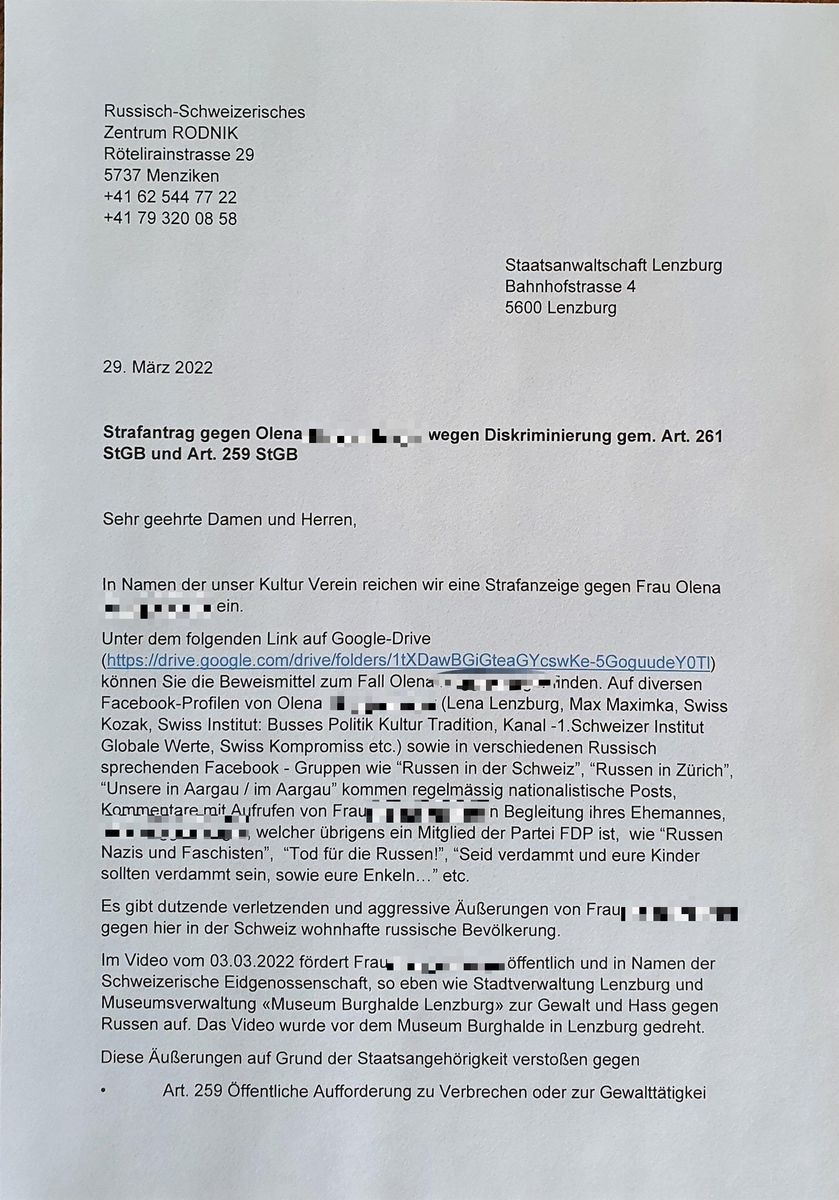 In a Facebook video, the wife of the Vice President of the FDP Seon, a Ukrainian, described Russians as “Nazis and fascists”. The Russian-Swiss cultural association Rodnik accuses her of inciting hatred and discrimination and files a criminal complaint.

The Russian-Swiss association Rodnik accuses the Ukrainian Olena Huggenberger of “calling for hatred and discrimination” and “public calls for crimes or acts of violence”. For this reason, they filed a criminal complaint with the Aargau public prosecutor’s office on March 29, as reported by the “Aargauer Zeitung”. Huggenberger is said to have made nationalistic statements on various Russian Facebook groups.

Among other things, according to the criminal complaint, she is said to have placed comments such as “death to the Russians” or “be damned and your children should be damned, as well as your grandchildren”. According to the Rodnik association, the statements are aggressive and offensive to Russians living in Switzerland. The criminal complaint also mentions a video in which Huggenberger concludes with “Honor to Ukraine, death to the Russian Nazis and fascists”. The statement was a public call for violence and hatred against Russians.

In the video, the Ukrainian says, together with her husband, the vice president of the FDP Seon, that the Burghalde Museum in Lenzburg AG has removed the term “Russian” from their invitation to the Easter concert. But the museum denies this in a statement published by the Rodnik association on Facebook, and distances itself from the couple’s political statements.

Adrian Schuler, spokesman for the Aargau public prosecutor’s office, confirmed to the “Aargauer Zeitung” that the club’s complaint had been received and that it was now being legally examined. If there is sufficient initial suspicion, criminal proceedings will be opened.

However, according to their own statements to the “Aargauer Zeitung”, the Huggenbergers have not remained legally inactive either and have filed a criminal complaint against the Russian-Swiss association. The allegations are the same: members of the Rodnik association have been denigrating them as “Nazis” for years.