Shanghai in lockdown, an Italian entrepreneur at Tgcom24: “We don’t see the light”

He lives in the eastern part of the city, which was the first to be closed on March 28th

. “Food resources have now improved, but in the first few weeks it was difficult. I had to fast for two days because we had very little food and we didn’t know how to get it. In recent times we have organized ourselves to make collective purchases together with the other condominiums”. A solution that, however, may not be enough: “From next week – he says – deliveries will be further scarce because the authorities fear that there is the virus inside the food deliveries, given that the city is in lockdown and it is not clear how it does it. epidemic to spread as it is doing “.

for the previous day. In the official counts they separate the symptomatic (3,590 in this case) from the asymptomatic (19,923). Due to the “Zero Covid” strategy practiced by China since the beginning of the pandemic, Shanghai has been placed in total lockdown since a few hundred new infections were registered a day. The closure of the most populous city in China is indefinite: “We do not see the light – Maria Ricucci continues to Tgcom24 – We hope that in mid-May we will be able to open the city, but these are hypotheses that we make among ourselves. We have no confirmation “.

. So it has been defined by many observers, due to the use of technology as a population control tool, between dog-robots walking the streets giving instructions to people and drones flying between skyscrapers ordering people to “keep to look after the desire for freedom “. 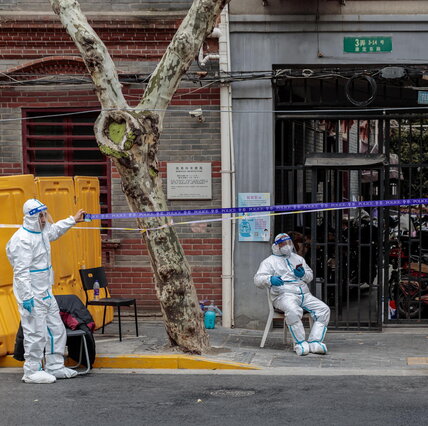