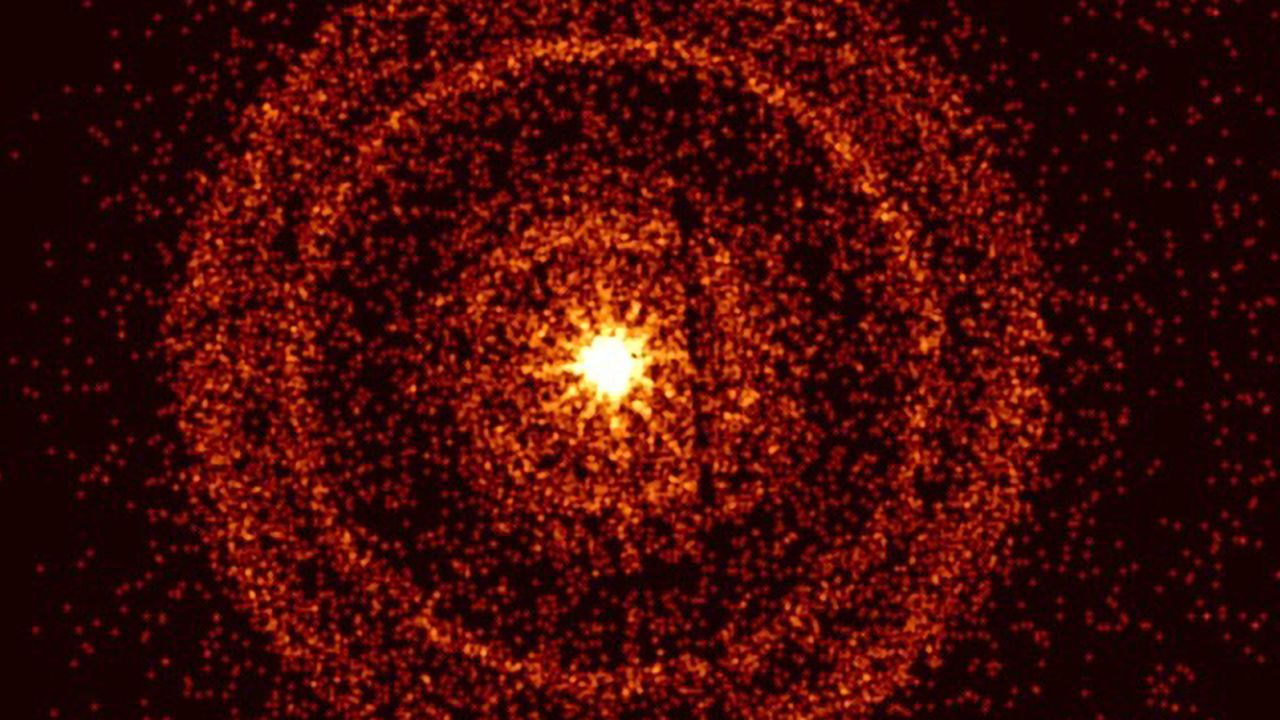 They discover a “cosmic spider” in space, source of gamma rays 0:40

(CNN) — Multiple telescopes in space and on the ground saw one of the brightest explosions in space on October 9. The burst could be one of the most powerful ever recorded by telescopes.

Gamma-ray bursts, or GRBs, are the most powerful class of explosions in the universe, according to NASA. Scientists named this explosion GRB 221009A, and telescopes around the world are still observing its aftermath.

Neil Gehrels’ Swift Observatory captured the afterglow of a gamma-ray burst on October 9. The bright rings are X-rays scattered by layers of dust in our galaxy. Credit: NASA/Swift/A. Beardmore University of Leicester

“Because this burst is so bright and so close, we believe it is a once-in-a-lifetime opportunity to address some of the most fundamental questions about these explosions, from black hole formation to testing dark matter.”

Scientists believe the long, bright pulse occurred when a massive star in the constellation Sagitta, some 2.4 billion light-years away, collapsed in a supernova explosion and became a black hole. The star was probably many times the mass of our sun.

The gamma rays and X-rays passed through the solar system, triggering detectors on NASA’s Fermi Gamma-ray Space Telescope, the Neil Gehrels Swift Observatory, and the Wind spacecraft, as well as ground-based telescopes such as the Gemini South Telescope in Chile has .

Newborn black holes eject powerful jets of particles that can travel at the speed of light, releasing radiation in the form of X-rays and gamma rays. After billions of years traveling through space, the exploding black hole finally reached our corner of the universe last week.

Studying an event like this can reveal more details about collapsing stars, how matter interacts near the speed of light, and what conditions might be like in distant galaxies. Astronomers estimate that we won’t see another gamma ray burst this bright for decades.

The source of the eruption looks far away, but astronomically speaking, it is relatively close to Earth, which is why it was so bright and lasted so long. The Fermi telescope tracked the eruption for more than 10 hours.

The Gemini South telescope captured this image of the aftermath of the eruption.
Credit: NOIRLab/NSF International Gemini Observatory

O’Connor was the leader of a team that used the Gemini South telescope in Chile, operated by the National Science Foundation’s National Optical-Infrared Astronomy Research Laboratory, or NOIRLab, to observe the aftermath on October 14 take.

“In our research group, we referred to this burst as the ‘BOOT’, or the brightest of all time, because if you look at the thousands of bursts detected by gamma-ray telescopes since the 1990s, this one stands out,” says Jillian Rastinejad , a doctoral student at Northwestern University in Illinois who led a second team using Gemini South.

Astronomers will use their observations to analyze the signatures of any heavy elements released by the collapsing star.

The bright burst also provided an opportunity for two instruments aboard the International Space Station: the NICER (or Neutron Star Interior Composition Explorer) X-ray telescope and the All-Sky X-ray Imaging Monitor at Japan, or MAXI. Combined, the two devices are called the Orbiting High Energy Monitors Alert Network, or OHMAN.

It was the first time the two devices, which were installed on the space station in April, could work together to detect a gamma-ray burst, and it meant that the NICER telescope could observe GRB 221009A three hours after its detection.