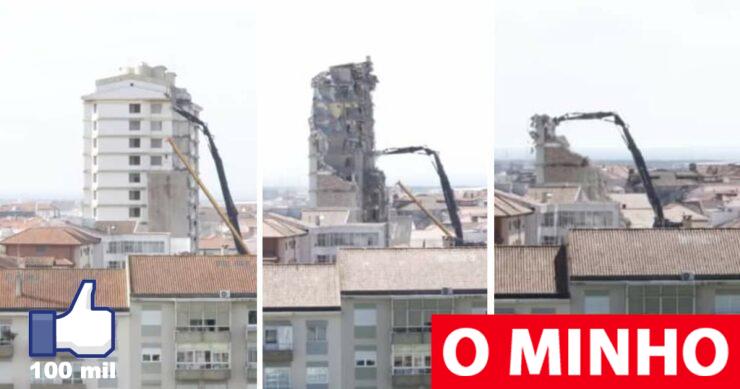 An impressive sequence of images, shared in a video on social networks, shows the evolution of the deconstruction of the Jardim Building, commonly known as the Coutinho Building, in the center of Viana do Castelo.

The record, which goes down in history, was developed by Nuno Brito Lopes (lopezi.com).

The 42 meters high of the “mamarracho” or “urban abortion”, as the former mayor, Defensor Moura, who started the project to requalify the historic center of the city, called it, began to be destroyed from the back to the front, facing to the Lima River, last February 4th.

The contract for the execution of the work, budgeted at 1.2 million euros, foresees that the profits resulting from the reuse and recycling of aggregates will revert to the construction company.

Initially, the VianaPolis project foresaw the implosion of the building, but from 2018 onwards, deconstruction was the alternative chosen as it provided for the use and reuse of materials, and caused less environmental impact.

Known locally as the Coutinho building, the Jardim building was built in the early 1970s. Its deconstruction had been planned since 2000, under the Polis program.

The project, started when António Guterres was Prime Minister and José Sócrates Minister for the Environment, provides for the construction of the new municipal market for the site.