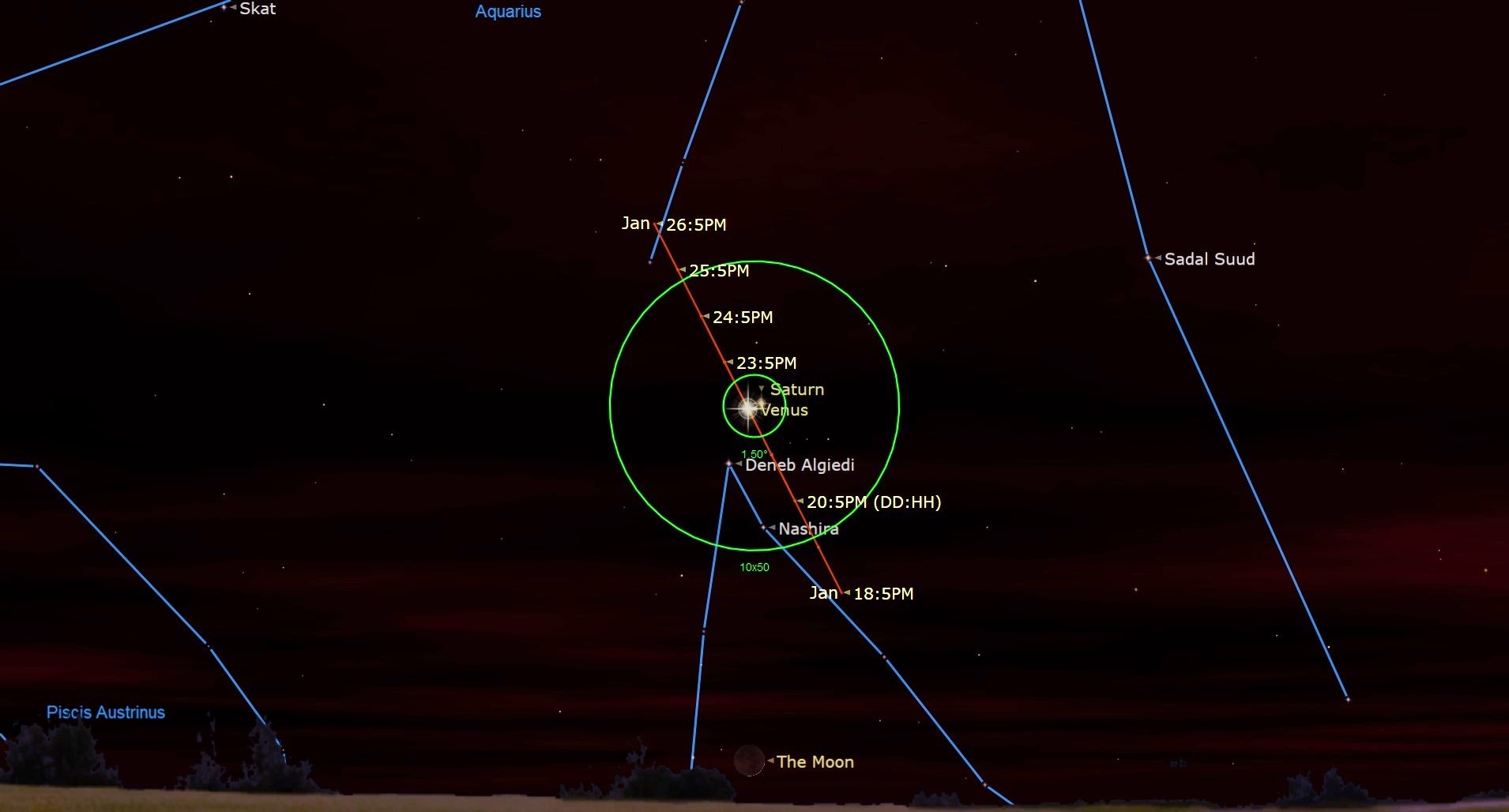 See Venus and Saturn snuggle in the sky Sunday (Jan. 22)

An illustration of the evening sky on Jan. 22 showing the conjunction of Venus and Saturn.(Image credit: Starry Night Software)

2023 is only three weeks old, but already we’re about to witness the closest observable pairing of naked-eye planets this year.

Venus and Saturn will be in conjunction on Sunday (Jan. 22), appearing close enough together in the sky to both be seen through a telescope. The close pairing will also be visible to the naked-eye.

Those two planets, plus a crescent moon, will be putting on an ever-changing display in the dusk during this weekend on into the start of next week. The planets will sink lower as the twilight deepens, so make sure you have a clear and unobstructed west-southwest horizon to get the best view.

Related: Night sky, January 2023: What you can see tonight [maps]

Anybody who looks roughly an hour after sunset, will immediately see Venus, which has been a fixture in the evening sky since the end of November. As it usually does, Venus is shining brilliantly (currently it’s at magnitude -3.9).

This is the beginning of a spectacular evening apparition of Venus, one that will see it literally soar high into the heavens by late spring while more than doubling in brightness.

The other planet is Saturn, which ranks as bright as a first magnitude star; at magnitude +0.8 it would place twelfth among the list of the 21 brightest stars (between Altair and Aldebaran). And yet despite this very respectable level of brightness, it appears dim next to the dazzling Venus; a tremendous difference in brightness in which Saturn will appear only 1/76 as bright. And Saturn may actually be somewhat hard to pick out through the evening twilight without optical aid. Binoculars will be most beneficial.

See also  A powerful battery and an attractive design. Specifications of the new Infinix Hot 20 Play phone (pictures) - a ball in the crossbar

But in contrast to the ascent of Venus, Saturn is lowering with each passing night and becoming increasingly immersed in the brightening evening twilight, for it is approaching solar conjunction on Feb. 16th.

Read more: Saturn: Everything you need to know about the ringed marvel

So, during this weekend, watch as brilliant Venus passes Saturn. On Saturday (Jan. 21), Saturn will stand just over one degree above and ever-so-slightly to the left of Venus. That measures out to approximately twice the apparent width of the moon.

By the following evening (Sunday, Jan. 22) Venus will sit just 0.35 of a degree to the left and slightly below Saturn. That’s equivalent to a little less than three-quarters of a moon width; you can fit both planets in the same field of view of a low-power telescope. Venus appears as a relatively small, featureless gibbous disk. As for Saturn, Murray Paulson in the Royal Astronomical Society of Canada’s Observer’s Handbook notes:

“With its incredible system of rings, Saturn is possibly the most spectacular planet in the Solar System. The rings are visible even in steadied (or image-stabilized) high-power binoculars and small spotting scopes.”

From personal experience, a telescope equipped with an eyepiece magnifying at least 30-power will readily bring the rings into view. They are currently inclined more than a dozen degrees to our line of sight.

Read more: Venus: The scorching second planet from the sun

And then there’s the moon

Adding to this evening display is our nearest neighbor in space; an exceedingly narrow (2% illuminated) crescent moon will slide past the planet duo during Sunday (Jan. 22) and Monday (Jan. 23) evenings. You’re most definitely going to need binoculars on Sunday to scan the bright twilight sky just a half-hour after sunset to initially catch a glimpse of the moon.

Venus should be easy enough to sight, but then there is the matter of catching Saturn as well as the sliver of the moon — just one day past new phase — which will be positioned at the end of a vertical line extending eight degrees below the two planets. (For comparison, your clinched fist held at arm’s length measures roughly ten degrees in width.)

The next evening — Monday (Jan. 23rd) — the entire configuration will have changed radically.

Check it out against a darker west-southwest sky about an hour after sundown. You’ll immediately notice that Venus has moved to a position about one degree to the upper left of Saturn. And a slightly wider (6% illuminated, and much easier to sight) crescent moon will have swept past the planets and will now be evident about eight degrees to their upper left.

Read more: What is the moon phase today? Lunar phases 2023

In reality, they’re all widely separated

Lastly, keep in mind that when you are looking at this gathering of the skinny moon and two planets in this weekend’s evening sky, that in actuality, they are all at varying distances from our Earthly perspective. The moon in fact, is now about as close to Earth as it will get all of this year, reaching an extreme perigee distance on Saturday (Jan. 21) of 221,700 miles (356,600 km), followed by Venus at around 143 million miles (230 million km). Finally, most distant of all, comes Saturn, at 998 million miles (1.61 billion km).

Joe Rao is Space.com’s skywatching columnist, as well as a veteran meteorologist and eclipse chaser who also serves as an instructor and guest lecturer at New York’s Hayden Planetarium. He writes about astronomy for Natural History magazine, the Farmers’ Almanac and other publications. Joe is an 8-time Emmy-nominated meteorologist who served the Putnam Valley region of New York for over 21 years. You can find him on Twitter and YouTube tracking lunar and solar eclipses, meteor showers and more. To find out Joe’s latest project, visit him on Twitter.