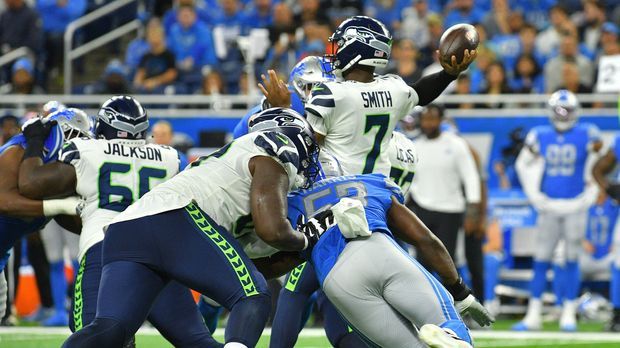 Munich/Detroit – Without German-American star receiver Amon-Ra St. Brown, the Detroit Lions lost the spectacle against the Seattle Seahawks by a minuscule 45:48. The 93 points between the teams is the 16th regular season highest scoring game. However, what was special was that this result had never happened before. In the NFL, this feat is called: Scorigami.

The portmanteau word Scorigami consists of the English “score” and the Japanese art of paper folding “origami”.

In fact, the Seahawks’ 48-45 was the 1,073rd scorigami in NFL history. The list of the final scores of a match that has never been achieved is equally long. Because of the different ways in which points are scored in American football, the possibility of results is also almost limitless.

Only some results where a team has only one point are mathematically excluded. For this rare case, a team would have to punt a safety on the opposing PAT as a defense. For example, a 1:1 is not possible, but there have already been 0:0 73 times – the last one however was in 1943. The most common result so far is 20:17 (276), followed by 27: 24 (226) – it was that game day between the Green Bay Packers and the New England Patriots.

It seems no coincidence that Pete Carroll’s Seahawks were part of the latest Scorigami. Between 2010 and 2018, the team achieved exactly one unique result in each season – the most famous was the 43-8 over the Denver Broncos in Super Bowl XLVIII.

The head coach joked about it in a press conference during this series: “It’s crazy. I don’t know how it happens. But I’m glad it happened again. We worked hard on it in the offseason.” So after three seasons of abstinence, his Seahawks did it again.

Want the most important NFL news, videos and data right on your smartphone? Then get the new running app with push notifications for the most important news in your favorite sport. Available in the App Store for Apple and Android.