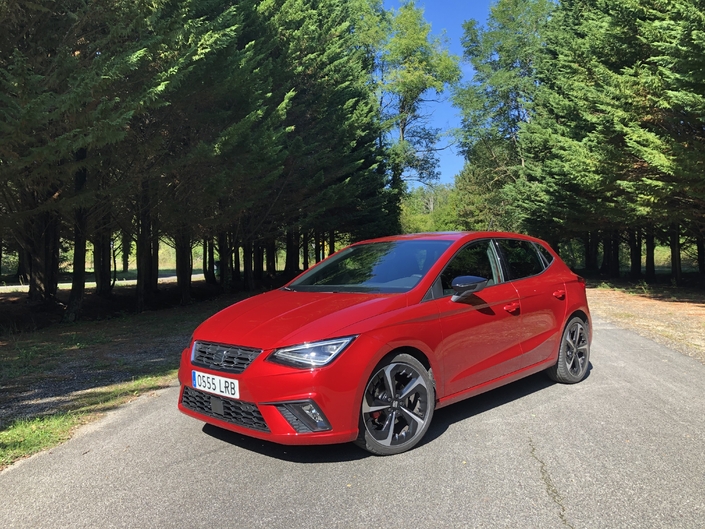 Hard to believe, but the Seat Ibiza you have in front of you has just been restyled. Proud of their production, the designers have remained cautious when it comes to making changes to the dress of their nugget. Nugget is a big word, because in Europe sales of the little Spanish girl are at half mast. On the Old Continent, the Ibiza is no longer even in the Top 10 of city dwellers. A ranking dominated by the French, Renault Clio, Peugeot 208 and the Toyota Yaris.

The very discreet refresh of the fifth-generation Ibiza, which appeared in 2017, is visible on the LED optics which are now standard and the brand’s monogram placed on the tailgate. The very Latin figure didn’t really need it. The capital seduction is always present and particularly in this “sporty” FR livery equipped with a sports chassis, optional 18 ” rims (450 €), a double exhaust outlet and a “Rojo Desire” color. »(650 €) particularly salient. A real little sportswoman in appearance.

In reality, it is a much wiser engine that is responsible for supporting the Ibiza in its task. It is a 1.5 gasoline 4 cylinder with cylinder deactivation. An engine present under the hood of many models of the Volkswagen group. This block is known more for its flexibility and sobriety than its vitality. It turns out to be an excellent everyday companion in town where its discretion and availability make driving very pleasant. Especially since it is exclusively available with the 7-speed automatic gearbox. Switching off and restarting the cylinders is imperceptible and has no effect on driving. On the other hand for fuel consumption this technology is beneficial. During our test carried out on a predominantly urban route, we noted an average of 6.3 l / 100 km. In 2021, the Ibiza FR TSi 150 suffers a slight penalty of 230 € maximum.

No change to be expected concerning the connections to the ground, another strong point of the Ibiza. This FR version displays a rather sporty character but does not mistreat its occupants despite the presence of firm suspensions and wide rims (18 ” as an option). The behavior is agile, rigorous and more fun than that of the Polo, its technical cousin. Too bad, the 1.5 TSi 150 is absolutely not in line with this philosophy. It lacks character, depth and sound. The chassis of the Spanish deserves a more muscular engine but the ecological penalty will have got the better of its sportiness. To get behind the wheel of a hot-blooded Spanish city car, you will have to wait until 2025 and the release of the Cupra “Urban Rebel”, this time in 100% electric. At present, only Ford manages to offer a sporty model. The Fiesta ST Line X equipped with the 1.0 Ecoboost 155 hp has more character than the Ibiza. And if you are looking for a “GTi” version, the ST version housing a 1.5 of 200 hp (penalty of 459 €) remains one of the last of its kind still on sale.

See also  "Bonds more attractive than they have been for decades"

Most of this restyling is on board. The upper part of the dashboard receives foamed plastics while the aerators have been pushed back at the ends and adopt a colored strapping. The larger central screen is now located higher. It is Android and Carplay compatible. Its operation is incredibly fast and efficient. The whole is more harmonious than before, with a perceived quality improvement.

What does not change and so much the better is the habitability and the cargo volume, clearly areas where the Seat is one of the benchmarks in the versatile segment. There is room to spare at knee level in the rear, enough to accommodate two large adults comfortably, and to put their luggage without problem in the 355-liter trunk worthy of the superior category.