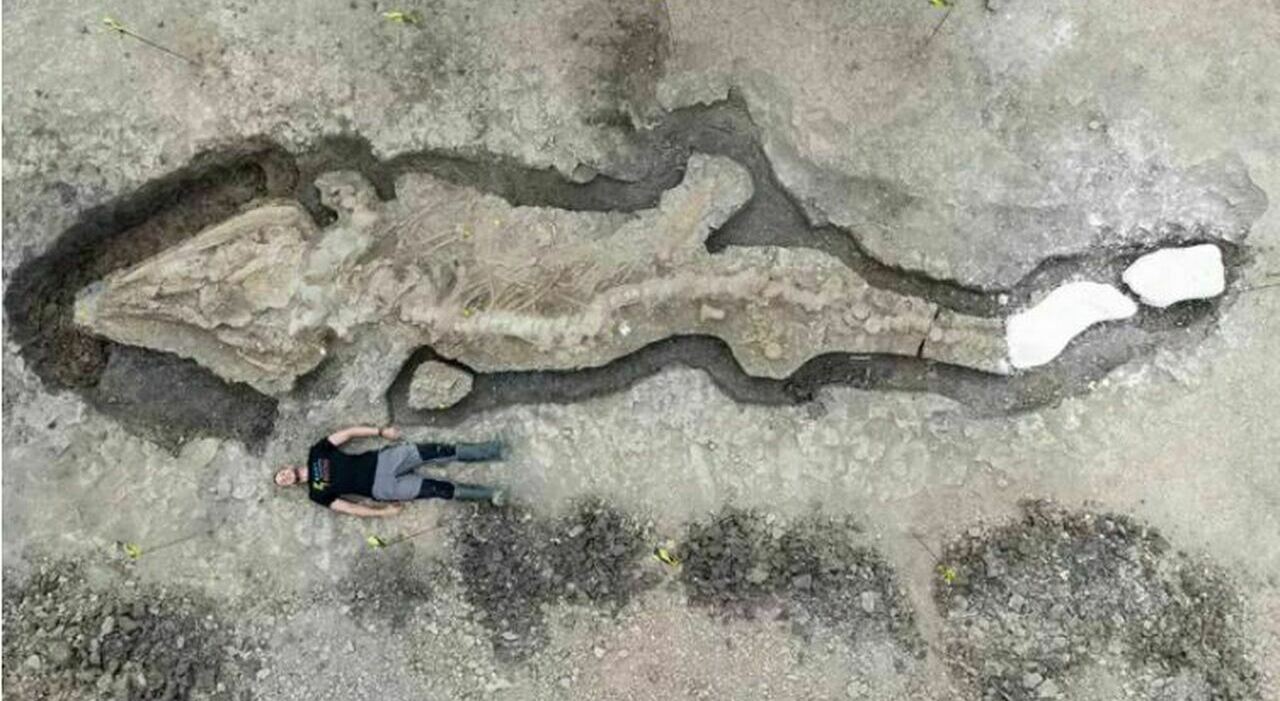 The man who was looking for rocks and found a prehistoric “sea dragon”. Or rather, a creature from the aquatic Jurassik World. But no Hollywood special effects. This is all true. At least, in fossil form. That of a monstrous sea dragon that seems to date back to 180 million years ago, and which boasts the impressive measure of over ten meters in length. It is the sensational discovery he made by chance Joe Davis, landscape architect and Head of Research for Leicestershire and Rutland Wildlife Trust, in the Rutland Nature Reserve, about 120 kilometers north of London. “It’s about a truly unprecedented discovery and one of the greatest discoveries in British paleontological history»excavation chief Dean Lomax called it during a speech at the University of Manchester, as reported by LiveScience.

Burial of a newborn girl 10 thousand years ago in Liguria: “It is the oldest in Europe”

The key clues were some curious “protrusions,” as Davis described it. The researcher was walking with his colleague Paul Trevor around the reserve, for a survey of the territory, when he intercepted some protrusions similar to rocks or clay pipes sticking out of the mud. The period was favorable. It was last summer, in fact, between August and September 2021, when the lake in the reserve records a drop in water level. To an investigation closer, those “rocks” seemed to recompose a sort of skeleton.

The story of the discovery

«We followed what unquestionably looked like a backbone – says Joe Davis – and Paul Trevor discovered something later that could have been a jaw. We couldn’t believe it». The exaggerated size immediately suggested that it was a dinosaur. The excavations continued until last December. And the team of paleontologists was able to clarify. They are the skeletal remains of an ichthyosaur, a prehistoric marine reptile, that swam in the seas when dinosaurs were alive about 180 million years ago. It had to be similar in the aspect of a dolphin: it swam and breathed air.

The mystery of the headless horse discovered in the Merovingian cemetery: “Knight’s tomb”

What is a sea creature doing (the largest and most complete fossil of its kind ever discovered in the UK) in Rutland County, which is 50 kilometers from the coast? By a stretch of the imagination we have to think that 200 million years ago, as ScienceNotizie points out, the region was covered by water. The highest ocean levels. Ichthyosaurs were marine reptiles that evolved in the Triassic period, about 250 million years ago, and disappeared from the fossil record 90 million years ago, in the late Cretaceous. The story of the discovery has become a documentary that will air on Tuesday 11 January on the British television series “Digging for Britain” on BBC Two. Meanwhile i remains of the sea dragon have been carefully removed from the site for study, although it is planned to return them to the site in the future so that they can be visible to visitors.