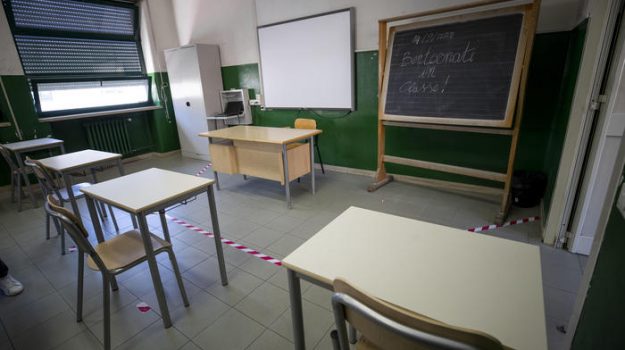 School in Sicily. Everyone in class, but not in Messina and Barcelona

The Region will not extend the Christmas holidays. This is the decision taken by the task force on returning to school, convened by the regional councilor for education Roberto Lagalla. The commissioner explained that “there are no legal conditions to further suspend teaching activities“. The director of the regional school office, Stefano Suraniti, stressed that Sicily still has lower pandemic data than the national average.

«After a short postponement, largely motivated by reasons of organizational and health care, from tomorrow (today, ed) the Sicilian students will return to class. Nobody hides the operational difficulties that, as in the rest of Italy, we can also encounter in Sicily, in relation to the progress of the pandemic and the extreme diffusivity of the virus which, fortunately, occurs mainly in mild clinical forms or completely asymptomatic ” declares the president of the Sicilian Region, Nello Musumeci.

“Also at the request of the Anci – underlines the regional councilor for education, Roberto Lagalla – who, together with the representatives of the school world, we thank for the active collaboration, theRegional Health Department will further strengthen the sampling and vaccination operations of the school population, also of that in the 5-11 age group which, to date, remains the most discovered in terms of immunization. At the same time, in a balanced and foreseen dosage of responsibility and weighing of the objective epidemiological criticalities, it will be possible to adopt the Dad in coincidence with situations of extraordinary elevation of the infectious risk, always on the basis of knowledge of health data. The return in attendance guarantees the virtuous re-aggregation of the school communities but it is our duty to keep a high degree of attention towards the progress of the pandemic situation which, however, does not find, within the schools, its main feeding point, given the respect the safety and protection measures envisaged for educational institutions by national and regional regulations “. An explanatory circular will follow for schools.

The mayors of Anci: “We will go on with article 50. Schools in dad”

There are still dangerous conditions, therefore it is still necessary to suspend on-site activities in schools. This is what he decided, we read in a note fromAnci Sicily, “the Assembly of Mayors, convened immediately after the task force of the regional government, noting that the three days of continuation of the Christmas holidays have not changed the daily growth of new infections, the stability of health and hospital structures and medicine on the territory nor recorded an adequate and proportionate increase in vaccinated “. The Assembly, continues the note, “noted that the Region has not further modified the school calendar confirming the reopening of schools starting from January 13, despite the lack of reliable data, the lack of FFP2 masks, adequate ventilation systems in school facilities as well as the absence of a mass screening program and the full operation of the Usca ” .

Thus, “the Assembly of Mayors with a very large majority expressed the orientation to have recourse to the powers of ordinance (article 50 of the TUEL), having regard to the specific conditions of the individual municipalities, given the existence of danger due to the lack of the necessary data and the inadequacy of the tools necessary for the implementation of the current regulatory framework, deciding to provide guidance for the suspension of activities in presence in schools of all types and levels in the respective municipalities until Sunday 16 January 2022, starting also from nursery schools and preschools without excluding the possibility of further restrictive measures and leaving the methods of carrying out the activities to the school authorities didactic. The ordinances will have an exceptional and temporary period of validity to allow the acquisition of data and interventions by the other competent authorities “.

“The assembly of mayors has, once again, in fact, requested clarity of certain data, municipality by municipality, and adequate decisions by the competent national and regional health authorities together with the implementation of all the formalities necessary to guarantee teaching in the presence in complete safety “, concludes the note from Anci Sicilia.

Today, therefore, I regularly resume teaching activities in the presence. Not in Messina, however, and in the other municipalities in which mayors, with the powers pursuant to article 50, have adopted their own ordinances with which they have ordered that the resumption of teaching activities will resume at a distance, with the dad. For example in the nebroidei centers of Messina, where the mayors seem willing to confirm the ordinances already issued to postpone the resumption of lessons in the presence on January 17, with the activation of the dad in the meantime. These are in particular the municipalities of Barcelona, Sant’Agata Militello, Capo d’Orlando, Capri Leone, Frazzanò, Galati Mamertino, Longi, Militello Rosmarino, Mirto, San Marco d’Alunzio, Alcara Li Fusi, Tortorici, San Salvatore di Fitalia, Acquedolci, San Fratello, Caronia, Naso , Castell’Umberto, Torrenova and Ucria. In the Ionian area in Castelmola, Letojanni, Mongiuffi Melia, Gallodoro, Scaletta Zanclea, Furci Siculo, Sant’Alessio Siculo, Itala and Antillo the complexes will remain closed until Sunday 12; in Savoca, Roccalumera, Pagliara, Mandanici, Nizza di Sicilia, Fiumedinisi and Alì until Friday 21st, in Santa Teresa di Riva until Sunday 23rd. On Thursday 13th, therefore, we regularly return to school in attendance only in Giardini Naxos, Forza d’Agrò , Alì Terme, Alì and Limina.

In Milazzo, on the other hand, the mayor Midili revoked the order, in the light of what was established in Campania by the TAR with respect to the provision of the governor Vincenzo De Luca.

At the moment none of these ordinances have been challenged, so they will come into force as of tomorrow. Further developments are expected, then, between Thursday and Friday, when Sicily should be declared an orange zone.

Barcelona, ​​the mayor confirms: “Effective ordinance, you go to dad”

“In order to dispel any doubts among learners, families and all school staff – writes the mayor Calabrò – I specify that the ordinance n.1 of 8.01.2022, with which I ordered the suspension of didactic and educational activities in the presence in the complexes of schools of all levels and educational services for children (including playrooms, aggregative centers for children and young people and other similar activities, indoors), and the public and private nurseries in the territory of the Municipality of Barcellona Pozzo di Gotto, from 13 to 22 January 2022, was not revoked and therefore it is fully effective.

I would also like to remind you that it was adopted after consulting the school managers of the area and, above all, in the light of the Report on the epidemiological trend in some Municipalities of the Province of Messina formulated by the ASP on the same January 8, which reported for Barcellona Pozzo di Gotto a significant increase on a weekly basis (from 27.12.2021 to 02.01.2022) of new positive cases (322 new cases), with a weekly incidence rate of 799 / 100,000 inhabitants, suitable for integrating the conditions of exceptionality and urgent need to protect public health, as well as the “… circumstances of exceptional and extraordinary necessity due to the extremely high risk of spreading the Covid-19 virus in the school population …” referred to in art. 2 of the Ordinance of the President of the Sicilian Region n. 1 of last January 7th. This incidence rate, however, appears to be on the rise in the last few days. The didactic and educational activities in presence, therefore, in Barcellona Pozzo di Gotto remain suspended until the end of January 22, 2022, as required by the trade union ordinance no. 1/2022. In any case, the adoption of individual protection measures remains fundamental for the success of the pandemic containment campaign; therefore the distance, the constant use of protective masks, the constant and thorough hygiene of hands and objects, and all those virtuous behaviors that we have learned about during the pandemic. And above all, let it not escape anyone that the experience of recent months has irrefutably demonstrated how vaccination is the most powerful weapon against the coronavirus “.

The CGIL: “Going back to school is a very serious mistake”

“Going back to school tomorrow (today, ed) is a very serious mistake. It is absurd to hope to become an orange or red zone to keep schools closed. This means hoping for an increase in hospitalizations in intensive care “. This was stated by the secretary of the Flc CGIL Sicily, Adriano Rizza, on the sidelines of the pandemic task force meeting held this morning. “We don’t just say that we must delay the return to school – he adds – but also the scientific community, as well as authoritative experts such as the consultant of the Ministry of Health, Professor Ricciardi”.

“The time has come for the national government – continues Rizza – to assume the responsibilities that fall to it and make a mea culpa with respect to everything that has not been done. The promises on free tampons and on the supply of ffp2 masks, among other things only in special cases, we know with certainty that they will be difficult to achieve “.

“The tracing and supply of protection devices are two fundamental conditions – remarks Gaetano Agliozzo, secretary of the Fp Cgil Sicilia – to ensure safe return to school. Conditions that have been disregarded “. “From the debate – continues Gabriella Messina of the Sicily CGIL – the difficulties and criticalities linked to an ongoing epidemiological trend have emerged, requiring adequate strategies and measures, none excluded, and concrete investments invoked for some time to guarantee the school in safety”. For Katia Perna of the Flc CGIL Sicily “The difficulties continue in finding substitutes for the replacement of absent staff and communications relating to the positivity of the students and all this while we do not know that new measures have been adopted to strengthen and make tracing effective and timely”. “The reopening – concludes the headmaster Franco Pignataro – does not solve the problem of face-to-face and dad teaching, which is very contradictory from a methodological point of view. As usual, the delays in the interventions create these indecipherable conditions ”.