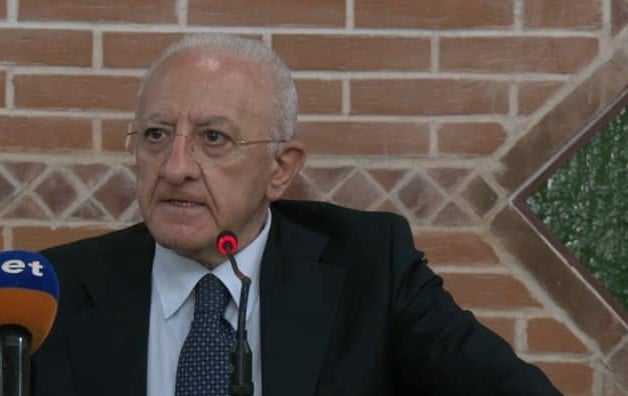 School, De Luca’s prediction: “you will see what will happen”

The reopening of schools in Campania it worries some parents but makes many others rejoice, opposed to distance learning. The exponents of the center-right, the grillini, the government are also exulting, clearly in sanctioning the didactic importance in the presence of De Luca, however, rejected by the Tar, it is certain that chaos will be with the schools open: “Time a week and then let’s see what happensHe would have told his folks yesterday.

In fact, the TAR ruling represents a defeat of the governor, considering that the judges have exposed all the criticalities of Campania, even from a health point of view.

According to the Campania TAR, “the legislation of primary rank, and therefore superordinate with respect to the possible exercise of administrative power, specifically regulates the management of services and educational activities in the constant pandemic, in order to ‘prevent contagion’ and guarantee, at the same time, their completion ‘in presence’ “. This “excludes that there may be room, in the sectors considered, for the issue of contingent ordinances that regulate the same sectors of activity differently and which, given their abstract ‘contingent’ nature, presuppose that it is not possible to identify a different one ‘ rule of the concrete case “.

The judge recalls that “the emergency orders are justified in the legal system, and are made law in the specific case, only where, in addition to the urgency, there is the lack of another rule that has foreseen the case and has regulated it”. This is not the case, according to the Campania TAR, as the decree law “took into account the specific emergency” and governed the school sector “precisely in the case taken into consideration by the contested ordinance, namely the permanence of the state of emergency with its connected and entirely predictable factual precipitations (possible increase in infections, inevitable stress-test imposed on health structures, suffering of the transport system) “.

“In further support of the overall unreasonableness of the measure, no restrictive measures have been taken on other activities, which refers to the omitted consideration of the absolute necessity of the generalized restrictive measure, incident to the state and despite the declared need for collective protection, on school attendance alone with respect to which, unlike the legislative choices, the ‘zero’ option was favored “. “The represented difficulties of the regional health system, far from justifying the adoption of the suspensive measure – reads the decree – rather demonstrate the lack of provision of adequate preordained measures to avoid the widely foreseeable risk of ‘collapse’ also on the transport system ; with the consequent confirmed impossibility of qualifying a measure as ‘contingent’ which is explicitly aimed at avoiding a widely foreseeable danger only by considering the recent past ”.

Campania is not classified in the “red zone” , writes the TAR Campania, and therefore “the only data of the increase in infections, not even specifically referred to the school population and moreover not certain, and the mere possibility of the onset of ‘serious risks’ predicated in terms of eventuality, do not root for itself only the emergency, exceptional and extraordinary situation which in the abstract could allow the derogation from the general regulation “.

“Moreover – the decree reads – there is no ‘outbreak’ or risk specifically referred to the school population, generally understood”. According to the administrative judge, the suspension of teaching in the presence decided by the president of the Campania Region Vincenzo De Luca “does not even seem to underlie a complete assessment of ‘adequacy and proportionality’, since no reference is made, in the contested provision, to the opposing subjective positions of law ( education, in its widest extension, also formative of the personality of minors), also taking into account the sacrifice imposed by the previous prolonged limitation of teaching, nor the impossibility of balancing them, in a precisely ‘adequate and proportionate’ way, with the highlighted priority protection of the public interest in collective health “.

According to the Campania TAR, “the suitability of the measure is also doubtful, taking into account the prolonged closure connected with the Christmas holidays, which has not, however, avoided the recorded increase in infections”.