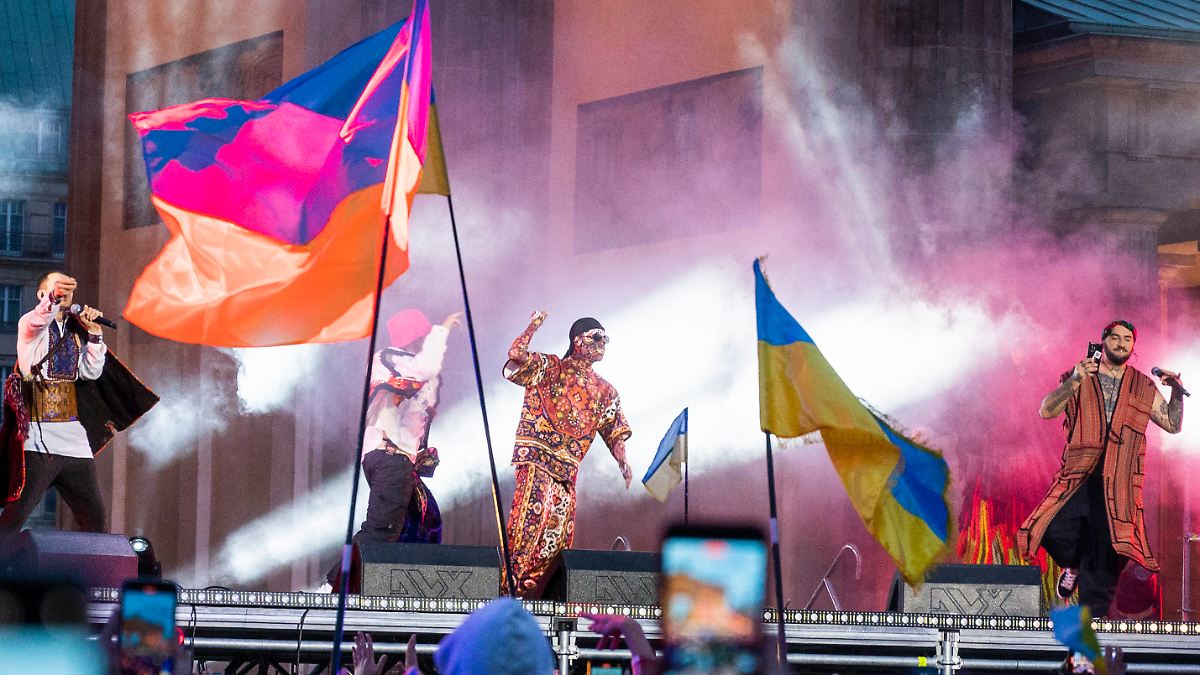 Scholz: “Stand by your side”: Ukrainian stars play in front of the Brandenburg Gate

Scholz: “Stand by your side”
Ukrainian stars play in front of the Brandenburg Gate

War has been raging in Ukraine for more than three months. Stars from the attacked country gather in Berlin to collect donations for hospitals. Chancellor Scholz speaks up via video message.

With a show in front of the Brandenburg Gate in Berlin, music stars from the Ukraine commemorated the war that had been raging in their homeland for almost 100 days and solicited donations for hospitals. Around 15,000 spectators watched the donation marathon on site on Sunday evening, according to the organizers and the police. Ukrainian TV channels also broadcast the charity event live, and broadcasters from other countries also broadcast it.

Video messages from many international celebrities and politicians were shown during the show, including Chancellor Olaf Scholz. The SPD politician assured the people of Russia’s attacked Ukraine of Germany’s solidarity. “We stand by your side,” he said in English. “Your hearts and thoughts are with you today and every day since Russia attacked your country.”

Together with friends and partners, Germany is providing financial support to ensure that the Ukrainian economy does not collapse, Scholz said. Germany is sending weapons, and almost 800,000 Ukrainians have found refuge here. In addition, plans for post-war reconstruction were being made. “Because this war will end,” said Scholz. “We stand united – for Ukraine, for freedom, the rule of law and dignity. As European sisters and brothers.”

This year’s winners of the Eurovision Song Contest, the Kalush Orchestra, had a performance that was acclaimed by the live audience. They performed their song “Stefania”, with which they won the 66th ESC in Turin two weeks ago.

The proceeds from the donation show in Berlin are intended for hospitals in twelve Ukrainian regions that treat the injured during the Russian war of aggression, the Embassy of Ukraine in Germany said. They could use the money to buy medical equipment such as X-ray machines.

See also  35 vehicles involved in an accident in Florida