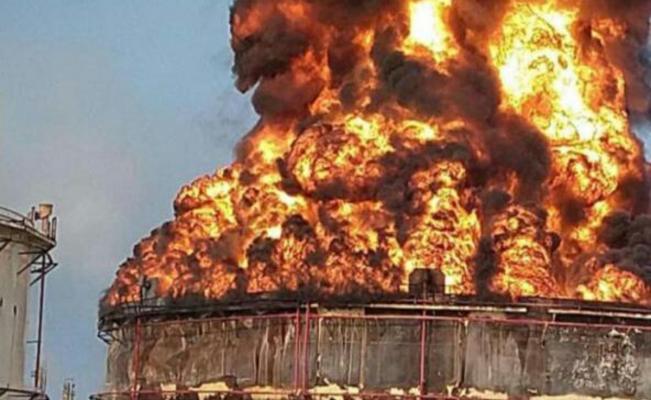 Salina Cruz declares an emergency and enlists a shelter due to a refinery fire in Oaxaca; there are 150 families at risk

Juchitan. – Behind the reactivation of the fire in the refinery “Antonio Dovali Jaime”, the municipal president of Salina Cruz, Daniel Mendez Sosainformed that the permanent session was installed Municipal Civil Protection Counciluntil the end of the emergency hydrocarbon processing plant.

In a press conference, the mayor of Buenos Aires said that according to the reports of the authorities of Petróleos Mexicanos (Pemex) of the Secretary of the Navy (Semar), the fire that was reactivated at dawn today, in the TV-102 tank loaded with 30 thousand barrels of regular gasolineis controlled, while the fuel continues to be consumed.

Given the flames that reach just over 100 meters in height and the enormous column of black smoke that rises hundreds of meters, the Salina Cruz authorities have the Municipal auditorium to enable it as hostelin case the wind changes direction and affects the 150 families of the town of Boca del Ríowhich is located to the east of the refinery.

#EnVideo The municipal government of Salina Cruz participates in the tasks to control the fire at the “Antonio Dovalí Jaime” refinery, despite denouncing that Pemex notified the reactivation of the fire late, which forced work to stop at the plant.

In the morning, when the authorities of Pemex declared the emergency and suspended the operation of the refinery, the possibility of requesting the Pemex Coatzacoalcos support for the shipment, by air, of a substance known as foam to suffocate the fire, however, it seems that the petroleum engineers are going to allow all the gasoline to be consumed.

The mayor stressed that he has maintained communication with the refinery manager Ricardo Martínez Morales and with the Vice Admiral Commander of Naval Zone 12, Carlos Eduardo L’Eglise Escamilla. According to what Petróleos Mexicanos has reported through its manager in recent hours, the fire is controlled in the one hundred thousand barrel tank.

The authorities of Pemex, pointed out the municipal president, Daniel Méndez Sosa, reported that, at the time of the fire, the damaged tank had 30,000 barrels and it is expected that, in the next 24 hours, the incident will be completely extinguished, by the total fuel is consumed, meanwhile, the columns of fire and smoke blacken the sky of the port.

Almost 100 people work in the area of ​​the incident, almost in the center of the refinery, such as the firefighters who cool the other four tanks with a capacity of one hundred thousand barrels of fuel, which are separated about 200 meters away and protected by a fence. two meters high, and the petroleum engineers who assess the risks.

The fire started shortly after two in the afternoon yesterday, apparently it was put out, but it was reactivated at six in the afternoon, and in the same way, the fire ended, but at dawn today it was revived and the emergency was declared. which forced the paralysis of the 26 plants that operate in the Salina Cruz refinery, which will celebrate its 43rd anniversary next August.