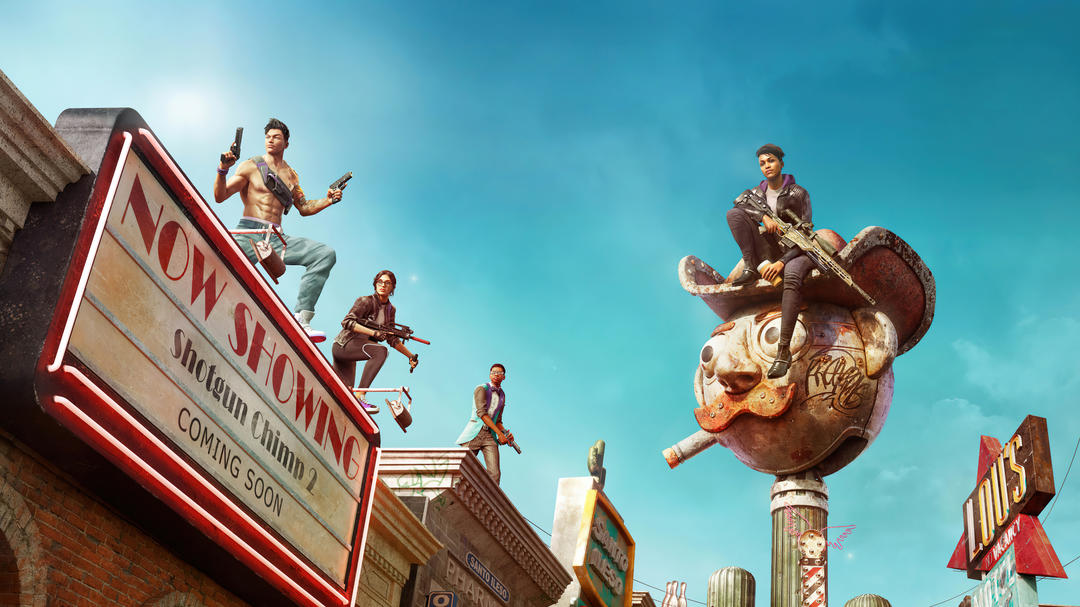 With Saints Row 4, Volition went so far off course that the developer didn’t really see a way forward. After all, the computer simulations, superpowers and alien invasions had little to do with the original street gangs. Fortunately, there is always a strict way back for media: the reload. The new Saints Row, without subtitles or numbers, is a completely new beginning, with a new city, new characters and a new gang to start your own.

The setting for this story is Santo Ileso, a fictional city in the southeastern United States, near the border with Mexico. The dusty but characterful town and surrounding desert groans not only under a permanent heat wave, but also under the yoke of three gangs that rule the various districts. Or yes, ‘gangs’… only Los Panteros still fit somewhat within the stereotypical image of a street gang. The Idols consist of colorful anarchists who take selfies in the middle of a battle, while the Marshalls are more like a private military company.

You and your roommates all happen to be in a different hallway. It doesn’t seem like a lot of money and if you’re struggling to pay the rent again, you’re tired of working for others. Time to start your own way: the Saints! What follows is a true origin story about the founding and expansion of the Saints, in which you are constantly on the road with your housemates and create an ever closer bond with them.

If you think Saints Row is going to take it easy now, the game will quickly help you out of that dream. Already during the creation of your character, the game seems to take itself anything but seriously, as you can create the Joker, a green alien robot or Donald Trump without too much effort. Impersonating yourself is of course also an option and you can fully customize your character at any time. Then blast through an abandoned western amusement park with modern weaponry as explosions and gliders fly around your ears. And one of your first special skills to unlock is one where you stuff a grenade into an enemy’s pants and then throw him or her back at their friends as a live explosive. Welcome to Santo Ileso, where it’s not even the craziest day of your week.

Truth be told, nothing ever goes normal in the world of Saints Row. The story missions are a series of grueling climaxes. One moment you’re blowing up an entire natural history museum, the next you’re committing a classic train robbery, or you’re crashing into a luxury yacht full of fireworks – all of which, of course, go up in the air. But even between the missions there is little talk of calm driving.

Santo Ileso may be free to explore, but Saints Row is simply not made for leisure. If you hit a fire hydrant in the corner, the water jet is strong enough to swing your car meters into the air. If you ram a billboard, the whole thing immediately collapses with brute force. Don’t be surprised if you suddenly hear explosions in the distance; sure a motorist just hit a sidewalk. Sometimes it is enough to explode immediately. Two decades later, the Red Faction DNA is still strongly felt by developer Volition: everything must be broken and preferably as spectacular as possible.

Saints Row thrives in that chaos. Without a doubt, one of the funniest missions is one where you tow a Dixi toilet behind your car and leave as much street furniture in ruins as possible. Yet this time, Volition resists the temptation to go all the way again. While you can still choose to hop around bare-chested (and if you don’t put your pants on, a neat emoji sticker of your choice will be put over it), there are no sex toys as weapons and no alien enemies to fight against. to fight Although the humor is sharp and frequently rude, it doesn’t descend into pubescent underpants fun or cheap parodies. Saints Row is primarily itself and shines in that role more than ever before.

Central to this is the development of your own gang. You plan your first missions from your apartment, but you soon move to a new base. What begins as a rickety ruin turns into a dignified headquarters as the story progresses. You also build a number of companies around the city to bring in money. A garage is obviously a logical asset for your gang (after all, you have to pimp your car somewhere), but Saints Row wouldn’t be Saints Row if it weren’t for an insurance fraud company, arms wholesaler, or LARP castle.

See also  MADNESS BY PAULO DYBALA in ROME. IMPRESSIVE presentation of the Argentine in the Italian capital - ESPN Deportes

These establishments are reminiscent of the ones you can buy in Grand Theft Auto: Vice City, as they all also involve a series of themed missions. For example, your garage requires you to steal specific cars, while the insurance fraud company brings back the familiar missions where you have to throw yourself in front of moving traffic to take as much damage as possible. For your arms wholesaler, you can publicly ‘demonstrate’ the firepower of the heaviest weapons.

But where the companies in Vice City were in fixed locations, in Saints Row you choose which company you place where. This may seem like a trivial difference, but it makes the impact you and your Saints have on Santo Ileso immediately apparent. You’ll even see billboards for your companies along the way. You really visibly conquer San Ilesos district by district.

In any case, San Ilesos turned out very well. The city is clearly not made as a serious decor, but mainly as a cool playground. There is a casino strip, prominent skyscrapers dominate the skyline, and there is desert around it for off-road racing. There are also all kinds of tourist squares and places where you can discover more about the history of the fictional town.

Perhaps the best part of all is that you can explore the game world with friends, as the entire game can be played in co-op. You will be in the host’s city, so you will also see his or her buildings and progress. You just take your progress with you to ‘your’ Santo Ileso. Side missions are then immediately crossed out and completed story missions can be skipped once you reach that point in the story. The entire co-op mode is well put together, although we sometimes had trouble joining each other’s game.

Unfortunately, not much else goes well with it. We could write a book about what’s broken about Saints Row and then probably forget enough to fill a sequel. Clothing disappears or loses customizations, limbs become invisible due to certain clothing combinations, your character’s voice sometimes changes spontaneously, it often happens that you suddenly can no longer use weapons, your skills sometimes disappear or simply refuse, and sometimes you even succeed not to complete. a mission, for example because a cutscene won’t play or because you can’t talk to a character.

And then we haven’t even mentioned the pertinent problems, like the drop-in, pop-up, navigation of its own accord, subtitles that are hopelessly out of sync with the audio, and mission descriptions that don’t make sense. Don’t be surprised if it says you have to destroy five police cars, when all you have to do is peacefully activate some tourist signs. There are also all kinds of graphics options, but in 4k the game is almost unplayable due to the ghosting. Ray tracing in some other modes also seems to add hardly anything. So we mainly stuck to the mode in which a 1440p resolution is combined with a high frame rate.

It should be clear that Saints Row doesn’t have the finishing or production budget of Rockstar’s games, just to draw the comparison to GTA again. Although the list of errors is large, they are usually quickly fixed by restarting the game. So they are only a mild irritation that rarely gets the better of you. Sometimes the bugs even unintentionally add to the hilarity. For example, it sometimes happens that your character gets stuck in a certain animation and therefore keeps punching himself in the face, and you can even side-slash a heavy truck on a motorcycle.

However, the bugs should definitely not remain nameless and this stands in the way of an even higher final score. Saints Row is doing really well and Volition successfully uses the reboot to bring out the best of Saints Row, namely building your own crime organization. The result is a game that may be even closer to classics like Vice City and San Andreas in terms of atmosphere and structure than its successors, but in terms of finish, it just doesn’t come close to those games. Saints Row won’t go down in the history books as a classic either, but there’s no doubt that there’s a lot of fun to be had with the game.

Saints Row will be available August 23 for PC, PlayStation 4 and 5, Xbox One and Series X|S, and Google Stadia. For this review, the game was played on an Xbox Series X.