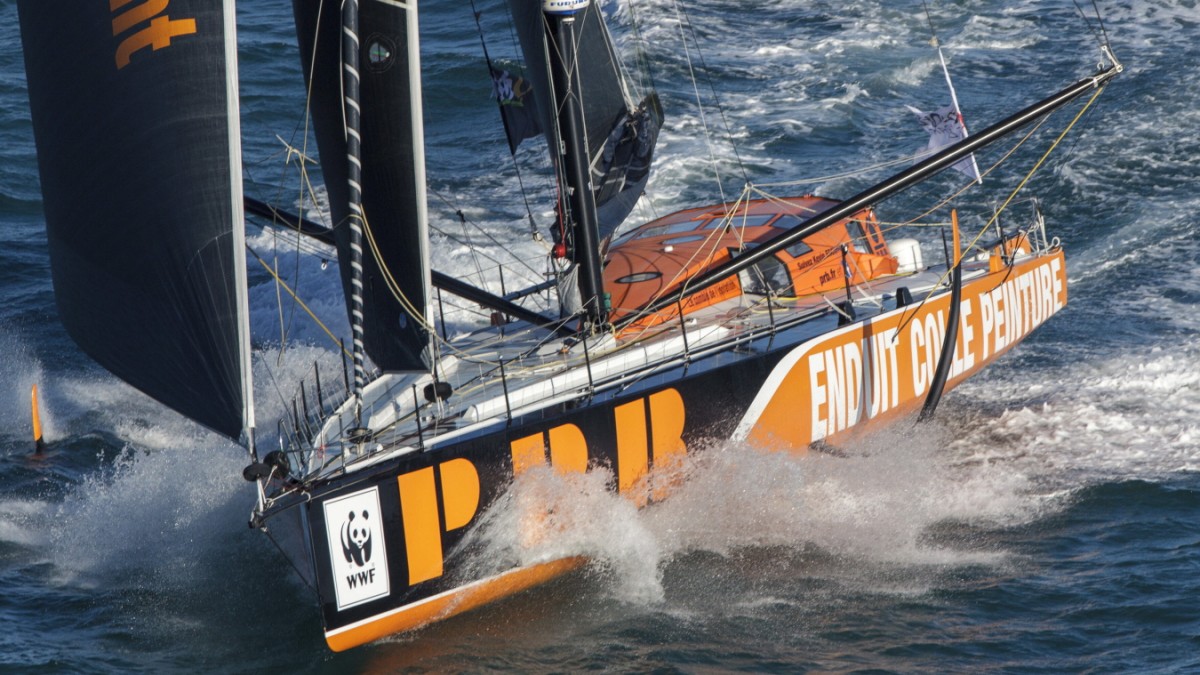 Kevin Escoffier spent almost twelve hours on a small life raft in the ten-degree cold sea. Thrown back and forth by the waves, he waited for rescue – with a light and the hope of a promise.

By Monday afternoon, the 41-year-old French sailor cut through the choppy sea with his well-equipped yacht, he was third in the race around the world, the Vendée Globe. But at 2:46 p.m. he made an emergency call 840 nautical miles southwest of the Cape of Good Hope. The region between the fortieth and fiftieth parallel is feared for its raging winds: The “Roaring Forties” roar over the water, unchecked by a land mass, and pile up the waves. One of these waves seems to have become Escoffier’s undoing.

His yacht was submerged in a wave, he later reported via video. “It folded the ship,” he stammered: “I’ve seen a lot, but that …” Escoffier was just able to send a message: “I need help. I’m sinking. This is no joke.” The next wave paralyzed the electronics on board.

The emergency call reached Jean Le Cam. In the vast expanse of the Southern Ocean, it was closest to the scene of the accident, and Escoffier could not have wished for a better savior than the “King”, as they call 61-year-old Le Cam in France: a man with vice hands and teddy bears on board, the in moments of danger reacts cooler than the Arctic Ocean. Someone who had to fear for his life for hours at the Vendée Globe regatta.

In fact, Le Cam reached his boat around 5 p.m. Yes we Cam the last known position of Escoffier. But waves five meters high and strong wind made the recovery impossible at first. The seafarers were able to talk to each other for a short time, but then Le Cam had to turn off: “I told him I was coming back,” Le Cam said later, also via video. But in the rough seas he lost sight of Escoffier again. And it got even more complicated: In the falling darkness, rescue seemed almost hopeless.

Boris Herrmann also rushed to help, the Hamburg sailor met with Seaexplorer at 11 p.m. Together with the French skippers Yannick Bestaven and Sébastien Simon, they supported Le Cam in the search. “It was like a needle in a haystack,” reported Boris Herrmann.

When Le Cam was preparing to wait for dawn, he discovered a light that was reflected by the waves. It was Kevin Escoffier. “Desperation turns into an unreal moment,” Le Cam reported later. He described the rescue briefly: “I threw him a life preserver. He caught it. That was it.” At 2:06 a.m. Escoffier climbed on board unharmed. “Like a miracle,” said race director Jacques Caraës.

Escoffier and Le Cam commented on the course of the accident in front of the video camera on the high seas: his boat PRB I bored into a wave and broke through in the middle, the Frenchman said, still agitated, sometimes he seemed close to tears, then again he broke into wild laughter. “I’m sorry for Jean,” said Escoffier and apologized to his rescuer: “He had an incredible race. I screwed it up for him.” Le Cam reassured him: “Never mind. Zen, Zen.”

The Vendée Globe is considered the toughest solo regatta in the world. They have already paid with their lives to two seafarers. But besides the tragedies there are also stories of camaraderie and friendship; and in this episode of Monday night it seems to come full circle. Because once before, the PRB and Le Cam were the focus of a sea rescue – but with reversed roles.

In 2009, the then skipper of the PRB, Vincent Riou, turned the ship around in front of the dreaded passage from Cape Horn to come to the aid of his pursuer: Jean Le Cam. The “King” capsized, but was able to save himself in an air bubble under his ship. 16 hours later, his competitor pulled him out of the water. The PRB was also damaged during the rescue operation. The two saved themselves in the Beagle Channel, where the Chilean Navy towed them away.

Vincent Riou was then placed third in the ranking on an honorary basis. The two sailors share a deep friendship to this day. Now Le Cam was able to give something back and show its appreciation to the PRB skipper. Even if the boat is no longer the same, of course. Today’s PRB has long been a state-of-the-art foiler, while Le Cam is sailing in his boat without hydrofoils.

How it will go on with Escoffier is open. Le Cam shouldn’t have enough food on board for both of them. The boats involved in the rescue operation are allowed to continue their races – probably with a time bonus. And with the knowledge that there is something bigger than winning a high seas regatta.