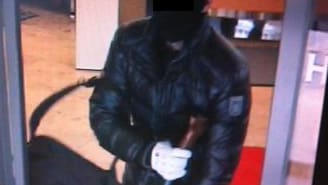 Sadri T. (29) is said to have committed a total of eight robberies in three cantons

From May 30th, a four-day trial against three men will take place before the Laufenburg AG district court. They are charged with multiple qualified robbery, among other things. The court wants to publish what they have actually done on the day before the hearing.

Blick research shows: The gang is said to have committed a series of robberies. Sadri T.* (29), the main suspect, is said to have been involved in eight robberies in three cantons. He usually came masked, dressed in black, armed and was able to escape undetected in the end. Some of the traumatized employees were left behind.

On July 25, 2019, T. is said to have overpowered an employee of the Coop petrol station shop in Zwingen BL shortly before 4:30 a.m. He is said to have threatened her with a gun and again made off with several thousand francs.

Accomplice is said to have been waiting in the car

On September 16, 2019, T. is said to have been involved in a robbery again. At that time, shortly before 4:30 a.m., a man with a pistol threatened an employee at the Tamoil Avec shop in Frick AG. The victim managed to flee, after which the perpetrator drove away in a silver-grey car in which an accomplice was driving.

T. and one of the accomplices are said to have attacked the Coop gas station in Wettingen AG shortly after 4:30 a.m. on September 20, 2019. They are said to have threatened the employee with a gun. When she opened the safe and there was no money in it, the men fled.

Two employees were tied up

On October 11, 2019, T. is said to have struck with two accomplices. This time, shortly before 7.15 a.m., two employees of the post office in Zwingen BL were threatened by three men with a gun. Both victims were then tied up. Then the perpetrators fled without taking anything – for unclear reasons.

Alone again, T. is said to have entered the branch of the Basellandschaftliche Kantonalbank in Breitenbach SO on October 17, 2019 shortly before 11:30 a.m. After an employee handed him several thousand francs, the armed T. is said to have fled.

Gas station in Frick attacked for the second time

On November 4, 2019, T. is said to have acted again with an accomplice. Again it is the Tamoil Avec shop in Frick, which was entered by two men at around 8:40 p.m. Again they capture several thousand francs.

T. and an accomplice are said to have finally carried out the last robbery on November 11, 2019, shortly before 4 a.m.: At the Coop petrol station shop in Gibenstorf AG, an employee is threatened, the perpetrators flee with the stolen money.

Sadri T. should go to jail for 8½ years

For reasons of space and security, the trial is to take place in the building of the mobile police force in Schafisheim AG. According to Blick information, the public prosecutor wants to demand a prison sentence of 8½ years for Sadri T. The verdicts are to be announced on the last day of the trial. It is the presumption of innocence.