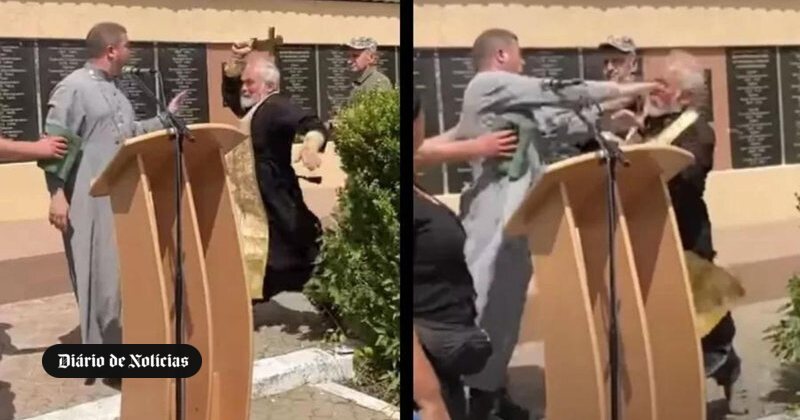 A Russian Orthodox Church priest, Mykhailo Vasylyuk, beats Ukrainian chaplain Anatoliy Dudko with a cross during the funeral of a Kiev soldier. The news the respective video was advanced by the Italian agency ANSA.

A priest of the Moscow Patriarchate attempted to hit a representative of the Ukrainian Church with the cross he wore around his neck during the funeral of a Ukrainian soldier in a rural village #ANSA https://t.co/hKYYmPyK6N pic.twitter.com/gtGeRvJS8v

The attack took place in the Ukrainian city of Mykolaiv on July 22, as Anatoly, a member of the Ukrainian Orthodox Church, was celebrating the funeral of soldier Oleksandr Zinivy.

The images were released this Friday by the local press. It all happened due to the fact that the Ukrainian parish priest allegedly insulted Putin and blamed him for the war in Ukraine during his speech, something that angered the Russian Orthodox and motivated the aggression.

In the video that runs on social media, the Russian priest is seen walking up to the altar at the moment when Mykhailo Vasylyuk was speaking. With a cross in his hand, he started by pushing him and then tried to hit him with the cross. The case did not take on greater proportions due to the prompt intervention of two soldiers who were at the altar.

Local activist Serhiy Timkov, in a message posted on Facebook, said that Anatoliy suffered minor injuries and that a cross he had around his neck was broken by Father Mykhailo.

See also  Airpocalypse in the North Pole. But seen nothing of the sort

According to the Vinbazar website, Vinnytsia city police have been notified of the incident and the case is being investigated.