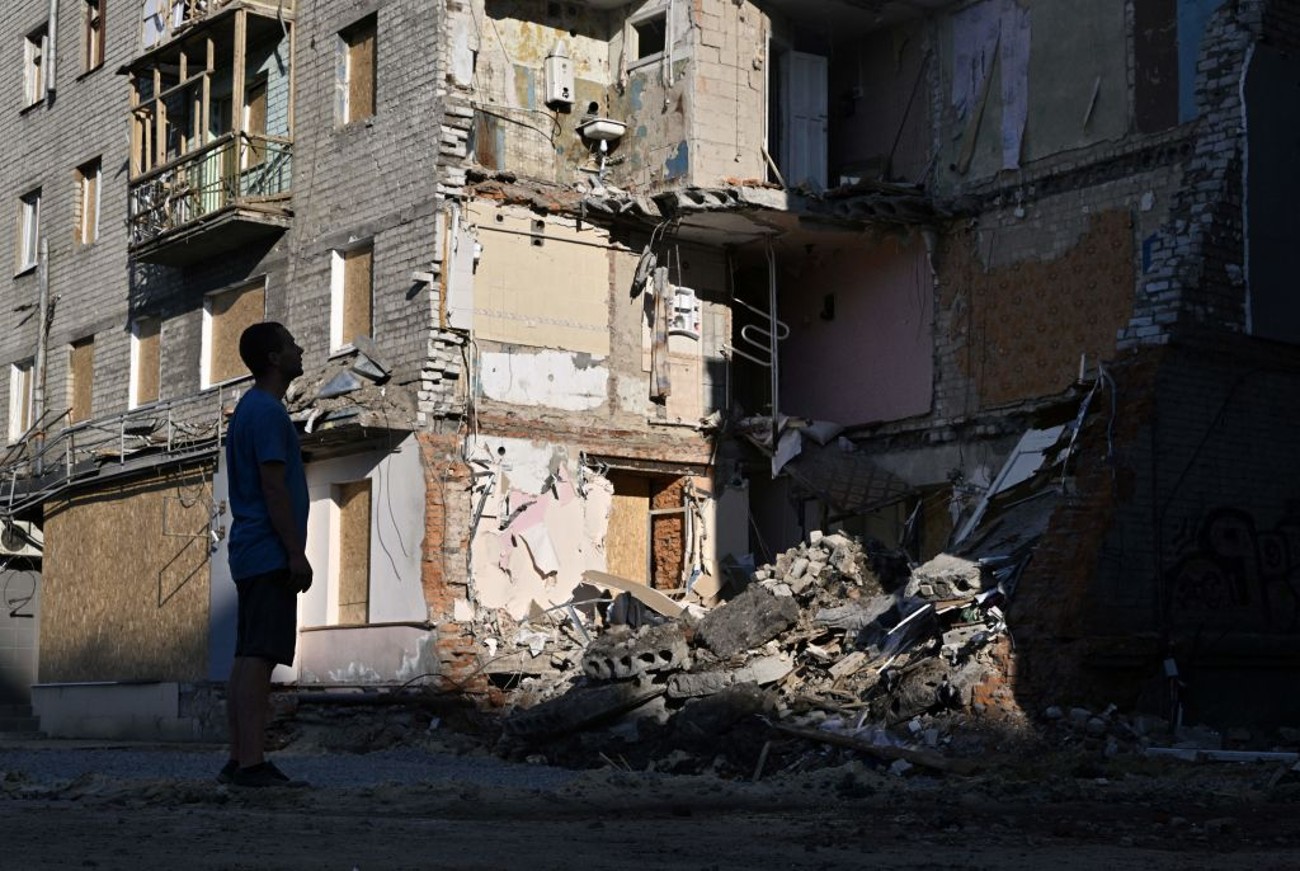 Russia says there is “no agreement” on prisoner release

(CNN Spanish) — Russia achieved “partial success” in recent hours in its attempt to control the Donetsk region in eastern Ukraine, where it has been bombing for weeks.

In addition, officials from the Joe Biden administration claimed that more than 75,000 Russian soldiers were killed or wounded during the war in Ukraine.

See the main news of the Russian war in Ukraine this Thursday, July 28.

“Partial success” of Russian forces in Donetsk, according to the Ukrainian military

Russian forces continue to advance in the eastern Donetsk region, where they have been shelling areas south of the city of Bakhmut for several weeks, according to the Ukrainian military.

In an operational update on Thursday, the Ukrainian Army General Staff said Russian forces were trying to advance towards Bakhmut from the south and east.

Russian forces were “partially successful” in the Vidrodzhennia-Vershyna direction and dug in southeast of the Vershyna settlement, the update said.

Vershyna is about 10 kilometers (6 miles) southeast of Bakhmut. Earlier this week, the Russians seized the nearby village of Novoluhankse and an adjacent power plant.

Russian advances were blocked. However, the General Staff said that attacks from four different directions towards Bakhmut were repulsed.

He said the Russians continue to use a wide variety of weapons, including tank fire, air strikes and artillery, across the front lines in Donetsk.

The Russians attacked several settlements north of Sloviansk to break through Ukrainian defenses and advance, although two of those attempted advances on Wednesday were repelled, the General Staff said.

The General Staff also said it is using drones to establish the positions of Ukrainian troops as Russian artillery continues to fire on settlements around the northeastern city of Kharkiv.

battlefield panorama: The General Staff assessed that Russia was focusing its main efforts on “establishing full control over the Luhansk and Donetsk Territories”, and holding the captured southern Kherson region and parts of Kharkiv, Zaporizhia and Mykolayiv.

Russia was blocking Ukraine’s maritime communications in the Black Sea, he added.

More than 75,000 Russians were killed or wounded, according to US lawmakers

More than 75,000 Russian soldiers were killed or wounded during the war in Ukraine, Biden administration officials told US lawmakers during a classified briefing on Wednesday.

“We were told that over 75,000 Russians were killed or wounded, which is huge, you have incredible amounts of investment in their ground forces, over 80% of their ground forces are bogged down, and they are tired,” the representative told CNN. Elissa Slotkin of Michigan, a Democrat who sits on the House Armed Services Committee and recently visited Ukraine. “But they are still the Russian military.”

It is difficult to independently gauge casualty figures in the war. Both Russian and Ukrainian officials, seeking to gain the upper hand in propaganda efforts, have at times exaggerated military gains and downplayed setbacks. The Kremlin does not regularly provide updated information on casualties.

The US analyzes a prisoner exchange with Russia 1:22

Last week, Richard Moore, the head of MI6, told the Aspen Security Forum that he thinks the Russians will start to lose steam in the coming weeks because they are running out of personnel.

And the next few weeks of the war will be crucial, American and Western officials have said, because the Ukrainians will try to mount a major counteroffensive in the south before winter. Ukraine is looking for additional reinforcements, lawmakers were told at Wednesday’s briefing.

Ukraine will try to recapture the southern city of Kherson, occupied by Russia since March, US and Western officials believe.

“The main conversation at the briefing was, you know, what more can and should we do for the Ukrainians, literally in the next three to six weeks, very urgently. The Ukrainians want to go south and do operations in the south. And we want them to be as successful as possible,” Slotkin said.

“I think what we have heard very strongly from President Zelensky and what has been reinforced today is that the Ukrainians really want to punch Russia in the teeth a few times before winter comes, to put them in the best possible position, especially to hit them in the south,” he said.

During the briefing, Slotkin said there was bipartisan support for sending Ukraine long-range missiles, known as ATACMS, which can strike up to 290 kilometers away.

The Ukrainians have been urging the US to provide them with these systems for months, since the HIMARS they possess can only strike at ranges of about 30 miles.

But National Security Adviser Jake Sullivan said last week at the Aspen Security Forum that the United States would not provide the ATACMS, because they could be used to strike deep into Russian territory, further escalating the war.

Explosions were heard near the Ukrainian capital Kyiv

Explosions were recorded in the early hours of this Thursday in the region of the Ukrainian capital, Kyiv.

“The enemy launched a missile attack on a community in Vyshhorod district this morning. An infrastructure target was hit,” Oleksiy Kuleba, head of the Kyiv regional state administration, said on Telegram.

Emergency services are already at the scene, Kuleba said, adding that information about the victims is not yet known.

The Kyiv state administration urged residents to seek shelter as the air-raid alarm remains in effect.

a bit of context: Russia initially attacked and occupied several suburbs of Kyiv after the start of its invasion in February, before the Kremlin withdrew its forces in April from around the capital to concentrate on the east of the country. Since the withdrawal there have been sporadic Russian attacks on Kyiv, including a series of deadly missile strikes last month.

Biden administration officials are frustrated that Moscow has yet to respond in a meaningful way to their “substantial proposal” to try to free two detained Americans, a deal that includes a trade for convicted Russian arms dealer Viktor Bout, as reported. exclusively on CNN this Wednesday.

See also  Report from Lviv, where tension is rising: "We can no longer say that western Ukraine is safe"

That proposal was presented to Russia weeks ago, Secretary of State Antony Blinken said when announcing it publicly on Wednesday. Administration officials told CNN they believed Moscow would accept the offer, but it’s almost August now and they haven’t received a substantive response, according to the officials.

This Thursday, the Kremlin spokesman, Dmitri Peskov, confirmed that “so far there is no agreement on this matter.”

Frustration over Russia’s lack of substantive response to the deal was an underlying factor in the administration’s decision to make public that a US deal is on the table.

“We communicated a substantial offer that we believe could be successful based on a history of talks with the Russians,” a senior administration official told CNN on Wednesday.

However, it was recognized in the administration that negotiations to try to free detained Americans are often difficult.

“We start all negotiations to bring Americans held hostage or wrongfully detained home with a bad actor on the other side. We start all of them with someone who has taken an American human being and treated them as bargaining chips,” said the senior official.

“So, in a way, it’s not surprising, even if it’s discouraging, when those same actors don’t necessarily respond directly to our offers, they don’t engage constructively in the negotiations,” they said.

Following reports of a US prisoner swap offer to release convicted Russian arms dealer Viktor Bout for US citizens Brittney Griner and Paul Whelan, the Kremlin responded that “so far there is no agreement on this matter.” , according to a spokesman.

“Well, look, since now there is no agreement that is going to be finalized, then, consequently, I have nothing more to add to what has been said,” Peskov said when asked by journalists during his daily conference call. this Thursday.

US Secretary of State Antony Blinken said Wednesday that he expected a call with his Russian counterpart this week to discuss a “substantial proposal” submitted to Moscow “weeks ago” to try to secure the release of the two Americans. , who according to the US are unjustly detained.