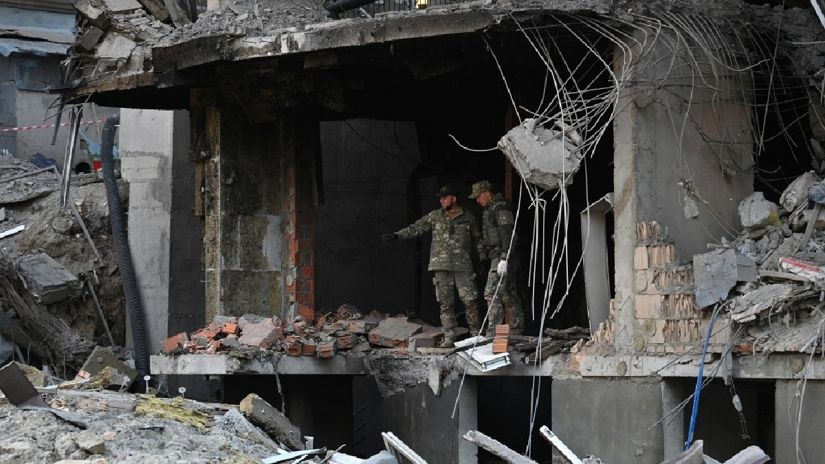 Russia confirmed this Friday to have attacked the day before Kievthe Ukrainian capital, with “high precision” weapons in full visit of the Secretary General of the ONUAntonio Guterres.

In this attack, the producer and journalist of the station financed by the United States Radio Free Europe/Radio Liberty died, after her home was hit by a missile.

The Defense Ministry of Russia reported that it launched a “high-precision long-range” airstrike on the workshops of the Artyom missile manufacturing and space company in kyiv.

The first bombing in the capital since mid-April came after Guterres visited Bucha and other cities on the outskirts of Kiev.

“It’s a war zone, but it’s shocking that this happened close to where we were,” said Saviano Abreu, a UN spokesman accompanying Guterres.

Ukrainian President Volodimir Zelensky denounced the attack as an attempt to “humiliate the UN and everything this organization represents.”

Germansa criticized the attack as “inhumane” and said it shows that the Russian president Vladimir Putin “He has no respect for international law.”

AFP journalists saw a building on fire, in a residential area of ​​kyiv, with a thick plume of black smoke escaping through broken windows.

“I heard the sound of two rockets and two explosions. It was a sound similar to that of a plane in flight and then two explosions with an interval of three or four seconds,” Oleksandr Stroganov, 34, told AFP.

The general secretary of the ONU he condemned the attack as “evil” and after visiting Bucha he asked Moscow to “cooperate” with the International Criminal Court in order to “establish responsibility” for the alleged crimes committed against civilians in this town.

He also pointed out that there is an ongoing investigation against ten Russian soldiers suspected of committing atrocities in Bucha, where dozens of bodies dressed as civilians were found after the withdrawal of troops from Moscow.

The facts investigated, according to Venediktova, include “murders of civilians, bombing of civilian infrastructure, torture”, as well as “sexual crimes” reported “in the occupied territory of Ukraine”.

hours before the bombing KievUS President Joe Biden asked Congress for $33 billion in additional aid to support Ukraine against Russian “atrocities and aggressions”.

“The cost of this fight is not cheap. But giving in to aggression is going to be more costly if we allow it to happen,” the US president defended.

In addition, Biden rejected claims by Russian officials that Moscow is fighting the entire West.

“We are not attacking Russia. We are helping Ukraine defend itself against Russian aggression,” Biden said.

A senior US official, who spoke on condition of anonymity, said the package Biden is seeking to broker is aimed at supporting the Ukrainian government and military through early October.

After weeks of conflict without the Russian troops being able to capture the Ukrainian capital, Moscow’s efforts are now focused on achieving a significant advance in the east and establishing its control in the southern area, around the port of Mariupol.

The Ukrainian authorities indicated that they have planned for this Friday a plan to evacuate the civilians trapped in the Azovstal plant besieged by the Russian forces in Mariupol.

Hundreds of Ukrainian soldiers and civilians, including dozens of children, are sheltered at this plant.

From there, the Ukrainian Azov battalion indicated on Telegram that a military field hospital located in the industrial complex was bombed.

The operating room collapsed and the soldiers being treated were killed or wounded, he added, without giving a balance.

Meanwhile, kyiv has admitted that Russian forces have captured several towns in the Donbas region in the east.

The first phase of the invasion launched by Russia on February 24, it failed to capture kyiv or to overthrow the Ukrainian government, after facing fierce resistance, which was reinforced by weapons sent to Ukraine by Western countries.

Now the Russian campaign is focused on capturing territories in the east and south of Ukraine and also using long-range missiles against areas in the west and center of the country.

So far, the conflict has forced 5.4 million Ukrainians to leave their country and more than 7.7 million people have fled their homes without crossing the border, according to a UN estimate, at a time when the Organization International Migration launched a request for aid for 514 million dollars.

“We only have one hope left: to be able to return home,” said Galina Bodnya, a retiree in the southern city of Zaporizhia.