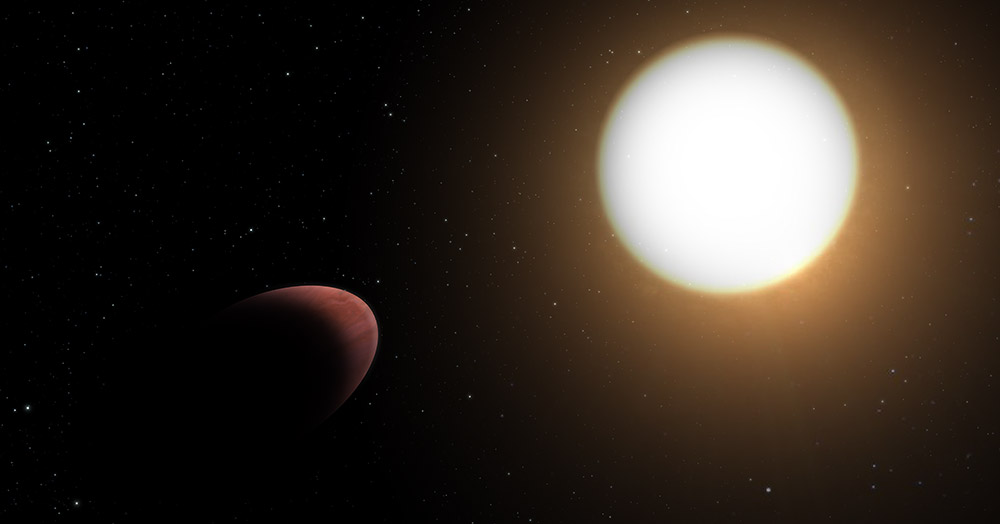 Elliptical instead of round: astronomers have observed a clearly deformed exoplanet for the first time – WASP-103b resembles a rugby ball instead of a sphere. The cause of this deformation is the strong tidal forces of its parent star. Because the planet orbits it very closely, stellar gravity pulls it apart. However, it is puzzling why this exoplanet seems to be drifting away from its star instead of being increasingly attracted by it.

Tidal forces always arise when the gravity of one celestial body acts on another. In this way, ebb and flow arise on earth due to the gravitational pull of the moon. However, the effects are far stronger when they are caused by stars or gas giants like Jupiter. The enormous tidal forces of Jupiter walk through the interior of its nearby moons and generate heat, which in Io is expressed in violent volcanism and in Europe gave rise to the subglacial ocean and possibly submarine volcanoes.

The effects would have to be even more extreme with hot Jupiters – extrasolar gas giants that orbit their stars very closely. Astronomers have long suspected that such exoplanets would have to be elliptically deformed by the tidal forces of their star. So far, however, it has never been possible to demonstrate this effect.

That has now changed: for the first time, astronomers have directly observed an exoplanet that has been significantly deformed by the tidal forces of its star. The planet WASP-103b is a hot Jupiter in the constellation Hercules, whose mother star is around 1.7 times larger and slightly hotter than our sun. Like other hot Jupiter, the exoplanet orbits its star in a very narrow orbit and only takes one day to complete one orbit.

To find out what consequences this has for the planet, astronomers working with Susana Barros from the University of Porto have targeted WASP-103b with the CHEOPS space telescope. This telescope is designed to record the transit of exoplanets in front of their star with high resolution. Using the resulting light curve, not only can the size and orbit of the planet be determined, it should also reveal whether the planet is round or deformed.

At WASP-103b, the researchers analyzed the CHEOPS light curves from twelve transits and also evaluated data from the Hubble and Spitzer space telescopes.

Rugby ball instead of ball

In fact, the data revealed: the exoplanet WASP-103b is deformed. As a result of the strong tidal forces, it looks more like an elliptical rugby ball than a sphere. “It is unbelievable that CHEOPS was able to prove this deformation,” says co-author Jacques Laskar from the observatory of the Sorbonne University in Paris. This is because such a deformation is only noticeable in the light curve in the form of tiny deviations.

This is the first time that astronomers have directly demonstrated that an exoplanet has been deformed by the tidal force of its star. From the extent of the deformation of WAPS-103b, its size and the estimated mass, the astronomers were also able to obtain information about its internal structure. “A material’s resistance to deformation depends on its composition,” explains co-author Babatunde Akinsanmi from the University of Geneva. “By measuring how much the planet is deformed, we can therefore determine how much of it consists of rock, gas or water.”

These data revealed that, while WASP-103b must be constructed similarly to Jupiter, it is severely distended. What exactly caused this bloating is still unclear.

The influence of stellar gravity on the orbit of WASP-103b is also unclear. According to the theory, the strong attraction of the star should also influence the orbit of such a close planet – it should spiral more and more narrow. At some point the planet will come so close to its star that it will be torn apart and devoured by its gravity.

In the case of WASP-103b, however, the team of astronomers could not find any clear indications of such a narrowing of the orbit – on the contrary. “There is slight evidence that the orbital period is lengthening, which is contrary to expectations,” explain Barros and her colleagues. However, whether the exoplanet is actually drifting away from its star or whether the data is due to statistical artifacts and other measurement-related distortions remains to be clarified. (Astronomy & Astrophysics, 2022; doi: 10.1051 / 0004-6361 / 202142196)