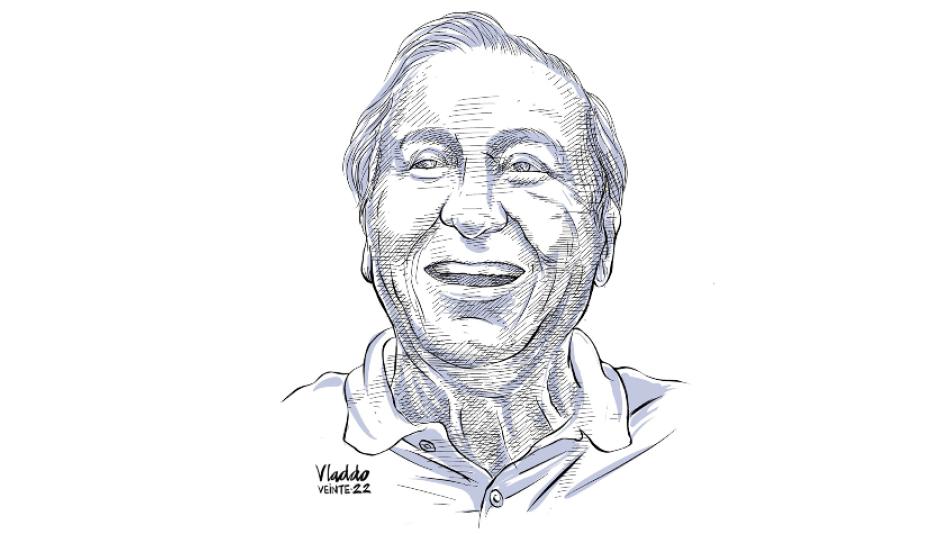 Rodolfo Hernández: the great leap of the ‘outsider’ who reached the ballot – Presidency – 2022 Elections

presidential candidate Rodolfo Hernandez turned out to be one of the big surprises in this presidential campaign. Without participating in any inter-party consultation and presenting himself as an independent candidate endorsed by the League movement, which translates as League of Anticorruption Governors, he managed to catapult his candidacy to the second presidential round with just over 5,900,000 votes.

(You can read: Rodolfo Hernández: what comes in the case against him if he wins the Presidency)

All the polls marked the growth of Hernández in the first round, even above Sergio Fajardo and getting closer and closer to Federico Gutierrez. However, none put him above the Team for Colombia candidate. Now, if he reached the House of Nariño at 77 years old, he would become the oldest president after Manuel Antonio Sanclemente (85 years old). Until a few months ago, Hernández was an unknown figure in the country, except in Santander, where he grew his company, and especially in Bucaramanga, where he was elected mayor in 2015.

(Read: Trial against Rodolfo Hernández will be after the second round)

The son of Luis Jesús Hernández Rojas and Cecilia Suárez, he began his primary studies in Piedecuesta, Santander, at the Escuela Anexa a la Normal Superior for boys. Later he traveled to Bucaramanga, where he completed his high school studies at the Colegio de Santander. His mother was the one who would later encourage him to study civil engineering at the National university of Colombia in Bogotá, from where he later graduated in 1970. He returned to his homeland and there he obtained a position in the soil laboratory of the Secretary of Public Works of the Government of that department.

He is married to Socorro Oliveros and is the father of four children: Mauricio, Luis Carlos, Rodolfo José and Juliana, who in 2004 was a victim of violence: she was kidnapped and was never heard from again.

Rodolfo Hernández, candidate for the Presidency.

He has three brothers: Humberto, Alfonso and Gabriel, the last two also civil engineers. Gabriel, the younger brother, has played a key role as ideologue in Rodolfo’s political career. Gabriel studied philosophy, gave Rodolfo classes on Kant and during the campaign for Mayor of Bucaramanga, he focused it on the objective of arousing emotions in the electorate. And, apparently, this seal also served Hernández for his presidential campaign.

On July 29, 1971, after carrying out his first popular housing construction works in Piedecuesta, together with Zapatoca merchants Guillermo Gómez Serrano and Abelardo Serrano Otero, he founded the company Constructora HG (Hernández Gómez & Cía. Ltda.), with projects in Piedecuesta, Floridablanca and Bucaramanga. Later, he bought all the shares of the company together with his wife, Socorro Oliveros, and their children, continuing with a greater push in the construction of social housing in Bucaramanga, Floridablanca, Piedecuesta, Socorro, Barbosa, Girón, Barranquilla and Bogotá. .

Regarding his fortune of 100 million dollars, Hernández explained that his investments are divided as follows: “70 percent in land, and 30 percent rotating it in the financing of the products we sell.” For him, the best business is to accumulate land. One of the reasons for the piedecuestan is that no one asks if a lot is old or new, as happens in the real estate business, he said in Bocas.

From his businesses as a businessman, the Hernández family became recognized in Piedecuesta, so much so that the Liberal Party later asked Hernández to run for the Council at the end of the 1970s. In the 1990s he repeated his position there; however, he did not attend the debates and left a substitute in charge of him.

I was in New York

In 2015, he financed his own campaign for mayor of Bucaramanga and led the Logic, Ethics and Aesthetics movement, the government motto suggested by his brother Gabriel.

His victory was a surprise for Bucaramanga and even for Hernández himself, who received the news in New York on the day of the voting. In November 2018, the Attorney General’s Office opened an investigation and suspended Hernández from his position for three months, after slapping Jhon Jairo Claro, a city councilman. The second suspension was in 2019, for improper participation in politics, by expressing his support for a candidate from the municipality of Malaga, Santander. He then resigned his position as mayor.

(We recommend: ‘We will vote for Rodolfo and Marelen on June 29’: Federico Gutiérrez)

The ‘engineer’, as he is called, has also been the protagonist of multiple scandals. In October 2018, Hernández said some strong words against Fernando Martínez, a veedor who was denouncing the felling of a tree. In the midst of the scuffle, Hernández said: “I am the environmental authority. I know that you are a lavacu… of politicking. He is a lavaper… of the politicking and of the thieves who robbed Bucaramanga”.

Hernández made controversial statements about Venezuelan women: “They don’t pay for anything, we cover everything, and the births they have had are like 400 a year, they are a factory to make poor Chinese,” he commented at the beginning of 2019. He also said that he admired Adolf Hitler, the leader of the National Socialist Party of Germany, who was dictator of that country during World War II. “I am a follower of a great German thinker called Adolfo Hitler”, he said in 2016.

However, he later retracted his statement and explained: “I have nothing but against the Jewish people, against the people, against Einstein, who have contributed to science, technology, work, knowledge. I had Jewish teachers and anyone can have a slip. I apologize to the Jewish people, to the people I could hurt with that, a totally stupid comparison. It shouldn’t have happened, but I’m human, I have the right to make mistakes like anyone else,” he said.

Joy among supporters of Rodolfo Hernández in Cali

Currently, Hernández is in a judicial process for alleged responsibility in the crime of improper interest in the conclusion of contracts in what is known as the Vitalogic case.

The exmandatario is investigated for alleged irregularities in a consulting contract that would determine the person in charge of the technification of garbage in Bucaramanga. According to the investigation of the Prosecutor’s Office, Hernández Suárez would have intervened so that the consulting contract that would determine the technification of the garbage was awarded to the contractor Jorge Hernán Alarcón, who was actually in charge of this. For this fact, the Prosecutor’s Office charged him with the improper conclusion of contracts.

This fact has become one of the main focuses of criticism of his campaign, because while the candidate is on trial for alleged acts of corruption, his speech has always focused on raising the anti-corruption flag and attacking the rulers and politicians. corrupt that have governed Colombia.

In recent statements, the candidate said: “I have not stolen a peso, I have a clean soul” and attributed the events to political persecution for his fight against corruption. He indicated that what he did was make decisions to face an environmental emergency in the capital of Santander and through an international call a contractor was sought through bidding.

He also indicated that he is a “victim of politicians” who want to harm him. And he added that they filed several complaints against him and they have already closed 162 for not finding irregularities.

Although a few months ago the engineer’s campaign had had little visibility, since not participating in the inter-party consultations distanced him from the public debate and the exposure of the mediain recent weeks Hernández began to go out into the streets and specifically beyond Bucaramanga, from where he had maneuvered.
The engineer was in Medellín, Cali, Cartagena, Barranquilla, Bogotá, Neiva; San Vicente del Caguán, in Caquetá; Acacias, in Meta, or Guamo, in Tolima.

(You may also be interested in: Live election results: Petro and Hernández go to the second round)

There he has met his group of volunteers called Juventudes Rodolfistas, together with whom he has inaugurated his campaign headquarters, the Casas Rodolfistas, and who receive the candidate in each city and make caravans. These youth groups are organized mainly through social networks and WhatsApp. And his publications on TikTok are famous.

Rodolfo Hernández, candidate for the Presidency.

“He embodies the figure of the outsider, the non-political politician who reaches politics. More than because he has a career (as an entrepreneur), he perceives that Colombia needs his way of working to improve. So, this condition of ‘I came here because I saw everything so badly that I feel I should do something’ generates few precautions in Colombians”, says Alicia Peñaranda, political communication analyst. “He manages the techniques of political propaganda, which we have known since World War II. So it is a language that means, it is a repetitive discourse, which creates a public problem, which in this case is corruption. It complies with the characteristics of good advertising and occupies a space that no one else occupies, reaching the undecided, the indifferent,” says analyst Peñaranda.

Political analyst and strategist Guillermo Henao explains that engineer Hernández began to configure an electoral reality in Colombia as it was 5 years ago Donald Trump in United States.

(Related articles: Murder of a jury in Meta overshadowed a day marked by tranquility)

“Explaining this from political science is not easy, even more so understanding that this type of character breaks the common archetypes of ‘should be’ and replicates buffoonish logic where the impression and impact of persuasion via political communication and its technique, marketing political, they are more important than the visions of development, the proposals or simply the debate”, says the analyst.

One of the strengths of the former mayor of Bucaramanga, according to the analyst, is his casual and colloquial language, which allows a strong connection with the electorate.

“He has had a series of performances that touch the citizen and bring him closer to voters tired of the same model and the same actors. At the same time, his words loaded with colloquial expressions, simple communication, constant repetition and sometimes even disjointed, have managed to weave a stronger emotional thread than other candidates, “says Henao.

The truth is that now Gustavo Petro will have to dispute the House of Nariño on June 19 with a non-political politician who now also has the possibility of expanding his electorate towards the center and the right “Surely he will not respond publicly directly, but in informal terms these alliances can be created in their favor”, says Felipe Nieto, a political analyst at the University of Antioquia. In addition to the support that could come in the coming weeks.