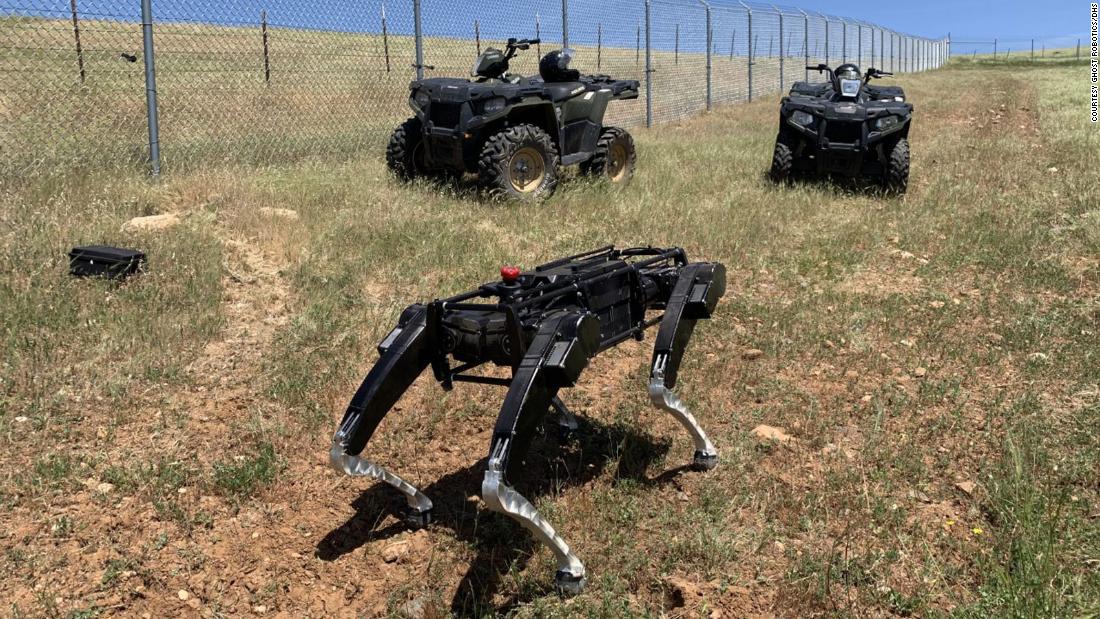 Immigrants: “We die together or we are saved together” 2:04

(CNN) — The photos look like something out of a scene from science fiction: robot dogs patrolling the US-Mexico border, scaling difficult terrain in search of threats and contraband.

But these images are real.

The Department of Homeland Security introduced them to the public recently as it revealed details about how it is testing the technology.

Officials hailed the robots’ potential as a “force multiplier” that could increase the safety of Border Patrol agents by reducing their exposure to life-threatening dangers. An article touting the tests on the DHS Science and Technology Directorate website notes that one day the dogs, officially known as Automated Ground Surveillance Vehicles, could become “a CBP agent or officer’s best friend.” [Oficina Aduanas y Protección Fronteriza de Estados Unidos]”.

“Don’t be surprised,” he says, “if in the future you see the ‘Fido’ robot out in the field, walking alongside CBP personnel.”

But details about the tests seemed to surprise some people, prompting a flurry of reactions on social media comparing the images to dystopian scenes from sci-fi shows like “Black Mirror.”

“This really felt like a slap in the face,” says Vicki Gaubeca, director of the Southern Border Communities Coalition, an umbrella group that criticizes the initiative as an “alarming and outrageous” waste of taxpayer money that would be better spend on developing systems to hold Border Patrol agents accountable.

Gaubeca describes herself as a lover of technology and dogs (she has five). But she says she doesn’t see anything cute in recent government descriptions of robot dogs lending a “helping paw.” For years, her organization has warned that militarization along the border puts communities and migrants at risk. And this, she says, is just the latest troubling example.

“There are other technologies that they’re already using that we think they should scale back, and yet they’re adding another kind of surveillance technology that’s scary, to be honest,” says Gaubeca. “It certainly feels like it’s something built for something very aggressive, like theaters of war, rather than a community.”

Ghost Robotics, the Philadelphia-based company that makes the robots DHS teams have been testing, says there is nothing to fear.

“We are focused on doing the right thing. We want to do what is right for national security and for the country,” says company CEO Jiren Parikh.

See also  In the Mittelland - a storm front brought a lot of rain, hail and lightning - news

A spokesman for the Department of Homeland Security says the project remains in the research and development phase, with no timeline for the deployment of the dogs.

Meanwhile, there are many serious problems that this technology is bringing to light.

There is a difference between science fiction and reality

They have been symbols of futuristic innovation and ominous harbingers of what might happen if technology falls into the wrong hands.

In 1940, Westinghouse exhibited a 60-pound aluminum-skinned dog at the World’s Fair named Sparko that could walk, bark and sit. In the 1960s, the Jetsons’ futuristic cartoon family briefly adopted a nuclear-powered electronic dog, Lectronimo, before deciding to donate it to the police department.

But Parikh, CEO of Ghost Robotics, says there’s a big gap between the way robot dogs are portrayed in science fiction and the reality of technology.

“It’s a battery-powered computer that moves on four legs and literally stops working in four hours. There’s no way they’re going to take anything,” he says.

And, he notes, “it’s a remotely controlled robot with a human in the middle.”

But still, Parikh says his company’s robots provide a number of advantages in border areas. DHS is patrolling a large geographic area, he points out, often under harsh conditions.

“This is a good way for technology to add value,” he says, “by filling in the gaps.”

During tests of the 100-pound robots, different types of cameras and sensors were mounted on them, which transmit data in real time to humans who operate them via a laptop or handheld remote, the DHS said.

Teams first tested them on asphalt, grass, and hills in Lorton, Virginia, then tested them in more realistic settings in El Paso, Texas, where they walked over hills, ravines, and rocks. The El Paso tests simulated sentinel tasks and inspections. And the exercises also included maneuvers in confined spaces, high-heat, low-oxygen conditions, “situations that are especially dangerous for CBP agents and officers,” the DHS said.

DHS Science and Technology Program Manager Brenda Long describes the dogs as “perfect” given CBP’s broad mission and the many risks its personnel face.

“The southern border can be an inhospitable place for man and beast, and that is exactly why a machine can excel there,” he said in the department news release.

Activists at the border say they already felt besieged

Advocates for the border community have long accused the US government of militarizing the region and using excessive surveillance. And the announcement of robot dog trials doesn’t help, says Gaubeca.

“Border communities already feel over-policed, over-militarized, and yet they’re bringing out this new technology and bragging about it at a time when families are concerned about putting food on their tables and inflation,” he says. “And it completely ignores the border communities as a community. It’s like they don’t recognize that we are human beings on both sides.”

For Gaubeca, it all comes down to how resources are allocated.

“It’s a use of technology that creates more problems and doesn’t solve what we see as the problem, which is how do we hold this agency accountable and how do we create a more humane and efficient system at the border,” she says. “They should spend the money on something that is more humane and effective, rather than intimidating.”

The Biden administration has said it wants to create a more efficient, humane and orderly system at the border, but “this completely contradicts that sentiment,” he says.

Ghost Robotics has partnered with the US Department of Defense in the past. And Parikh noted that he had just been on the phone with the Ukrainian Defense Ministry before speaking to CNN this week. But he said the robot dogs at the US border are not part of a military effort, and any suggestion that they are is nonsense.

This image released by the US Air Force in 2020 shows US Air Force Staff Sgt. Carmen Pontello introducing Hammer, a working dog, to the Ghost Robotics Vision 60 at the base of the Scott Air Force in Illinois.

“It’s just another sensor carrier. It’s really remote… It’s really for sensing the environment. It doesn’t really interact with people. It’s not what it’s made for. It has no weapons,” he says. “It is not being militarized by the border. It’s not stopping people, saying ‘don’t go here’. Can not do that. It’s a little robot.”

The technology, he says, is designed to keep people safe. But could it ever be used against migrants at the border?

“That has never even come up,” says Parikh. “It’s not even a remote use case that was ever discussed or talked about.”

People can’t even agree on “a basic physical wall made of concrete and metal,” he says.

“Do we really think we’re going to start arming robots? It’s silly to do that. I don’t think it’s in America’s DNA either,” says Parikh. “We live in a country that has so many rules and regulatory requirements that things like this are remote and virtually impossible without input from the population.”

“This is not done in a vacuum… It has to go through processes and rules. Everything we do, everything is questioned. Everyone has the ability to question what we’re doing.”

This is not just about the border

When Greg Nojeim found out about the robot dogs, his mind filled with questions. The main one: Has anyone studied its impact on privacy?

“The border has become a testing ground for new and intrusive surveillance technology,” says Nojeim, co-director of the security and surveillance project at the Center for Democracy and Technology.

And in many cases, he says, the law has not caught up with developing technology.

A robot dog scans a desert landscape with its camera and sensor while on guard duty in this photo provided by the Department of Homeland Security.

He says that when that happens, civil liberties suffer. And that, he says, should matter to everyone, whether he lives near the border or not.

As a recent Los Angeles Times op-ed pointed out, surveillance technologies that start at the border often trickle down to other parts of the country.

“That technology has now spread to some police departments, and people are finding that it doesn’t identify people as well as it could, and that people of color are being misidentified at an alarming rate,” he says.

If robot dogs start patrolling the border, Nojeim says, it’s only a matter of time before they can show up in your community, too.