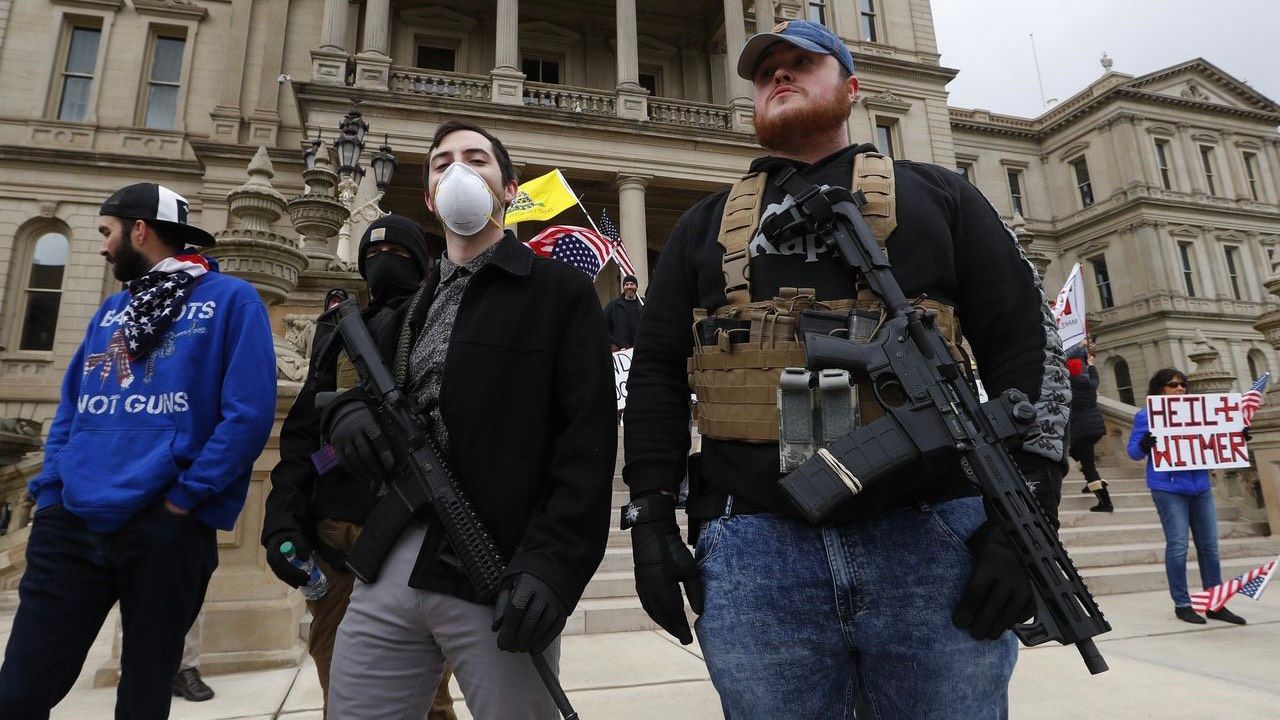 About a week ago, Jocelyn Benson, the highest electoral officer in Michigan as Secretary of State, banned the open carrying of firearms in front of polling stations. The democrat, whose duties resemble those of an interior minister, wanted to prevent right-wing extremist militias from intimidating voters or even storming the seat of parliament and government. But numerous professional associations of the police and sheriffs announced that their members would not enforce the ban.

Two weeks ago, thirteen people were arrested in Michigan for planning to occupy the seat of government in Michigan’s capital, Lansing, and kidnap and execute the Democratic governor of the state, Gretchen Whitmer.

On Thursday, three far-right organizations – the Michigan Gun Owners, the Coalition for Responsible Gun Owners and the Michigan Open Carry, Inc. – filed lawsuits against the ban in support of police resistance against the state’s elected government. Dean Greenblatt, who represents the latter organization as an attorney, filed the lawsuit in Michigan Administrative Court.

Specifically, Greenblatt is suing Attorney General Dana Nessel, Secretary of State Benson and the head of Michigan State Police, Joe Gasper. When the police associations announced that they would not enforce the ban, Nessel announced that the Michigan State Police would be deployed. These police forces are not counties or municipalities, but report directly to the state government.

Nessel also warned that the plot against Whitmer was still an acute threat and that the revelations in court so far were only the “tip of the iceberg”.

The controversy over whether guns can be openly carried in front of polling stations in Michigan raises a crucial question: Who is in power in this state – the police or the government? What is going on in Michigan appears to be followed closely at the national level. US President Trump urged his voters to vote and “look very carefully”. This amounts to an open threat of violence against voters and is an important part of Trump’s strategy to stay in power regardless of the outcome of the November 3rd election.

On his Facebook page, Greenblatt claims the ban would “incapacitate voters who exercise their basic right to self-defense”. It continues: “Secretary of State [Jocelyn Benson] demands that voters either give up their right to self-defense, guaranteed by the second amendment to the constitution, or their right to vote. ”In truth, the lawsuit aims to give the fascist militias free rein to act in front of the polling stations. The police associations use the same arguments to justify their refusal to enforce the ban.

Opponents of the ban within the police force include Michigan Sheriffs Association director and executive Matt Saxton, and Livingston County Sheriff Mike Murphy. Saxton said, “The ban created a solution where there was no problem.” Murphy said, “You choose where you live. I don’t know what external influences could disturb you. ”Both flatly deny that the right-wing extremist militias pose a threat.

International online rally: Welcome to the relaunch of the World Socialist Web Site

The lawsuit brought by Michigan political activist Robert Davis also argues that the ban relates to a non-existent threat. Davis says the decision is fueling “a hysteria that just doesn’t exist … This Jocelyn Benson just wants more power. It is obvious that this is a classic example of the most egregious government overreaction that I have ever seen. “

The events of the last few weeks paint a different picture, however: During the first presidential debate, Trump called on the fascist Proud Boys to “take a step back and stand by”. A week before the debate, the President’s son, Donald Trump Jr., posted a video on Facebook calling on his father’s supporters to join the “Army to Secure Trump’s Re-election”. Shortly thereafter, it became known that militias that had participated in protests against the Corona measures and were funded by Republicans close to Trump wanted to kidnap and murder Governor Whitmer.

The Michigan Democrats have failed to inform the public that their voting rights are in jeopardy. Even the major media companies did not think it necessary to report that almost all police in the state refuse to implement the government’s instructions. Instead, the Democrats hope that pro-government sections of the Michigan State Police will fend off the plot. They know that if the truth of what happened would come out, resistance to the police would be fueled and the population would be mobilized. The Democrats are appealing to the police – that is, they are betting precisely on the forces whose associations are rebelling against them – and making them the arbiter of Democratic rights in Michigan.

The Michigan Civil Rights Agency recently voted for the police to guard the polling stations. The agency’s director, James E. White, who was deputy chief of police in Detroit prior to taking office, said: “The right to vote is the cornerstone of our democracy. We take it very seriously should this right be endangered, thereby violating federal or state civil rights laws. “

The presence of police officers in front of the polling stations would only aggravate the situation and negatively affect voter turnout in working-class neighborhoods, where police violence is particularly common. It is also possible that the police will assist the militia in intimidating voters. The reaction of the Democrats to the resistance of the police makes it clear that their behavior is playing into Trump’s hands in this important “battleground state”.