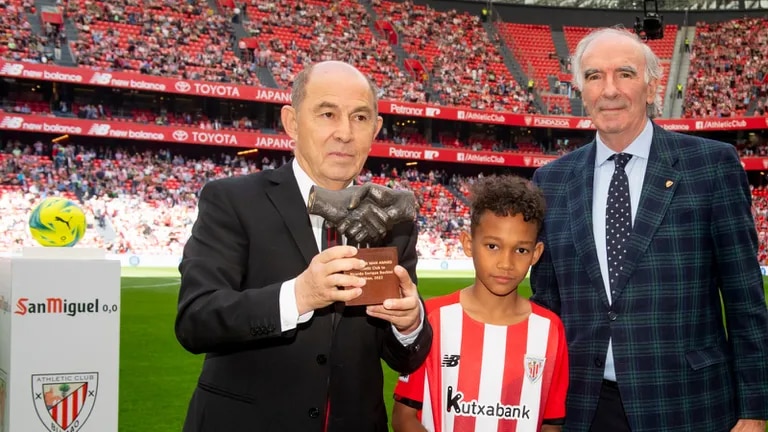 One Club Man. A select nucleus, different, special. In the style of those exclusive and closed areas of England in the 19th century, only virtual, football and global. A space that very few can access, only those who have spent their entire career wearing a single shirt and, in addition, they have done it at a superlative level. Until now, all the members of this club were European. From now on there is also a South American: Ricardo Enrique Bochini.

The Independiente’s top idol and indisputable icon of Argentine football joined a brotherhood in which, among others, are the Italian Paolo Maldini, the Welsh Ryan Giggs, the Catalan Carles Puyol or the german Seep Maier. The coronation took place at the Nuevo San Mamés, the stadium of Athletic Bilbao, the club that promoted the idea, minutes before the League match against Valencia, and it was the final point for a weekend rich in tributes, nostalgia and emotions .

“The players have to think that we play for the fans. They make a lot of sacrifices to go to the field when it rains torrentially, when it’s cold, when it’s hot. I always thought of those fans and that’s why I stayed with Independiente throughout my career.” It was one of the many phrases that Bocha left as it passed through the Biscayan capital.

The One Club Man Award (or Woman, when the winner is a woman), an award given to those chosen, was created by the Basque entity in 2015 to honor footballers who meet a series of values ​​that, on the other hand, , are what sustain an institution that has resisted fully entering into the absolute commercialization of this sport and, for example, continues to feed only on players with Basque origins, most of them emerging from the prolific and inexhaustible quarry of Lezama .

Loyalty to the colors and commitment to the culture of football, but also responsibility, sportsmanship and respect are the conditions that the new One Club “members” must meet. Jose Angel Iribar mythical goalkeeper of Athletic and the Spanish team, he is perhaps the one who best represents them and the greatest symbol of the “lions” of Bilbao. With a slight limp left by his 19-year career, he was the host who accompanied Bochini -who had also completed 19 years with the Red- to the center of the impeccable playing field at San Mamés to present him with the award to respectful applause and admired by a standing hobby.

See also  Sergio Busquets, the new captain of Barcelona, ​​is the first to publicly say goodbye to Messi

A few minutes before the screens of the stadium were in charge of showing images of the 10 of Independiente, several of his most important goals and those plays extracted from his magic hat. Surely, the youngest will have seen it in action for the first time. The most veterans, on the other hand, may even remember their only visit to the old Cathedral. It was in 1985, in a friendly that ended 0-0 and in which – paradoxes of life – Bochini suffered one of the very few expulsions of his career, due to a double yellow card.

There were no words during the tribute at the stadium, although there was a waterfall the day before, when An excited and grateful Bocha could be seen: “It is the first award that they give me outside my country, and I did not expect it because it has been many years since I stopped playing. For me it is a huge pride, one of the greatest satisfactions that football could give me “, said the man born 68 years ago in Zárate, although he also took care to clarify that “none like the fact that Independiente named their stadium after me.”

Since he arrived in Bilbao, Bochini received many entertainments during which he left interesting concepts about the differences that exist between football 40 or 50 years ago and today. “I see it as very difficult for a player today to spend his entire career at a single club. He can pass in Athletic for being the way he is, but I doubt that in many more places ”, granted as a nod to the Basque entity. And in that aspect, he highlighted the greater sense of belonging to a club that those who grew up in it have: “I came to Independiente when I was 15 years old. He slept, had lunch and dinner in the pension. I knew everyone and everyone knew me and treated me with affection long before I made my debut in the First Division and the fans began to know me. I don’t know how a player who changes clubs feels, I had many teammates who came from other places and gave everything for Independiente, but for me each title and each defeat always had a special flavor. For this reason, so many years after retiring, I am still there, helping in different functions”.

See also  Why can Santiago Giménez play for Chivas ?: He was not born in Mexico

Many Red fans came to Bilbao over the weekend to be close to their idol during the tribute. On Saturday they even turned the San Mamés press room at times into a small piece of the old Double Visera, songs and t-shirt fluff included.

A talk with the writer Eduardo Sacheri, who described Bochini as “the greatest of all legends”, and the journalist George Barraza, author of the biography of the Red idol, allowed to remember anecdotes, review history and remember days and nights of glory that seem so far from the Independiente model 2022. “The current situation of the club hurts me”, Bochini responded to a question. He did not want to delve much into the subject and in that context it seemed the most logical.

El Bocha lived a weekend that brought him back to his happiest times and showed him once again – in case it was necessary – that his enormous football legacy not only remains intact but is recognized even on the other side of the world. From now on he integrates nothing less than the One Club Man, an exclusive, select, special and reserved site for those who have been faithful to a shirt and a feeling from the first to the last day they played in the First Division. They are very few, just as big as that fragile-looking boy who embodies the essence of Argentine football of all time.