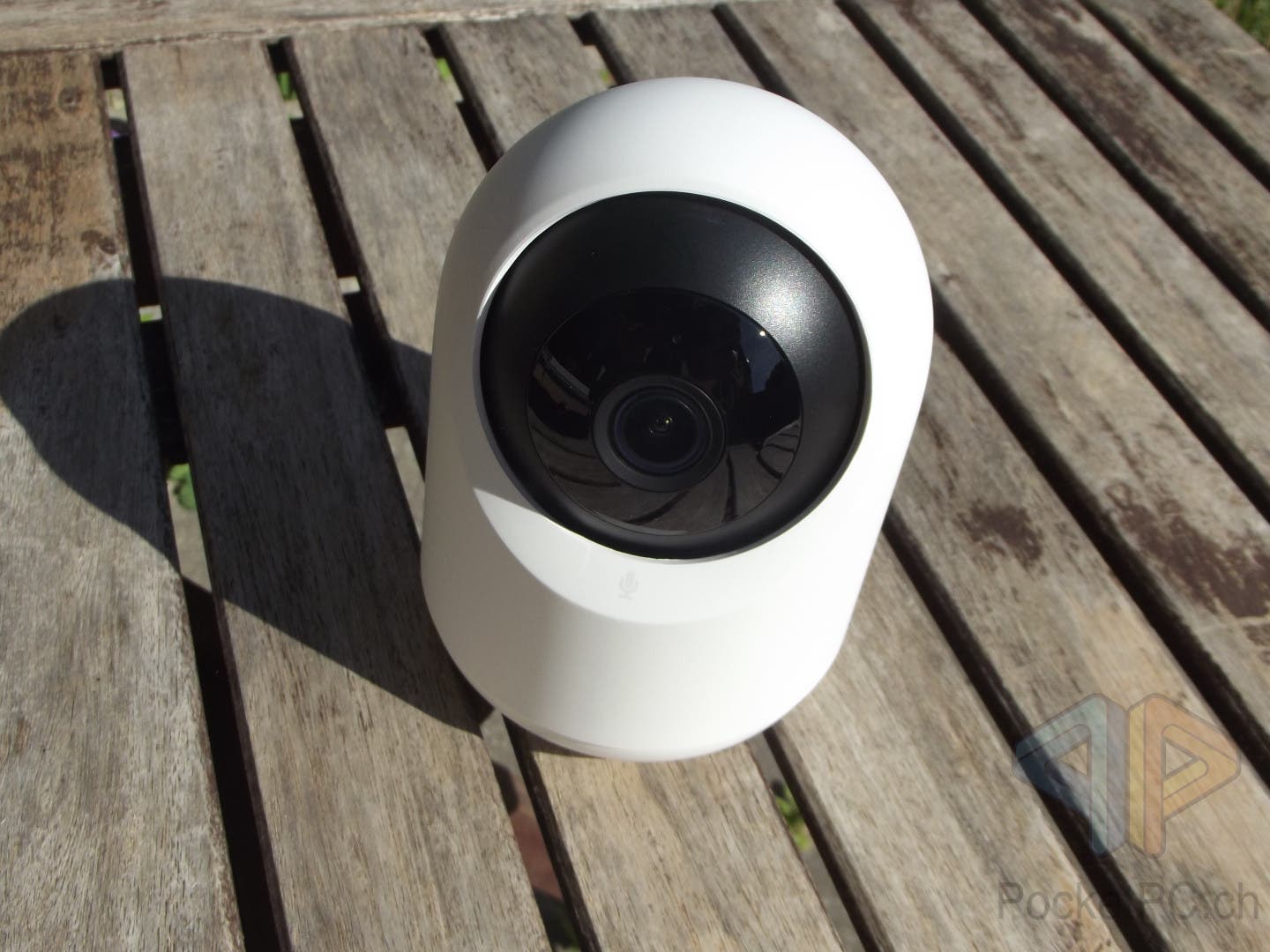 There are many network cameras. But we have now looked at the Smart Home Gadget producer SwitchBot. The SwitchBot Pan/Tilt Cam rotates and swivels. It also promises to fit into the SwitchBot universe and be equipped with object tracking and a privacy mode, among other things.

Included with the SwitchBot Pan/Tilt Cam

The camera comes with a mounting plate and two suitable screws with dowels, a drilling aid in the form of a sticker, a 2 m long microUSB cable and a 2A USB power adapter, a SIM card slot tool for the reset button, and quick start guide and a support flyer.

Everything included with the SwitchBot Pan/Tilt Cam. Image: PocketPC.ch / Jeanrenaud

The SwitchBot Pan/Tilt Cam is 78 x 78 x 107 mm and weighs 195 grams. It is white and cylindrical with a spherical tip. It has a black ball with the camera installed, which can be tilted 115 degrees vertically. The turret of the cylinder can be rotated 360 degrees horizontally. The indoor IP camera delivers images with 1080p FullHD (1920 x 1080 pixels image resolution) using H.264 Viceo codecs. The lens comes with a focal length of f/2.0 therefore. A status LED is mounted above the camera lens and lights up red or green. It can also be deactivated via the app.

Eight 850 nm infrared LEDs are installed around the lens for night vision. Underneath is the microSD card slot, which accepts memory cards up to 128 GB and thus enables local recording of images and videos. The microphone can be found below the camera ball.

Above this is a white stripe with the SwitchBot wordmark a quarter turn behind the camera optics, indicating privacy mode. In this state, neither sound nor picture is recorded.

A loudspeaker can be found in the middle of the back of the tower. The microUSB connection for the power supply and the pinhead-sized opening for the reset button are located in the base of the cylindrical camera body. The underside of the foot has four rubber feet and a recess into which the mounting plate can be snapped. This makes it easy to attach the SwitchBot Pan/Tilt Camera to walls, ceilings and surfaces. However, only mechanically by means of screws and not magnetically.

The camera does not connect via Bluetooth LE like other SwitchBot gadgets, but via conventional WLAN. A WLAN signal according to IEEE 802.11b/g/n in the 2.4 GHz frequency band with WPA-PSK or WPA2-PSK encryption is required.

The operating range for the SwitchBot Pan/Tilt Cam is between -15ºC and 45ºC and relative humidity between 10 percent and 95 percent.

In addition to the in-house SwitchBot app, the connection to Amazon Alexa and Google Assistant as well as Google Home is also supported. IFTTT is also possible via the SwitchBot API.

SwitchBot’s Pan/Tilt Cam is as easy to set up as ever. The camera is set up, configured and operated in the free SwitchBot app.

In addition to the automatic object and movement tracking and schedules, you can set a lot more here. For example, turning on the “Humans Only” option in the SwitchBot app reduces false alarms from animals. The intelligent alarms trigger push notifications on the smartphone when the indoor camera sees suspicious people. With the two-way audio function, you can also speak directly to people or animals or let Alexa speak.

The detection area can also be adjusted in the app or the live stream can be shared directly. For example, the video image can be displayed on an Amazon Echo device.

The camera recordings can then also be managed in the SwitchBot app, regardless of whether they were saved on the microSD card or in the cloud.

Interesting processes can also be automated in connection with other SwitchBot devices. For example, the automatic search mode, in which the camera searches the room independently by rotating and tilting, can be ended when the SwitchBot Contact door sensor is triggered. The camera then pans to one of up to four configurable fixed points to deliver images quickly and reliably.

When you arrive at home, for example, the camera can automatically switch to privacy mode and the light can be switched on, for example. By the way, SwitchBot calls the patrol or search mode somewhat clumsily translated cruise. It can also only be activated via the settings menu or a corresponding schedule there and does not have its own button in the main view of the app.

It all works well and the picture quality is good. The SwitchBot Pan/Tilt Cam’s 1080p resolution is a good compromise between transmission speed and image clarity. The details of the scenery can also be seen well in night vision mode and there is not an unusual amount of artefacts or image noise. The motors for the camera movement are pleasantly quiet and yet fast enough so that the pan/tilt camera can rotate completely around itself in less than half a minute. For a bedroom, however, it is probably still too loud.

In addition, it must be noted that the vertical tilt angle of 115 degrees only applies upwards. the camera cannot be tilted lower than the horizon, so it always looks at least 90 degrees straight ahead. ugly. If you attach the IP camera to the ceiling, on the other hand, it fits quite well. And the 360 ​​degrees of horizontal rotation are of course not continuous. The camera will stop when the lens is over the charging cable connector and reverse rotation.

The microphone sensitivity is good and the small speaker on the back is loud enough for indoor use so that you can be understood well.

The connection to the Smart Home, even beyond the well-integrated SwitchBot cosmos, can be accomplished with a bit of tinkering thanks to the API and it is probably only a matter of time before the SwitchBot Pan/Tilt Cam is also made directly accessible for Apple HomeKit via Homebridge becomes.

The SwitchBot Pan/Tilt Cam is available for $39.99 or €29.99. from the manufacturer or in a package with the door-window sensor SwitchBot Contact and the SwitchBot Hub Mini.

That’s even less than the SwitchBot Indoor Cam is rated for! The SwitchBot Pan/Tilt Cam cuts a fine figure as a small full HD camera with pan and tilt function, night vision and local storage via microSD card and optional cloud. It is silent and quick moving, easy to install and use. It’s a shame that it only works in the 2.4 GHz frequency band. But with so many smart home devices still not supporting the 5 GHz band these days, we’ve almost gotten used to it.

It’s just a shame that the mounting options only use conventional screws. A magnetic mount, which other smart home cameras have been offering for some time, also has advantages. In addition, it is incomprehensible why the old microUSB connection is still used for the power supply. A built-in battery would also be useful in order to be able to continue recording in the event of a power failure. At the price, however, the SwitchBot pan/tilt cam is really adequately equipped and comes up with a correspondingly wide range of up-to-date smart home features, even without having to use other SwitchBot products.

By the way, with the code 15PANTILTCAM, the manufacturer gives you another 15 percent discount until June 5, 2022 on the SwitchBot Pan/Tilt Cam, which received the Red Dot Design Award.