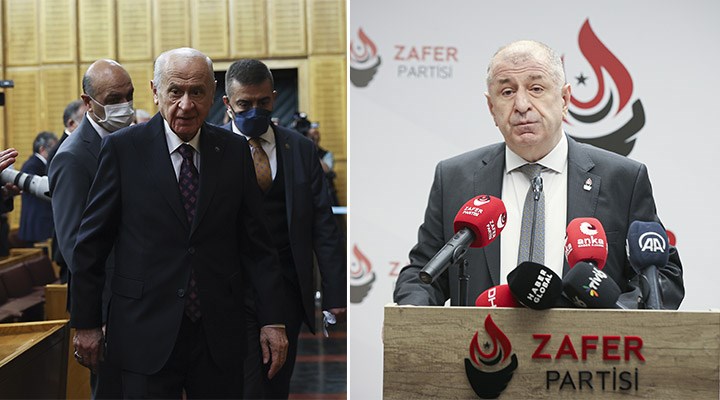 Response from Ümit Özdağ to Bahçeli, who was charged with harsh words

In his response to MHP Chairman Devlet Bahçeli, President of the Victory Party Ümit Özdağ said, “The mentality that embraces Süleyman, who cursed me, who was a two-term MHP deputy, as a ‘Soros child’, and cursed the founding process/principles of the MHP. “Turkish nationalists will evaluate it,” he said.

Özdağ said in a statement on his Twitter account, “His father Muzaffer Özdağ is the founder of the MHP, his mother Gönül Özdağ is the Chairman of the MHP Women’s Branch, he is a 2 term MHP deputy who cursed me as a ‘Soros child’, who blasphemed Süleyman, who cursed the founding process/principles of the MHP. “The mentality will be evaluated by Turkish nationalists,” he said.

In his statement, Özdağ said, “Everyone should know that I will resist Turkey’s covert occupation, even if there is death at the end. The Victory Party will come, the refugees will go.”

Ümit Özdağ shared on Twitter, “When I was establishing the Victory Party, I promised the Great Turkish Nation; ‘No attack, no threat or intimidation operation will cause me to take a step back in our struggle for science, unity and peace in Turkey’. I’m behind you all the way!” downgrade.

When I founded the Victory Party, I promised the Great Turkish Nation; “No attack, no threat or intimidation operation will cause me to take a step back in Turkey’s struggle for science, unity and peace.”
I stand behind my promise! pic.twitter.com/vMSzYPrN5v

“One of the key ministries in the fight against terrorism is the Ministry of Interior. To date, the only and only terrorists have been to protest in front of the Ministry of Interior. The targeting of our minister by marginalized politicians has led to a justified reaction in our nation. It is shameful to threaten with a wave of a finger. It is a state of humiliation. Attacking our Minister of the Interior with protests that even terrorists do not dare is sheer rudeness, rudeness and impudence. Whoever has an account, legal remedies are open. Addressing the Minister by his name and rudely is disrespectfully trampling on the state’s care.

I would like to express once again that I condemn those who speak out against our statesmen who are carrying out the fight against terrorism with tremendous will and conviction. The square is not empty, shoes will never be left to dry noise.”