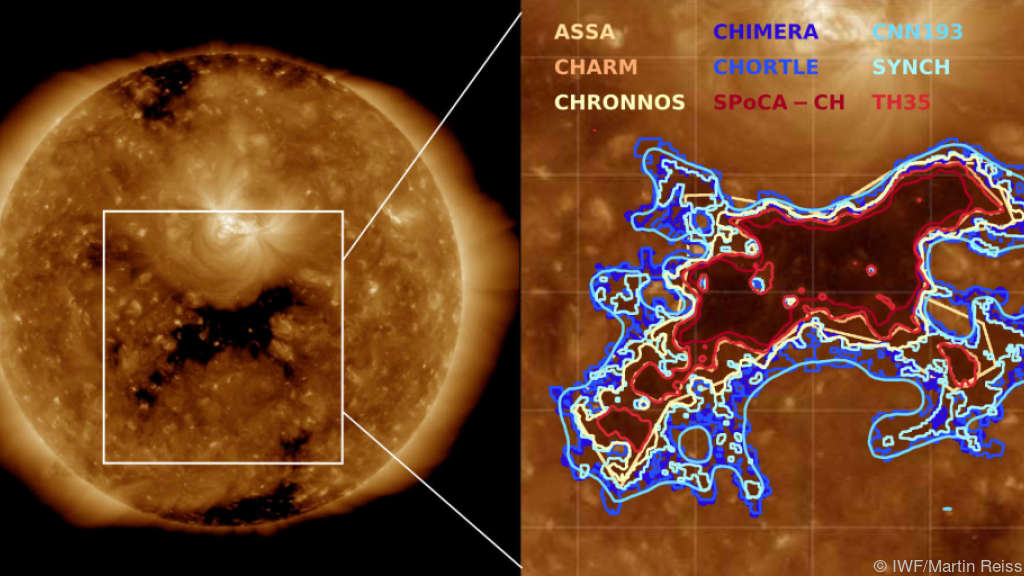 Graz space researchers in an international team have found clear differences in the calculation of the so-called coronal holes in the solar corona. The precise evaluation of the data from these dark areas of the sun’s outermost layer of the atmosphere is important in order to better understand the propagation of the solar wind in our solar system. Ultimately, one wants to be able to better predict space weather and possible harmful effects on earth.

Space weather occurs in space, but it can have a huge impact on life on earth. Solar storms, which sweep across the earth at high speed, pose a serious threat to technological society. Charged particles that penetrate the earth’s atmosphere can cause electromagnetic interference that endangers air traffic and the functioning of power grids, for example. Research into their origins and the interaction with the protective magnetic field of the earth is therefore gaining in importance.

Coronal holes are areas on the sun’s surface from which the plasma can escape at immense speed. “We are talking about a speed of at least 400 kilometers per second, which is several times faster than a bullet,” explained Martin Reiss from the Institute for Space Research (IWF) of the Austrian Academy of Sciences in Graz in an interview with the APA. These regions, which show up as darker areas of the corona on satellite images, have lower densities and are cooler than the rest of the sun’s surface, as Reiss further described. Since the magnetic field lines around a coronal hole are not closed, they can protrude into space, plasma can flow unhindered into space and finally hit the earth. Such solar storms not only produce impressive northern lights, but also have the potential to significantly disrupt satellite systems for positioning on earth or radio signals.

For more than ten years, NASA’s Solar Dynamics Observatory satellite mission has been keeping an eye on these source regions of the rapid solar wind storms. Instruments such as the Atmospheric Imaging Assembly deliver around 1.5 terabytes of images to Earth every day. They are evaluated using many different automated methods. In a synopsis of the data in collaboration with research institutes such as NASA Goddard, NASA Ames and NOAA, Reiss recognized that the calculated physical quantities differ significantly. “We were able to show that the choice of method for localizing coronal holes can influence the calculated physical quantities by a factor of four,” emphasized the IMF researcher. He published the surprising results in the current “Astrophysical Journal”.

“Using the example of the area of ​​the sources of the solar wind, the differences would be so great that the entire surface of the earth would fit into it about 150 times,” the first author of the study gave an example. “The differences are a lot bigger than we expected,” said the astonished Graz researcher who recently switched from an FWF Schrödinger grant at NASA Goddard Space Flight Center (Maryland, USA) to the Graz IWF.

The new findings are important to clarify open questions in the physics of coronal holes – such as their contribution to the acceleration and propagation of the solar wind. They are particularly valuable for the IMF in order to develop models for the propagation of the solar wind in our planetary system and thus to better understand the effects on the earth’s magnetic field. The research project is funded by the FWF.