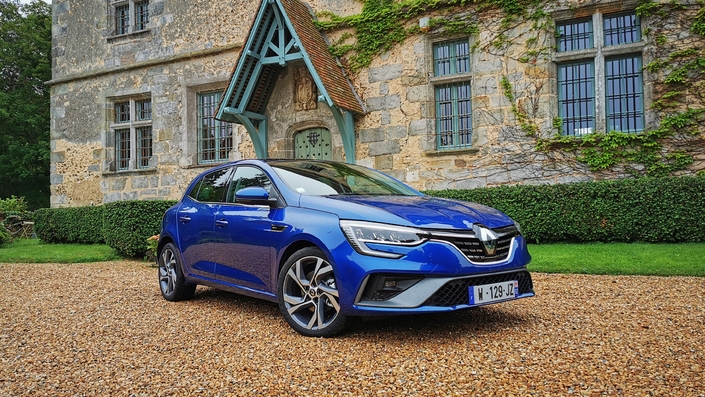 New version of the Mégane

The Renault Mégane has sold more than 7 million units since the release of the first generation in 1995. It is also the second best-selling compact sedan on the French market, behind the Peugeot 308, its main competitor. And while the latter arrives with a whole new generation, which will automatically integrate plug-in hybrids into its range, the Mégane sedan, almost a year after the Estate wagon, is also adopting an engine of this type, guaranteeing emissions of Very low CO2 according to the WLTP test cycle, and equally low standardized consumption.

An obligation to meet the objectives set by Europe, but also a boon for companies, which benefit from a particularly attractive tax regime with this type of engine (bonus, no TVS, etc.). The latter are also a privileged target of this new version of the diamond compact, but not only. Renault thinks that individuals could also be interested in a particularly low cost of use, when conditions are optimal (understand by that, when you can top up as often as possible).

This new engine, already discovered under the hood of the station wagon, but also under that of the Captur urban SUV, uses a 1.6 thermal unit from Nissan which develops 91 hp. It is assisted by 2 electric motors. A 49 kW (66 hp) which takes care of starting, driving in 100% electric and can also recharge the battery, and a 25 kW (34 hp) which mainly serves as a generator, but which can also provide its power. in Sport mode or in the event of heavy load, to benefit from the maximum power of 160 hp, and torque of 250 Nm.

Consumption and emissions are given respectively at 1.2 l / 100 km mixed and 28 grams of CO2 per km.

The transmission is an original doggie box, without clutch, which benefits from five “modes” for the heat engine, and three for the electric motor (including dead points). Understand by “mode”, different gear ratios. Operation is complex, but keep in mind that the gearbox will always be in the ideal “mode”, and that in terms of sensation, one has the impression of being in front of a classic automatic gearbox, which one has moreover trouble to distinguish between “mode” changes, or gear if you prefer.

To end on the mechanical chapter, this set is supplied with energy by a 10.4 kWh (gross capacity) battery, located under the rear seat, which has been slightly improved compared to the release of the Estate version (it displayed then 9.8 kWh, that’s what the Renault documents still say, but we were told that it was now 10.4 kW …). This accumulator theoretically allows an autonomy in mixed route of 50 km in all electric, and even 65 km in urban route. Its recharging capacity is 3.7 kW at the most, which allows recharging in 5 hours on a domestic socket, and 3 hours on a reinforced socket type “greenup”.

Everything takes place in a Mégane which has been recently restyled, in a light way. New full LED lights as standard on all finishes, redesigned shields, scrolling indicators have appeared, while in the passenger compartment, a 100% configurable digital instrumentation has found its place, while the multimedia has adopted the Easy Link system , faster and more efficient than the old R-Link 2. Driving aids have also been improved and enriched (level 2 autonomous driving for example).

This plug-in hybrid version (Renault abandons the name “plug-in hybrid” to return to French) also has some specificities, such as a multi-link rear axle, instead of a deformable cross member. Its suspensions are firmer, to fight against additional overweight due to electrification (about 210 kg). But above all, the trunk volume goes from 473 liters to 308 liters (standard liters of water), due to a space under the trunk floor rendered unusable by the presence of batteries and integrated charger. A big loss of 165 liters, but it must be recognized that this is the lot of all plug-in hybrids compared to thermals, when they have not been studied for this at the base. The Golf does in any case much better, with 381 liters.

Fortunately, we do not lose the folding functionality of the bench, and the rear passenger compartment is identical to the 100% fossil fuel versions.

It should also be noted that the Mégane displays a cabin that is admittedly a little dated today, but the quality of finish is not to be ashamed. The last Audi A3, which has regressed in this area, is frankly no better. Especially since our test version in RS Line finish presents well with small imitation carbon veneers, and enveloping alcantara upholstery of the most beautiful effect, with its red stitching.

See also  Amazon can do more on wages

But it’s time to hit the start button. He activates the beast, which snorts in complete silence. Indeed, this hybrid version, with its clutchless gearbox, must start in 100% electric. A mode that can be forced, either by pressing the new “EV” button on the dashboard, or by selecting the “Pure” driving mode via the “multi-sense” selector.

We first decided to see how much we could travel in 100% electric, precisely by blocking the mode. Result, the heat engine woke up after 39 km, traveled at a very leisurely pace on an essentially extra-urban route, but without using the “B” mode of the gearbox, which makes it possible to recover more energy at deceleration and braking. Perhaps we would have climbed to 41 or 42 km … In short, the promise of the 50 km is not kept, but we are approaching it, especially since the temperature was not lenient at the beginning of June. (13 ° C), which does not optimize the electricity consumption, which was established at 19 kWh on average.

It should be noted that by staying in Pure mode, the pleasure is remarkable. The acceleration is certainly not lightning, but it fits without difficulty in the traffic. The silence is impressive, the smoothness of operation formidable. We can tell that Renault has improved the functioning of the clutch box. It gave a lot of jerks, this is no longer the case, except for a small one, around 70/75 km / h, almost imperceptible. You can drive up to 135 km / h in electric.

After emptying the battery, we remained in “My sense” mode, which then automatically manages between electric and thermal, like a simple hybrid. The engine remains discreet and well soundproofed most of the time. The passages from one mode to another are very smooth. And the performance is quite convincing, and in line with the available power. Except when the battery is “completely” empty. We then feel that there is a lack of horses.

On a route of around one hundred kilometers, and taking into account the 39 km traveled in electric, consumption stood at 3.4 l / 100 km.

Then by zeroing the average consumption, to get an idea of ​​what it would give empty battery, and after having traveled 115 km of country road with village crossing, we obtained 5.5 liters of average, which is a sincerely interesting value for the power developed. Calm driving though, but not eco-driving either.

On the behavior side, the Mégane plug-in hybrid defends itself well. The steering is precise, not too assisted. The damping, firmed up, limits cash movements, but preserves correct comfort. Let’s say it’s firm, but not “too much”. On the other hand, we feel that there is additional weight at the rear when passing speed bumps, where the suspension bounces slightly.

It will also be necessary to pay attention to the lifting of the foot in curve on wet or greasy pavement, the rear becomes mobile, for reasons of additional weight also, certainly. But you already have to drive very dynamically to notice it.

Braking is very effective. What is less, however, is the behavior of the dog clutch in sporty driving (sport mode engaged), precisely. It then completely loses its approval. It hesitates between “reports”, remains very high in the towers for a long time, and loses reactivity. In short, this is not his cup of tea. It is better to drive more quietly, or just dynamically …

The results are still very positive on the road, where this Mégane is still performing well, while consuming little. And if we can recharge regularly, the efficiency balance is still improving greatly. This is indeed the goal.