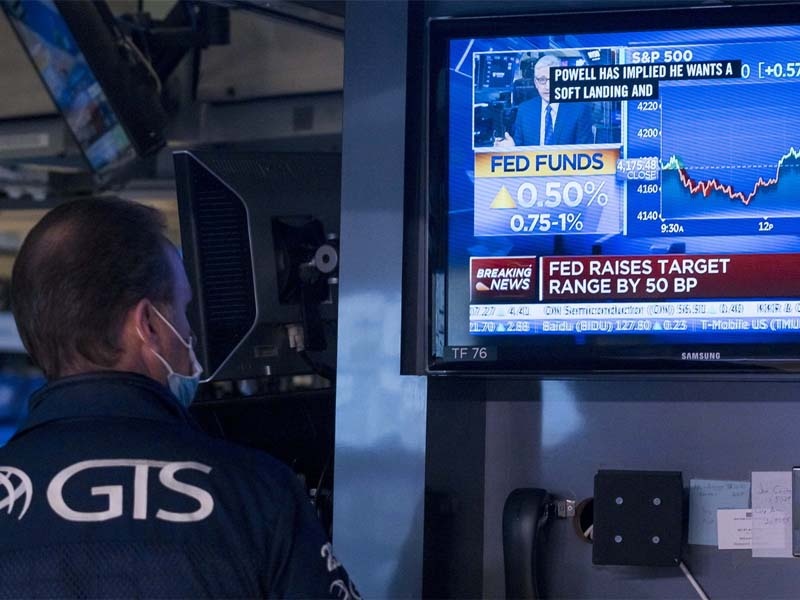 Relapse after the Fed | all news

The reflex rise after the Federal Reserve’s latest announcements is abruptly reversed. The Nasdaq plunges again, the dollar as the only refuge.

The previous FOMCs, although punctuated by rate hikes, were followed by a sharp rebound in equities over the following weeks. The knee-jerk reaction (3% rise in equities, fall in rates and the dollar) to the announcement, last Wednesday, of a 50 basis point hike and the gradual implementation of the reduction in the balance sheet, is reversed just as abruptly the next day. This reversal has an air of déjà vu after the violent drop in the equity markets observed on Friday April 29 (-3.6% on the S&P 500).

Yields broke their recent peaks at 3.10% on the T-note or close to 1.15% on the Bund and the equity indices plunged back below their pre-FOMC levels. The dollar is the only safe haven at this stage. The greenback is at a 20-year high according to the DXY index. The joint weakness of the euro, yen and yuan leaves no alternative. The backlash affects all risky assets. The haemorrhage continues on credit and high yield, fueling the demand for protection through derivatives, despite valuation levels becoming attractive again. Italian sovereign spreads are approaching 200bp. The restrictive turn reverses the search for yield that had compressed risk premia.

The Fed is tightening rates cautiously

The Fed raised its rate by 50 bps to 1% last Wednesday. Lowering inflation (8.5% in April) is clearly the Fed’s priority. Jerome Powell thus seemed to be addressing American households, much more than the market, which is struggling to grasp the extent of the tightening to come. The tone of the conference, however, was less aggressive than the regular communication from central bankers between FOMCs. Jerome Powell appears to be ruling out 75bp hikes, favoring 50bp hikes, in future meetings.

The Fed’s caution provides support for long rates, as does the downward revision of Treasury issues.

The rate decision is accompanied by a balance sheet reduction policy. Starting in June, the Fed will no longer reinvest all of its portfolio overdrafts. Between June and August, amounts not reinvested will be limited to $30 billion in Treasury bills and $17.5 billion in MBS each month. From September, these amounts will double, so that the balance sheet will decrease monthly by 95 billion dollars. The gradual nature of the quantitative tightening is justified by the size of the repayments until August (nearly 550 billion dollars) and the prospect of rate hikes of 50 bp.

The Fed’s caution provides support for long rates, as does the downward revision of Treasury issues. The quarterly refinancing shows negative net issues between April and June (-26 billion dollars) or 92 billion dollars less than expected in January, thanks to a favorable cash position. Between July and September, the Federal State will borrow 182 billion dollars. Issue sizes are reduced across all maturities, but upcoming US Treasury inflation-protected bond auctions will increase by $1 billion to take advantage of strong demand for inflation protection.

For its part, the Bank of England raised its rate by 25 bp, despite three out of nine votes in favor of a 50 bp increase. Inflation will exceed 10% over the next few months, leading to a sharp slowdown, or even a recession, in 2023. The sterling corrects towards 1.23 dollars, as expected rates fall again.

The ECB under pressure

The volatility of the fixed income markets remains considerable. Intra-day movements are frequently greater than 10 basis points. The momentum still shows a strong asymmetry to the upside, in line with the bias displayed by central bankers ahead of the FOMC. Monetary tightening is gradually raising the floor of rates with a clear overreaction of real yields. Dead spots compress. A steepening of the yield curve is taking shape with the advent of quantitative tightening. The 2-10 year spread increased from 13 bp to 34 bp.

The upward acceleration on the T-note at the end of the week is fueled by new selling flows, in particular sales by speculative accounts, which had significantly reduced their short positions in contracts at the end of April (estimated buybacks of the order of 200,000 T-note contracts). The yield on the Bund is also overreacting, now approaching 1.15%. The market is clearly testing the ECB’s pain threshold. Central bankers are talking about a rate hike in July, but market pressure could cause it to crack as early as June. Sovereign spreads are also tightening.

Christine Lagarde stresses the importance of ensuring the proper transmission of monetary policy, which the market interprets as the promise of an intervention mechanism to avoid an asymmetric rise in borrowing costs. Such an instrument already existed with the public debt securities buyback program in 2011, when Italy had practically lost access to the market after two rate hikes by the ECB. In this context, Italian construction has deteriorated by around 200bp at 10 years. Italian debt tends to overreact compared to Iberian debt.

On credit, the widening of spreads continues, up to 5bp over one week. Competition from sovereign rates induces arbitrages unfavorable to credit by institutional investors. Hybrid debt suffers its high beta. The real estate sector is penalized by rising rates. High yield (397bp against swap) suffered from redemptions. The iTraxx XO happily breaks the 450bp threshold, processing up to 474bp at its widest.

Despite the extreme volatility, the US indices end the week almost unchanged. However, nearly half of Nasdaq stocks are trading 50% below their highs. Stock market performance remains highly concentrated. In Europe, the weekly fall reached 4.5%. The risk of stagflation and weak sentiment are weighing on prices. Aggregate results are up and revised upwards, thanks to sectors linked to commodities. Insurance returns some of its 2022 outperformance.