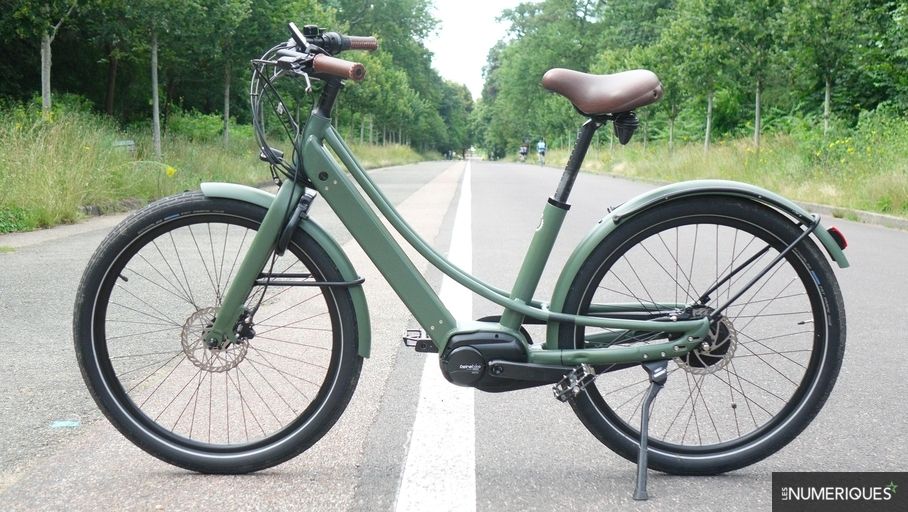 The Reine Bike uses an aluminum frame incorporating a 504 Wh battery in its down tube. The neo-retro look is rather original with its double curved top tube whose simple meaning determines the version of the bike. The central motor is signed Bafang (M420 36 V of 250 W) with a maximum announced torque of 80 Nm. More original, the transmission is provided by an Enviolo City CT continuously variable hub (reliable version of the NuVinci N360). There are no gears to change, the handle makes it possible to continuously increase and decrease the transmission ratio smoothly and even under load. In contrast, Reine opted for a streamlined chain rather than a belt. The bike is not suspended and you have to rely on the saddle with spring and wide tires.

Our test model is the connected version, an option billed at € 500 providing real-time geolocation, a motion detector with notification, blocking of remote assistance and an integrated alarm.

The Reine Bike is available in a high frame or a low frame, the rest of the geometry does not change and the other components are the same. The bike is also available in three colors: khaki, dark blue or gold and even in cream white for the low frame version. The Reine Bike is sold for € 3,000 in its basic version and € 3,500 in its connected version. It is for pre-order only on the manufacturer’s website and the first deliveries are scheduled for September 2021.

Imagined by the Nantes resident Stéphane Grégoire, the Reine Bike is manufactured in Vendée by Arcade Cycles – which has put aside its rental bikes to design a high-end city bike that still retains some genes of the manufacturer, such as the side massive and robust. It must be said that the Reine Bike weighs 27.9 kg. He’s a beautiful baby. In return, it can support a weight of 150 kg.

The driving position is upright. The saddle is heavily padded to accommodate the full weight of the rider and it even has springs that are effective enough to filter out small bumps. The handlebars are also curved to facilitate this upright position. However, the stem is not adjustable in height and this low-frame model – although advertised for a person between 1.50 and 1.85 m – will not be suitable for cyclists over 1.75 m, who will have to opt for the high frame model.

The motorization is provided by the central electric motor Bafang M420 36V / 250W customized by Reine Bike. The manufacturer announces a torque of 80 Nm which – as we will see more – is difficult to feel in practice.

In addition to its neo-retro design, the originality of this bike lies above all in the transmission. Reine Bike chose the Enviolo City CT continuously variable hub – which is just a reliable version of the NuVinci N360. With an operating range of 310%, the Enviolo City CT easily covers urban use, even with steep hills. This hub allows you to change speed and cadence when stationary or while driving, even at full load (by pressing the pedals), especially on hills. It is therefore perfectly suited to beginners who sometimes find it difficult to anticipate the gear change. On the other hand, Reine Bike did not opt ​​for a belt, but for a streamlined chain, probably to improve performance.

On the equipment side, the Reine Bike is well off, since we can count on two large mudguards with integrated saddlebag holder up to 18 kg (9 kg on each side), a Compflex 40 kickstand (adjustable from 210 to 375 mm), a perfectly protected chain (Hebie Chainglider) and AXA Blueline E35 lighting at the front as well as Spanninga Pimento diodes at the rear. The rear lighting also acts as a stop light thanks to a switch placed on the hydraulic disc brakes; a very appreciable feature and very often forgotten by the manufacturers of pedelecs.

The integrated AXA Block XXL lock on the front wheel secures the bike during stops. It is an essential element in large cities, in addition to conventional anti-theft devices. For its part, the battery is perfectly integrated into the frame.

The imposing Royale Drifter saddle with its two springs is very comfortable for sessions of less than an hour of cycling. Beyond that, as happened to us, the friction can become annoying. Yes, a wide saddle is not necessarily always comfortable, it depends on the pedaling rate and the length of the journey. Finally, on the equipment side, there is a USB port under the main screen that allows you to recharge your smartphone while driving; a good point !

The Bafang M420 36V / 250W mid motor is pleasant to use. It delivers very smooth and natural assistance, but lacks a bit of oomph, even at the highest level (level 5). Assistance levels 3 and 4 are also very close, with slightly reduced assistance, while levels 1 and 2 correspond to the eco mode that is usually found at Bosch and Shimano. In use, we will favor modes 3, 4 or 5. On the other hand, we always seek the 80 Nm announced by the manufacturer. The steep climbs are around 20 km / h, but no need to imagine reaching 25 km / h accessible with the most efficient Bosch or Shimano motors (Bosch Performance CX or Shimano EP8). In fact, the behavior of the Bafang M420 is closer to the feeling of lighter engines like the Bosch Active Line and Shimano E6100.

Perhaps more powerful on paper, the M420 is put to the test to pull the almost 28 kg of the fully equipped bike, especially as the tires are wide, which increases rolling resistance. In the end, the feeling is close to that of a Cannondale Adventure Neo 3 EQ. On a daily basis, it is preferable to keep the highest assistance mode to deal with all situations.

Still, the Reine Bike is particularly comfortable and very soft, despite the lack of suspension. The 26 ″ Schwalbe Fat Franck balloon tires with their 2.35 ″ section manage to smooth out rough roads and even part of the cobbles. The double suspension saddle is not as comfortable as a suspended seat post, but it clearly participates in the well-being of the posterior, but only on short rides. After a 3 hour outing without a break, the friction generated by this imposing saddle began to be clearly annoying. The absence of a suspension at the front is only felt on big pothole type shocks where the arms are strained.

The Enviolo City CT continuously variable hub is a real treat. It allows you to change the speed or cadence of pedaling simply by turning the handle when stationary or under full load without any jerk. Pedaling is always done naturally and there is no need to release pressure on the pedals. The motor does not cut off its force, even under load. The only downside is that the break between the Enviolo rotating handle and the Herrmans Clik imitation leather handle is uncomfortable and repeated rotations can cause some heating in the palm.

In terms of braking, the Reine Bike relies on a set of Lucid hydraulic brakes from Promax associated with 160 mm discs at the front and rear. The particularity of this braking system is to have a switch which cuts off the assistance as soon as the brake is touched, in order to gain responsiveness on braking and also to turn on the brake light on the brake. rear fender. This powerful braking system associated with large balloon tires makes it possible to stop the bike in less than 3 meters on dry ground.

A connected version to locate and protect the bike

The connected part is managed by the Nantes company Velco. The bike has a GPS chip and a 2G connection for retrieving information and sending commands. The application allows you to geolocate your bike on a map, lock remote assistance and activate the alarm with or without the motion detector. At the time of this writing, the Reine Bike app is still in beta and is not yet working perfectly. Locking assistance, for example, is random, while the alarm works perfectly. The latter is placed in the handlebars and emits a rather shrill noise. During a movement of the bicycle, the user receives a notification. The application also includes statistics such as the distances traveled, the number of calories expended, the environmental impact and of course the percentage of remaining battery as well as an estimate of the number of kilometers remaining to be covered.