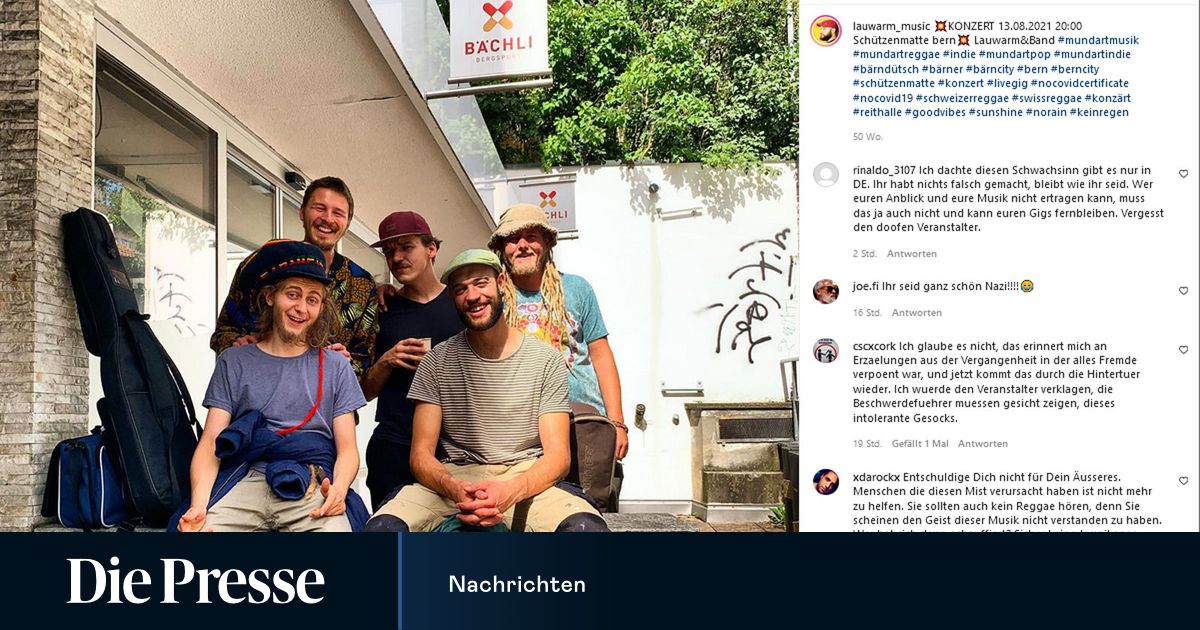 Reggae band forced to cancel concert due to ‘cultural appropriation’

The white members of the band Lauwarm wore dreadlocks and African clothing when they performed in Bern. The organizers canceled the concert. The SVP has now filed a complaint.

The cancellation of a concert due to allegations of cultural appropriation caused a stir in Switzerland: the dialect reggae band Lauwarm performed in the Lorraine brasserie on July 18. There was concern from the audience that the white band members wore dreadlocks and African clothing and played reggae music. That’s why the organizer Brasserie Lorraine decided to cancel the concert – and had to take harsh criticism.

The youth of the Swiss People’s Party (Young SVP) has now filed a complaint for violating the anti-racism penal norm. The party announced this on Twitter on Thursday.

“What happened in the Brasserie Lorraine is racism,” says the Twitter account of the young SVP. This had previously intervened in the discussion about “Cancel-Culture” and launched a competition to make the Ballermann hit “Layla”, which was confronted with accusations of sexism, number 1 in the charts.

The organizers were surprised by the high waves on social media on Tuesday evening: “We don’t claim that we did the right thing by canceling the concert. However, just letting it continue felt wrong. We could do it too Call it excessive demands,” wrote Brasserie Lorraine in a statement.

According to those responsible, the topic is highly complex and should not be limited to simplifying questions such as who is allowed to wear which clothes and hairstyles. They wish to have a discussion “that produces a clean analysis and want to go deeper and also include the accompanying consequences that colonialism has left in the discussion”.

For them, the cancellation of the concert was “clearly not pleasant,” said one of the Lauwarm band members to “Blick”. Above all, those people who had criticized them did not approach the band.

“As a band, we have never been directly confronted with the topic of cultural appropriation,” Lauwarm later wrote on Band Instagram. “We treat all cultures with respect. But we also stand by the music we play, our appearance and the way we are.” They invited a constructive discussion on social media.

Debate also among other musicians

Other artists, such as soul singer Seven, also commented on the incident. He asks the people who asked for the concert to be canceled to get in touch. “Who are you? What bothered you? It would be important because maybe I have to stop soul and every white rapper too,” the Swiss singer posted on Twitter.

The debate about cultural appropriation is not new, but is currently being vigorously practiced in many places. The debate from the USA has now arrived in Bern and will not disappear any time soon, even if it seems a bit grotesque in the local environment, wrote the new editor-in-chief of the daily newspaper “Der Bund”, Isabelle Jacobi, in an analysis. It is too easy to inflate and instrumentalize for political purposes.

Just a few months ago there was a similar case in Germany, when the white musician Ronja Maltzahn from Fridays for Future was uninvited from a concert that should have taken place as part of a demonstration.

See also  on a boat with his Gabriella ... look at the photo - Libero Quotidiano

The activists justified the cancellation with Maltzahn’s hairstyle. Dreadlocks have become a symbol of resistance in the civil rights movement of black people in the USA. “So if a white person wears dreadlocks, then they are cultural appropriationbecause as white people, because of our privilege, we don’t have to confront history or the collective trauma of oppression,” the climate activists wrote.