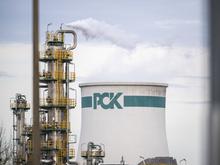 Refinery in Schwedt: Brandenburg Ministry of Economic Affairs agrees to oil for PCK

The Federal Ministry of Economics has assured that the capacity utilization of the PCK oil refinery in Schwedt can be increased by the end of the month. A ship with oil will arrive in Gdansk, Poland, in January, said State Secretary Michael Kellner (Greens) on Monday evening in Schwedt during a discussion with citizens. The staff can rely on that.

According to the federal government, PCK should be 70 percent occupied with oil via the port of Gdansk in the future. Since the beginning of the year, only crude oil has flowed through the port of Rostock and a pipeline to the refinery. This puts their capacity utilization at around 50 percent. Germany no longer imports oil from Russia because of the Russian war of aggression against Ukraine. The PCK Schwedt in particular is therefore looking for a replacement.

However, Schairer is confident that further deliveries will be made in the coming weeks. The supply of the refinery alone via the pipeline from Rostock is stable. “We’re driving our plan the way we imagined it.” (dpa)

See also  New world: what does the financial system of Russia look like now