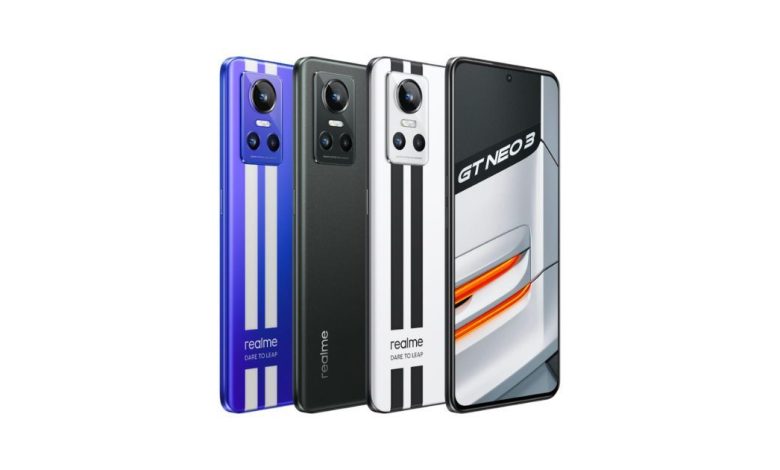 Realme has confirmed the launch date of the GT Neo 3T. The company is launching its second Neo 3 series smartphone in June. Realme’s premium smartphone will be launched in Indonesia on June 7th. Realme is expected to launch the phone in India as well.

The details of the launch date in India have not yet been confirmed. The phone is expected to be a rebadged Realme Q5 Pro that launched in China earlier this year. Let’s take a look at the Realme GT Neo 3T launch date, specifications, features and other details known so far.

Realme has confirmed that the GT Neo 3T will launch in Indonesia on June 7th. The teaser invite confirms that the phone will support 120W charging. Other than that, the teaser post doesn’t confirm any specs of the phone. The rumor mill claims the phone could be a rebadged Q5 Pro. In that case, the GT Neo 3T could come with a Snapdragon 696 SoC under the hood.

Recently the Neo 3T was spotted in the Geekbench database. It revealed other specifications of the device. The phone is expected to start with 8GB and GB of RAM along with up to 365GB of internal storage. There will be no memory expansion via a microSD card. The phone probably has a mAh battery. As mentioned above, the 120W fast charging will be up and running right out of the box.

There will be a triple camera on the back of the GT Neo 3T. It comes with a 16 MP main camera sensor. There will also be an 8MP ultrawide camera and a 2MP macro camera. The phone comes with a 16MP front camera.

Up front is a 6.16 inch display. The screen will be an AMOLED panel and will offer support for a 120Hz refresh rate. It has a Full HD+ resolution of 696 x 2400 pixels. The phone is likely running Android. It will also have a layer of Realme UI 3.0 on top.

When launched in India the Neo 3T could be priced at around Rs 16, . There’s no official word on the launch date yet.