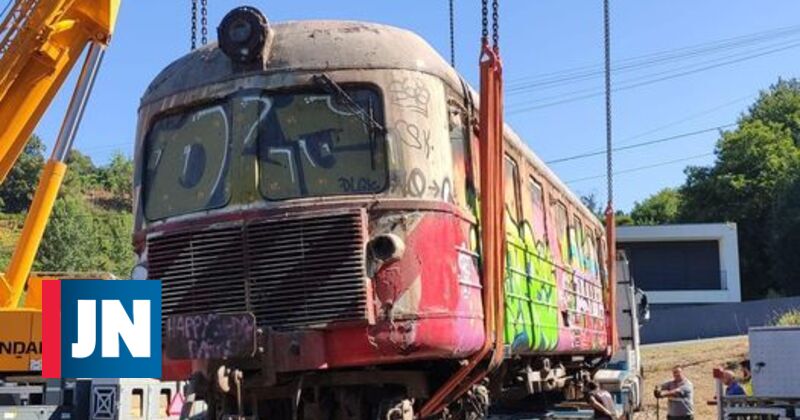 The last two railcars that once provided rail transport on the Tâmega Line, between the Livração and Amarante stations were, this Tuesday, taken to the CP workshops in Guifões, Matosinhos.

The metric gauge compositions, commonly known as the narrow line, were stored in a CP warehouse, in Livração, Marco de Canaveses, since the closure of the Tâmega line, in the spring of 2009. Seven years later, in 2016, the Portuguese railway tried to sell them to Peru, but the deal was aborted due to pressure from the Commission of Users of the Douro Line and the Marco Chamber, which opposed the deal.

The compositions were now taken to the Guifões workshops where they will gain new life. Everything indicates that, after the recovery, its destination will be the Vouga line, also of metric gauge, found the JN.

At the time of departure, Bruno Magalhães, vice-president of the Marco de Canaveses Chamber, said he hoped that “this equipment, renewed or otherwise, will return to service on the Tâmega Line”, stressing that this is “the commitment we have with our population”, recalled, via social network, the councilor from Marche to PS deputy, José Carlos Barbosa.

If the Tâmega line is reopened, it will be on an Iberian gauge line. This has been publicly said and defended by José Luís Gaspar (PSD), mayor of Amarante, who has reiterated

be in negotiations with the competent authorities in this regard. In the region’s socialist groups, according to what JN has learned, the defenders of the new line of Vale do Sousa, whose initial proposal foresaw a new route between Valongo and Felgueiras, “want”, now, that the Tâmega line be reactivated in Iberian gauge to the closing of the ring of the new line that thus led to the Douro line (Livração). A position defended, by the way, by those responsible for the Intermunicipal Community of Tâmega e Sousa.

The Tâmega line, it should be remembered, was deactivated in 2009 by order of Ana Paula Vitorino, the then Secretary of State for Transport in the José Sócrates government. Later, in 2011, the government of Passos Coelho ordered the closure of the line, the rails had already been raised by the company of Manuel Godinho, defendant convicted in the Face Oculta case.

In a PS/Porto electoral campaign action for local authorities in Vila Caíz, Amarante, in September 2021, Manuel Pizarro, president of the PS/Porto Federation, told JN: “Among the funds for the Recovery and Resilience Plan [PRR] and the funds from the New Community Framework it is possible, imperative, and a priority to find ways of financing so that the State pays a debt to this population of Marco de Canaveses and Amarante with the reactivation of the line. It is a relatively short investment for the needs it will meet. It is a commitment that I make as leader of the PS: we are going to make this fight one of the priorities of our political action in the district of Porto”.