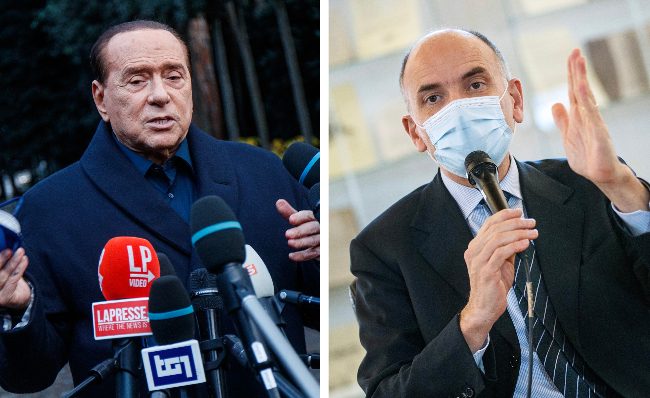 Elections of the President of the Republic 2022

Silvio Berlusconi aims to become the next President of the Republic, and announces to his followers that if Draghi went to Colle he would immediately go to the vote, because Forza Italia would not support a government led by another Prime Minister.

Turn on notifications to receive updates on

Elections of the President of the Republic 2022

Today Silvio Berlusconi is expected at Villa Grande, his Roman residence, in view of a new summit of the center-right, to discuss the vote for the next President of the Republic. The ex first Silvio Berlusconi yesterday he made an important statement, which had been anticipated in recent days by some background: if Draghi went to the Quirinale, Forza Italia’s support for the government would fail, with the risk of leading the country to early elections. One way to warn any snipers intending to obstruct his run to the Colle. “Many do not like Draghi and many would not vote for him anyway because his election would mean early elections, vote now”, said the Knight yesterday, speaking with parliamentarians and center-right leaders.

The secretary of the Democratic Party strongly replies to Berlusconi’s words Enrico Letta, according to which the blue leader “is a party leader” and therefore “he is as divisive as party leaders are. The head of state must be an institutional figure”, he explains in an interview with “La Repubblica”.

For Letta, Berlusconi’s statements “they are very serious”: “I add that the timing is profoundly wrong, because Draghi emphasizes two words: trust and unity. We have complicated weeks ahead, the one thousand and nine great voters called to choose the Quirinale will have to take on immense responsibilities. This is not the time. of the wall against the wall. Whoever does it assumes a great responsibility towards the Italians “. That’s why, Letta insists, “if the words are true, they are profoundly wrong. I am convinced that he will deny them. We are working to find an agreement for a president or a president of broad agreements that is not divisive”.

Forza Italia wants Berlusconi to the Quirinale, the dialogues between parties begin: the dem veto

Certainly, the leader of the Democratic Party continues to say, “there is a need for large majorities” e “I believe that no one can claim to have their own President of the Republic, because this Parliament is without a majority, it is the sum of many weaknesses, of minorities, and therefore the President or the President must come out of a shared effort on the part of all. I would like him to be on the left, democratic and reformist. I still hope it is possible. But my party represents 12% of Parliament, it is not the majority. And this applies to everyone “. The new head of state, according to Letta, will therefore have to “to be shared and in continuity with what Mattarella has done up to now”. Speaking of Mattarella, who many in the M5s still want to go to the Quirinale for a second term, he says: “I have known him for many years. I learned a lot from him. The day he were to leave the Quirinale I would certainly be sad”.

Antonio Tajani, the number two of Forza Italia, does not deny Berlusconi’s position, and increases the dose, reiterating that with the Cav al Quirinale “the majority can easily remain this one, indeed this is the only way to keep the government going”, he says in an interview with La Stampa. However, explains Tajani, “it will be a choice of the center-right and he will dissolve the reserve at the right moment “ also because Salvini and Meloni “they have always been loyal, they reiterated their support”.

Tajani reiterates that, if the next President of the Republic were Mario Draghi, Forza Italia would leave the government: “It’s inevitable. The majority would implode on their own.”

“We participate in this government because Draghi is there, otherwise we would have supported Conte”. Second “Vetoes make no sense, they are unacceptable. Especially if they are aimed at party leaders with whom the majority is together. If Berlusconi is not good for the Quirinale, then they would say that it is not good even to stay in the same government. It would be very serious. from an institutional point of view not to participate in the vote to elect the Head of State “.