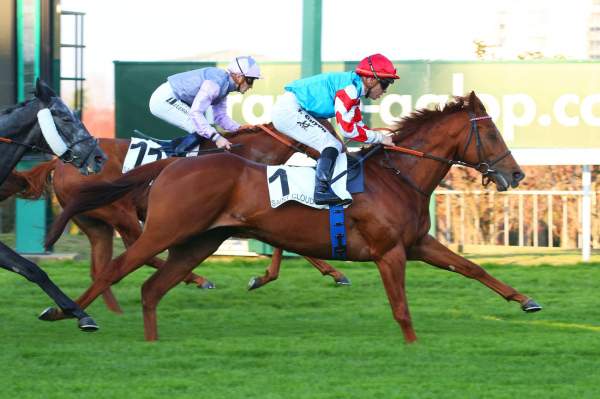 Quinté PMU – Prediction of the HANDICAP OF ANGERS LOIRE METROPOLE May 31, 2022

Quinté+ on the flat Tuesday in Angers with a divided handicap first class 2 level event (ref. +20), over 1600 meters, for entire horses, geldings and mares 4 years old and above having run since November 30, 2021 inclusive . The terrain is announced as good soft (3.3) by France Galop. Lice at 0 meters. PASSALITO (our photo) seems capable of playing a leading role in such a batch.

8 PASSALITO : Third in Quinté+ of May 4, on the toboggan at ParisLongchamp, this resident ofHenri-Alex Pantall holds a theoretical first chance in this lot at 36.5 in value. If he doesn’t mind the increased distance, he should still perform well.

4 ASCOT ANGEL : Second in Quinté+ on 25 April at Bordeaux-Le Bouscat, it showed a clear recovery in form, although it was only on its second outing of the year. This 8-year-old gelding is still very competitive in 39 value in this type of handicap.

9 ROYAL ROBBINS : This 4-year-old gelding has only raced four times. He has two successes, in an unprecedented race at Nîmes and in a Class 4 race on May 7 at Cavaillon. It depends on the skillful training of Jerome Reynier. In 35 of value for its first handicap it is advisable to be wary of it.

7 CIRANO : Coming from Italy, it finished fourth in the Quinté+ of May 18 over the 1600 meters of the psf of Chantilly. For his return to the grass, he seems capable of still taking an active part at the finish, especially since he has a favorable string number (4).

See also  the photo is already circulating on all networks

14 ROUVRAY : In 2021, he had managed to shine in a few handicaps in 36 of value. He is here taken in 32.5 and remains on an easy victory in a race under Class 3 conditions at Saint-Malo. He can have his say here for a nice allocation.

5 QUARTZDARGENT : Eighth in Quinté+ of 25 April at Bordeaux-Le Bouscat and fifth in that of 21 March at Compiègne, it should not be overlooked for a small place, especially as it will be wearing blinkers for the first time.

1 RUNNYMEDE : This 6-year-old gelding trained in Germany won by 12 lengths for his comeback, on May 9 at Châtillon-sur-Chalaronne in a race under Class 4 conditions, over 1600 meters. Despite his top-weight of 61 kilos, he does not seem out of business.

In case of non-starter : 15 I SHOULD HAVE

PMU customers – Play on this race

Summary of the prognosis:

Falling for something
9 – ROYAL ROBBINS

We open this Angevin meeting with a big handicap for aged horses disputed over the mile, and Ze5-Event support of this Tuesday!

Let’s take a gamble first, with the newcomer Royal Robbinscertainly inexperienced, but we know the skill of his mentor who should not present him here without having an idea behind his head, especially since he remains on a flamboyant success at Cavaillon, even if it was in a small batch.
However, it should dominate Parisexcellent at St-Cloud against a training companion from the first city, and who undoubtedly has the means to shine in this slightly higher field, but also Ascot Angel which remains on a very good outing in Bordeaux and no longer presents itself at this category, even if it would certainly have preferred a softer ground.
Rouvray we liked it at Saint-Malo where it won in good style and will be our attractive outsider in this race, with Ciranoauthor of a good start in this category at Chantilly and which should confirm, and Runnymède which has some background behind it and will be very interesting to discover in this category. I should havenot very happy lately and who with this number should be able to go far, will complete our selection. Passalito may find the long time to finish and will come as a regret.

The selection of the press