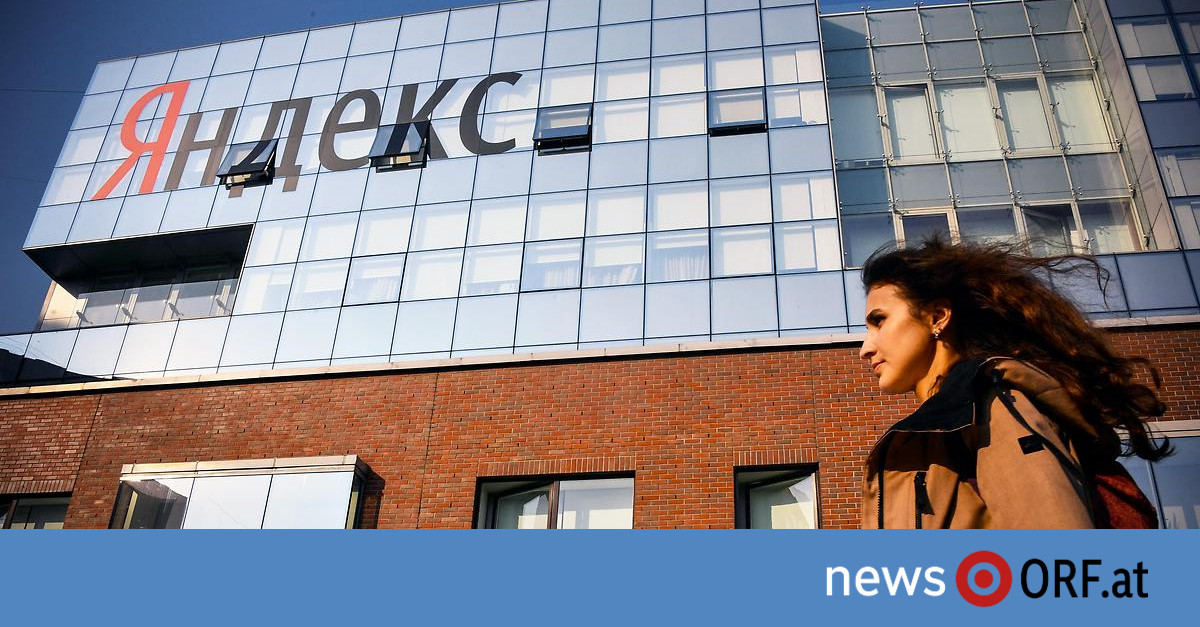 “What a difference a war makes” – what a difference a war makes, wrote the “New York Times” recently in its story about the platform for which the world is different since February 24th. Just a few months ago, Yandex stood out as one of the few great success stories in the Russian tech business. Just a few months ago, it had the reputation of being “the coolest company in Russia”, with more than 18,000 employees, a value of 31 billion US dollars and a growing number of users in the rest of the world. “Then President Vladimir V. Putin invaded Ukraine.”

Yandex is often described as the Russian counterpart to Google, also because the two companies are almost the same age and have emerged in a similar way. In 2000, Arkady Volozh, Elena Kolmanovskaya, and Ilya Segalovich launched Yandex, around the same time Sergei Brin and Larry Page invented Google. The Americans also wanted to swallow up the Russian competitor soon, but Yandex rejected a takeover – they wanted to remain independent. The noughties were the time of unbridled growth for Yandex.

In colorful offices with flat hierarchies, the company developed into the zampano of the Russian market. Unlike Google, Yandex soon left the path of being a pure search engine. The site developed into the gateway to the Internet for Russians. With the app you can order a taxi and also food, the platform offers news and culture, videos, music, cloud services and streaming. Yandex combines everything that Google, Uber, Amazon, Spotify and many more offer on one platform – this not only accumulated an enormous wealth of data, but also a 60 percent market share.

See also  Showing off all her charms, Julia Fox was sent to check the psyche

“Dangerous liaison with the Kremlin”

However, the beginning of the war was actually the turning point for the company, which had been spoiled by success up to that point. Not only the management gradually left the boat. Yandex was suspended from trading on the US stock exchange NASDAQ, and the stock fell by 75 percent. Western sanctions caused foreign partners to flee. In fact, countless employees have also fled: around a quarter of the entire workforce has left Russia since February.

“Today the company is in a deep crisis into which it maneuvered itself,” according to the Swiss online magazine Republik.ch. Yandex had entered into “a dangerous liaison with the Kremlin”. Protection against Western competition was hoped for, and there was also political opportunism “to be left alone. The bill didn’t add up,” says Republik.ch.

A former head of the news division Yandex News reported that the first repressions by the Kremlin crept in in the late 2000s. Shortly before the war in Georgia in 2008, he was visited for the first time by Kremlin officials. They demanded that the news on the platform be approved before publication, and they also demanded access to the Yandex News interface.

In the years that followed, the Kremlin repeatedly tried to rein in Yandex. Sometimes the tech giant resisted, sometimes it buckled. The unspoken deal with the Kremlin, which critics accuse Yandex of, was: The state creates favorable framework conditions for the company without worrying about competition watchdogs, which – unlike in the EU, for example – do not keep an eye on the de facto monopoly. The platform only brings those messages that play into Putin’s hands.

In 2016, the Duma also passed strict internet laws requiring Kremlin officials to monitor the internet. For example, news offers that have more than a million readers per day may only display “licensed” media. Internet companies were obliged to store the data and messages of their users for a period of six months and, if necessary, to hand them over to the “relevant government authorities”. The laws are so strict that even the Communist Party (KP) protested against them at the time.

After the invasion of Ukraine, Putin once again intensified the stance against freedom of expression and signed more laws against alleged “fake news” about the Russian armed forces and state organs abroad. The penalties range up to imprisonment.

For years, Russian Internet giant Yandex has tried to be as apolitical as possible. Russia’s invasion of Ukraine rapidly exposed the limits of this approach.https://t.co/dK0erfngrW

Today, Sergei Kiriyenko, the deputy chief of staff of the Russian government, “curates” the news published on Yandex. According to research by Republik.ch, Putin himself has the five most important Yandex news items laid out on his desk every day. It’s almost impossible to avoid checking the news, as tech entrepreneur Tonia Samsonova explained to the Russian exile medium Meduza: Samsonova had sold her own start-up to Yandex years ago and continued to run it.

When Putin put the country’s nuclear forces on high alert a few days after the invasion of Ukraine, nothing was found on Yandex News except for a report from the state news agency TASS that the army’s “deterrent forces” had been put on high alert. No talk of nuclear weapons. She texted those responsible at Yandex to inform people about this, and was promptly rebuffed. Samsonova then wrote a letter of resignation and published it on Instagram.

On WhatsApp she wrote to her father in Moscow how she told Meduza. “My father didn’t seem as worried as I was. He didn’t know that Russian troops were bombing Ukraine; he didn’t think anything was happening at all,” Samsonova said. “The TASS headline, which was among the top five news items on the Yandex website, gave no indication that there was a threat of nuclear war. I realized there was nothing I could do to convince my dad if that’s his news source.”

There is no “war”

The word “war” does not exist in the Yandex bubble, nor does it exist in the Kremlin diction. There are no reports of alleged Russian war crimes, not a word of the shelling of kindergartens and hospitals in Ukraine. Some of those former bosses who went abroad and left Yandex repeatedly tried to wake up their former employees. Former manager Lew Gerschenson regularly posts critical articles, addressing Yandex directly.

On March 1, Gerschenson wrote on Facebook: “Today is the sixth day of the war between Russia and Ukraine, during which Kharkiv residential areas, hostels and maternity hospitals are being shelled with rockets and volley fire systems. Eleven dead, dozens injured. Today is the sixth day that at least 30 million Russian users see on the Yandex main page that there is no war, there are not thousands of dead Russian soldiers, there are not dozens of civilians killed by Russian bombing, there are not dozens of prisoners, there is not much destruction in different Ukrainian cities.” The fact that “a significant part of the population of Russia may believe that there is no war is the basis and the driving force of this war. Yandex today is a key element in hiding information about the war.”

Every day with such “news” costs lives, according to Gerschenson. According to Meduza, Gerschenson’s intervention was hotly debated in the Yandex offices. However, managing director Elena Bunina explained to her employees that resistance to the Kremlin was hopeless: “If we remove the messages, we will reap ten minutes of fame. Nothing will change on a global level, and when the ten minutes are up, everything will go back to the way it was before, only Yandex will be gone,” she quoted Meduza as saying.

But in April even Bunina resigned and moved to Israel. “Yandex used to be like an island of freedom in Russia, and I don’t know how that’s going to continue,” Bunina said, according to the New York Times.

After Russia banned western news competition, Yandex user numbers continued to skyrocket. After leaving Apple, Microsoft and others from Russia, Yandex dominates the market. Nevertheless, the company is doing miserably: The Western sanctions not only hit some of those responsible directly in the company, they also reduced the Yandex value by billions overnight. Branches and business partners abroad closed their doors, future prospects are blurred. According to Republik.ch, almost 2,800 open Yandex positions were advertised at the end of June.

Yandex recently decided to sell its news division and blogging platform Yandex Zen. The buyer is VK, the Russian equivalent of Facebook, run by Vladimir Kiriyenko, the son of the government’s deputy chief of staff. It was said that the future focus would be on technological products. The news of the sale is said to have led to a collective sigh of relief in the company.

The sale shouldn’t bother the Kremlin either, especially since it should make it easier to control news content on VK. In addition, this month the Kremlin fined Google a total of $380 million. At the same time, Russia has been tinkering with its own Internet for years: With “Runet”, the country is to be virtually digitally encapsulated, similar to what is already the case in North Korea with “Kwangmyong”. How things will continue with Yandex is open.

Ilya Krasilshchik, who left Yandex after the release of pictures from Bucha, told the New York Times that the gap between satisfying the needs of the Kremlin and those of Western partners is insurmountable. “You have to find a way between these two, but that’s impossible,” Krazilshchik said. “In any other situation, it would be a perfect company like Google or any other tech company. But Yandex has the problem of being a Russian company.”