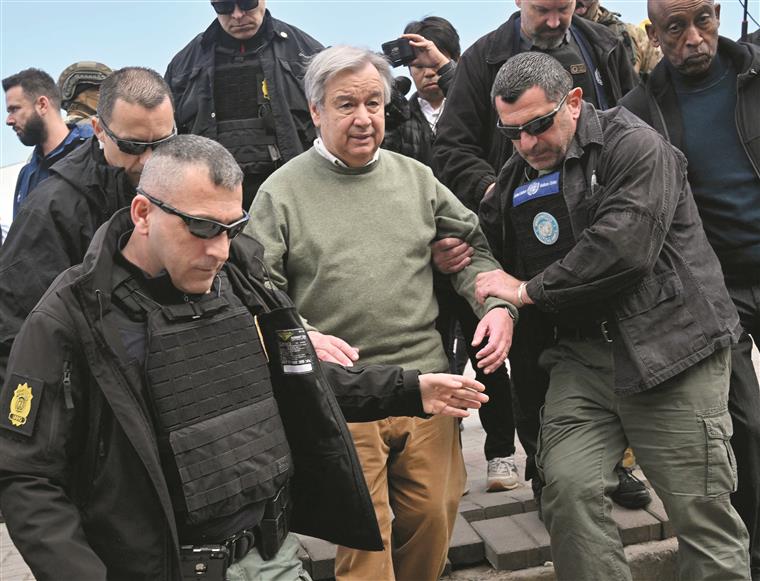 
Vladimir Putin wanted to humiliate the United Nations, bombing Kiev in the midst of a visit by its secretary-general, António Guterres, accused President Volodymyr Zelensky. The Kremlin’s message seemed clear: there is nothing this institution, born of World War II, promising that future generations would not suffer from the scourge of war, can do to stop Russian power. The dream of a world order governed by consensus and international law may have been dealt a death blow.

“Immediately after the end of our conversation in Kiev, Russian missiles flew into the city. Five missiles”, stressed the President of Ukraine, on Thursday, before the cameras, after his meeting with Guterres. “This says a lot about Russia’s true attitude to global institutions. On Russian leadership’s efforts to humiliate the UN and everything the organization stands for».

The Kremlin, which has already admitted to having hit Kiev on Thursday, assured that it used long-range, high-precision missiles, targeting military installations, namely a missile factory. However, it will be difficult to explain how among the dead was Vira Hyrych, a 55-year-old Ukrainian journalist, who worked for Radio Free Europe, created by the US in Cold War times, to broadcast news beyond the Iron Curtain. . The journalist’s body was discovered the morning after the attack, among the rubble of her apartment, which had been hit by Russian missiles.

“We have lost a dear colleague who will be remembered for her professionalism and dedication to our mission,” announced Jamie Fly, President of Radio Free Europe. “We are shocked and furious at the senseless nature of her death, in her home, in a country and in a city she loved,” he continued. “Her memory will inspire our work in Ukraine.”

Guterres arrived in Kiev amid harsh criticism of his own performance during this war, but also against the organization he heads. His delay in going to the field, or the choice of the Kremlin as his first destination, even before going to visit Zelensky, created a stir, as well as the difficulty of the UN in even taking on the role of mediator, ending up overtaken by the Turkish regime of Recep Tayyip Erdogan , which received both parties in Istanbul.

However, many observers point out that even if Guterres had had another performance, the United Nations would still have difficulty acting in these circumstances. “It is wrong to think of inaction as something completely new,” he wrote in Time magazine. “Indeed, the exceptional moments in UN history have been when consensus was reached among the P5 – the states officially recognized as nuclear – in order to uphold the international order when one of them is involved.”

The problem is structural. Some voices in the West were still raised, calling for the UN to send peacekeepers to Ukraine to protect civilians’ access to humanitarian aid and to try to maintain some level of respect for their basic rights. Of course, this has not happened, nor is it expected that this will be possible. The deployment of peace missions is the responsibility of the Security Council, of which Russia – like the US, China, UK and France – is a permanent member, with the right of veto.

“The Security Council failed to do what it could to prevent and end this war,” admitted Guterres himself, alongside Zelensky. “I know that words of solidarity are not enough”, acknowledged the secretary-general, who, two months after the start of the invasion, wants to focus “on the needs on the ground and on scaling operations”.

It is a paralysis that threatens to doom the United Nations, in relation to which parallels are increasingly drawn with the League of Nations, the first attempt to create a rules-based world order, predecessor of the UN and dissolved after having failed to prevent the II World War.

The Russian invasion of Ukraine «is not just another war. This conflict that shakes the system, that breaks the system, with enormous consequences”, warned Mark Malloch-Brown, former deputy secretary general of the UN, president of Open Society Foundations, quoted by Radio Free Europe. Even Russia’s expulsion from the UN – which required it not to veto its expulsion in the Security Council – might not solve the problem, added Richard Gowan of the International Crisis Group.

“Most US and other diplomats recognize that pushing Russia out of the tent in the long run would be more destructive than positive,” explained Gowan. «Just like when Japan, Germany and Italy knocked on the door of the League of Nations».

The problem is that the decadence of the UN is not new. And it is not surprising that so many developing countries are hesitant to close ranks against Russia, especially those that have suffered from Washington’s unipolar governance of the world, lamented Nathan Gardels, director of Noema.

“When Putin scoffs at the accusation that his invasion was illegal, his mocking smile is perfectly understood by all those who opposed the US invasion of Iraq without UN approval,” wrote Gardels. “And the more the world becomes cynical about the possibility of establishing a ‘rules-based global order’, which would apply equally to great powers as to all other nations, the more the way is open for these powers to act. with impunity”.