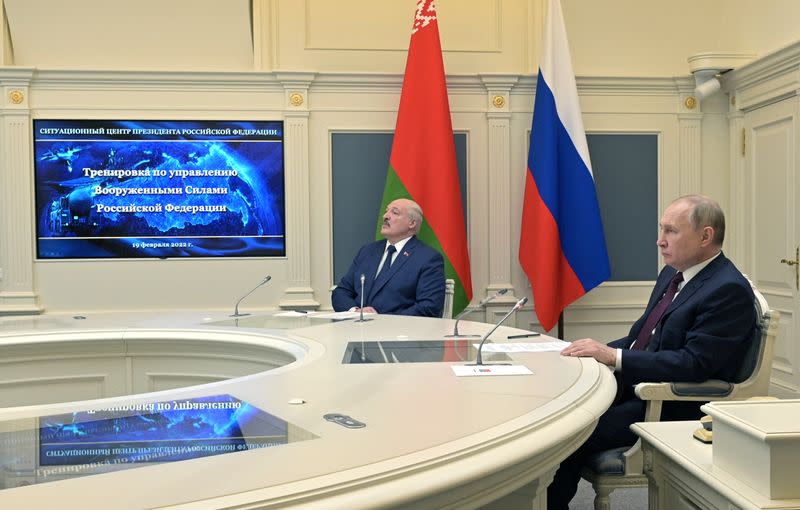 With Western fears of war mounting, foreign ministers from the G7 group of wealthy nations said they had seen no evidence that Russia was reducing its military activity in the area and remained “gravely concerned” about the situation.

After Kiev and Moscow exchanged accusations about new bombing near the border, France and Germany urged some or all of their citizens in Ukraine to leave. US Defense Secretary Lloyd Austin said Russian forces were starting to “spread out and get closer” to the border.

“We hope that he (Putin) moves away from being on the brink of conflict,” Austin told a news conference in Lithuania, saying an invasion of Ukraine was not inevitable.

Russia ordered the military buildup while demanding NATO prevent Ukraine from joining the alliance, but says Western warnings that it plans to invade Ukraine are hysterical and dangerous. Moscow says it is withdrawing, but Washington and its allies say the buildup is mounting.

Washington and NATO say Moscow’s main demands are impossible, but fears are growing in Ukraine about Putin’s plans.

Expressing frustration at a security conference in Munich, Ukrainian President Volodymyr Zelenskiy said the global security architecture was “almost broken.” He urged the permanent members of the UN Security Council, Germany and Turkey to meet to work out new security guarantees for his country.

See also  What is hydrocution syndrome? Knowing it can save lives

“The rules that the world agreed to decades ago don’t work anymore,” Zelenskiy said. “They don’t keep up with new threats. They’re not effective at overcoming them. This is cough syrup when you need a coronavirus vaccine.”

World Bank President David Malpass told Zelenskiy at a meeting on Saturday that the bank was preparing funds for Ukraine of up to $350 million, for consideration by its board at the end of March, to support reforms there.

The Kremlin said Russia had successfully tested cruise and hypersonic missiles at sea during military exercises of the strategic nuclear forces.

Putin watched the exercises on screens with Belarusian leader Alexander Lukashenko from what the Kremlin called a “situation center.”

US President Joe Biden said on Friday he believed Putin would invade Ukraine in the coming days and Austin said the exercises were raising concerns around the world.

The G7 foreign ministers called on Russia to choose the path of diplomacy and de-escalate tensions.

“As a first step, we expect Russia to implement the announced reduction of its military activities along Ukraine’s borders. We have seen no evidence of this reduction,” the foreign ministers said in a statement.

The nuclear drills follow moves by Russia’s armed forces over the past four months that have included a build-up of troops, estimated by the West at 150,000 or more, in north, east and south Ukraine.

New helicopters and a battle group of tanks, armored personnel carriers and support equipment have been moved to sites in Russia near the border, according to US-based Maxar Technologies, which tracks developments with satellite imagery.

“Ignoring Russia’s legitimate rights in this area negatively affects stability not only on the European continent, but also in the world,” Russian Foreign Minister Sergei Lavrov told the French foreign minister by phone.

Also on Saturday, a NATO official said the alliance moved personnel from Kiev to the western city of Lviv and to Brussels for security reasons. The United States and many other countries have sent diplomats to Lviv.

(By Reuters Editorial Edited in Spanish by Juana Casas)