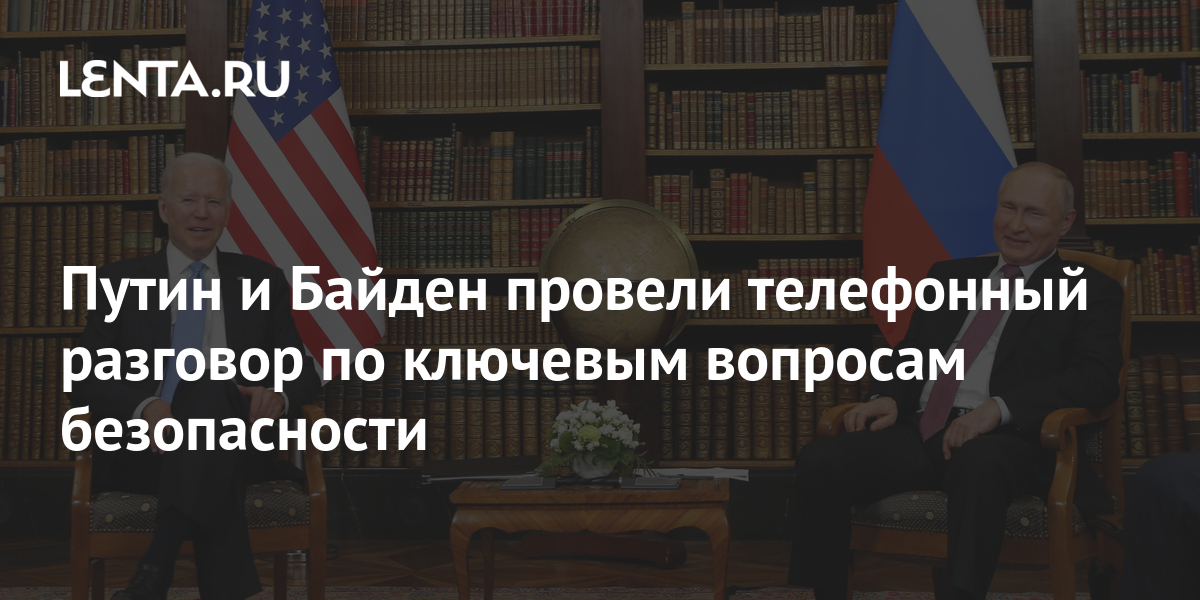 US and Russian Presidents Joe Biden and Vladimir Putin had a telephone conversation on key security issues. The parties agreed to continue the dialogue, on the whole, the American colleague reacted seriously and logically to the point of view of the Russian leader, and he, in turn, stressed several times the main provisions that Moscow adheres to. This was announced by the aide to the President of Russia Yuri Ushakov, RIA Novosti reports.

According to him, the result is important for Moscow in the form of ensuring the guaranteed security of the country, formalized legally, which it will strive for. He added that Washington understands Russia’s concerns, although it has its own. The heads of state intend to push the negotiations, which will be conducted by interdepartmental teams in Geneva.

Our president emphasized that in this rather difficult situation we would behave as the United States would behave if offensive weapons were deployed near American borders. Our president tried in every possible way to make several visits so that this key idea of ​​ours reached Biden well.

Yuri UshakovAssistant to the President of Russia

On December 17, the Russian Foreign Ministry published draft agreements between Moscow and NATO and the United States on security guarantees in Europe. The document says that Washington should not create military bases in the territories of the former USSR countries that are not NATO members.

Putin and Biden touched upon all the main topics

The conversation between Putin and Biden began at 15.35 Washington time (23.35 Moscow time) on Thursday, December 30, and ended at 16.25 (00.25 Moscow time Friday, December 31), the White House said. In total, the dialogue lasted 50 minutes. According to Ushakov, the parties “had a substantive discussion”, the main topics were touched upon.

The talks on guarantees will take place along three tracks, in Geneva on January 9-10 with the participation of Russia and the United States, in Vienna with the participation of Moscow and the OSCE, negotiations between Russia and NATO will start on January 13, the Russian presidential aide added. The heads of state will follow their progress and give instructions to the negotiating teams.

The date of the next conversation between Putin and Biden is still unknown. Perhaps they will be able to talk in January, taking into account the Geneva talks. According to Ushakov, everything will depend on the situation. If this is required after January 10, it is possible that the contact will be immediately organized.

Biden, in turn, assured Putin that the United States was not going to deploy offensive shock weapons in Ukraine, Ushakov added. He recalled that the Russian leader considers this to be one of the key points, this point is also indicated in the documents that were transferred to the American side.

An administration official in Washington said the United States continues to closely monitor the movements and concentrations of Russian troops on the Ukrainian border. The official added that Biden discussed with Putin the need for de-escalation and again warned his colleague about the consequences for Russia in the event of an invasion of Ukraine.

According to him, the American leader said that the United States will make efforts to strengthen NATO forces and provide additional assistance to Kiev, focusing on containing Russia in this matter.

Ushakov said that Biden did not give a specific assessment of Moscow’s actions, which may entail sanctions. According to him, the US President mentioned some large-scale restrictions, this issue was discussed in a previous telephone conversation on December 7, and then Putin called the sanctions a major mistake that could lead to a break in relations between the countries. The presidential aide also clarified what is meant by the break in relations.

This does not imply anything, because we do not know what “large-scale sanctions” are, but we know that this will be a colossal mistake that can lead to the most serious consequences.

Yuri UshakovAssistant to the President of Russia

On December 24, US Vice President Kamala Harris threatened Russia with new, “strongest” sanctions, which have not yet taken place, due to the situation in Ukraine. In an interview with CBS television, answering the question of whether there will be a “hot war in Europe” in the next few weeks, Harris said that Washington is informing Russia that it should not encroach on Ukraine’s sovereignty.

A senior US administration official said the talks between Biden and Putin were serious and substantive, and the contact was appropriate in light of diplomatic talks expected in January.

The tone of the conversation was serious and substantive. The primary purpose of the call was, in fact, to set the tone for diplomatic engagement.

The official added that following the talks, the United States will hold consultations with allies on the principle of “nothing about you without you” on issues that are of utmost concern to partners. According to him, Putin took this with understanding.

White House spokeswoman Jen Psaki said Biden indicated to Putin that Washington is ready to respond decisively in the event of a Russian invasion of Ukraine. Biden expressed support for the bilateral strategic stability dialogue, which will begin in 2022, she said.

The Kremlin press service said that Biden emphasized the special responsibility of the United States and Russia for ensuring strategic stability not only in Europe, but throughout the world. The main topic of the conversation was the implementation of agreements on the provision of legal guarantees for the security of Russia.

In this context, Joseph Biden emphasized the special responsibility of Russia and the United States for ensuring stability in Europe and the world as a whole, as well as the fact that Washington has no intentions to deploy offensive strike weapons on the territory of Ukraine.

The first deputy head of the international committee of the Federation Council, Vladimir Dzhabarov, believes that the second conversation in a month between the Russian and American leaders may indicate a “synchronization of clocks” before the negotiations of the delegations. According to the senator, this indicates a serious attitude of Washington to Moscow’s proposals on security guarantees.

The fact that the second conversation between the presidents of Russia and the United States took place over the past month suggests that Washington took our proposals on security guarantees very seriously.

According to Dzhabarov, Western politicians commented on the talks between the presidents, but both Biden and the “heavyweights” – NATO, Germany, France, Great Britain tried to avoid sensitive topics, while those who do not decide anything talked a lot, in particular about that Russia should not interfere in the advancement of the North Atlantic Alliance.