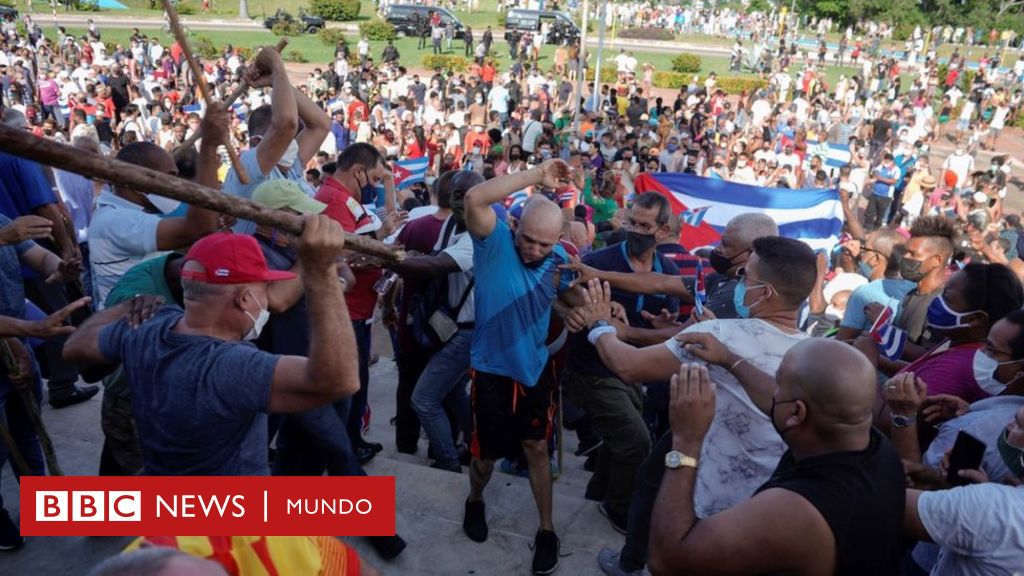 Protests in Cuba: the harsh sentences on the island against the protesters of July 11

He is 21 years old and has been sentenced to spend more time than he has lived in a Cuban jail.

Walnier Luis Aguilar Rivera, a young man living in the La Güinera neighborhood, one of the most populous and poorest in Havana, was sentenced this month to 23 years in prison for participating in the massive protests of July 11.

“We are devastated. My son has a mental retardation product of an injury and in the trial they did not even take that into account. He went out to protest like all the people and now they want to put him more years than his own age. He is 21 years old and he They have scored 23, “Luis Aguilar, the young man’s father, told BBC Mundo.

According to her testimony, her son was detained a few days after the demonstrations and the family could not see him again until three months later.

“We were suffering without knowing about him. Now they have him in the Combinado del Este, which is a maximum security prison and he is just a 21-year-old boy who has psychiatric problems,” he adds.

In recent weeks, about twenty people have received sentences of between 12 and 30 years in prison for participating in the J11 demonstrations, some of which are twice the age of the protesters.

According to data collected by Justice 11J, an independent group on politically motivated detentions created in the aftermath of the protests, about 150 people have been brought to trial in the past two weeks with causes associated with the protests.

Most of them have been accused of the crime of “sedition”, one of the most delicate charges in the Cuban penal code and which carries sentences greater than those received by a murderer or a thief.

See also  The title will not be eliminated from Madrid ... Atletico snatch a victory in La Liga

“It is an abuse, a disproportionate sentence. And we are tied hand and foot because there is no one to turn to. The prosecution asked my son for 22 years and they gave him 23. Another from my neighborhood, 18 years old, was asked for 15 and they put him 18, the same age, “says Aguilar.

The Cuban government and the island’s official media have not referred to the sentences or offered information on these trials.

However, in previous months, the authorities assured that what happened in July were “riots” “financed from the US” and they have described the detainees as “vandals” “criminals”, “rebels” or “mercenaries” who had a “totally vulgar, indecent behavior”.

This month’s trials are in addition to others held in July and October, in which sentences ranged from fines to 14 years in jail.

“They have asked my son for eight years and the only thing he did was make a direct of the protests,” Mabel, mother of Yoan de la Cruz, the young man who transmitted the beginning of the demonstrations in San Antonio de los Baños on Facebook.

“He was tried this month, but we are still awaiting the sentence. Someone can imagine that a human being is asked for eight years in prison just for transmitting a protest,” he adds.

However, the heaviest penalties have fallen on a group of residents of La Güinera, the Aguilar neighborhood and where the only official death from the protests was also reported.

A growing number of prisonerss

Counts of Justicia 11J and the independent legal platform Cubalex indicate that, currently, more than 700 people remain in jail after participating in the July protests and about 500 were released pending trial or after receiving minor sanctions or fines.

“So far we have documented a total of 205 ordinary trials,” Salomé García, one of those responsible for Justicia 11J, tells BBC Mundo.

Of the total number of detainees, 14 are minors, according to data from activists.

Some of them, like Kendry Miranda Cárdenas, 17, have a prosecutor’s request for 20 years of deprivation of liberty and others like Brayan Piloto, 16, request a sentence equal to his age, according to his relatives.

BBC Mundo could not independently confirm these data and the Cuban authorities do not offer official information in this regard.

This uncertainty has led international organizations, such as Unicef, to ask the island’s government for greater transparency.

“UNICEF is concerned about the alleged cases of detentions of children reported in Cuba. We call on the Cuban authorities to provide additional verified information on children allegedly in this situation,” the organization said on Twitter last month.

The trials against the J11 protesters put an end to a turbulent year on the Caribbean island where, in the last 60 years, anti-government protests and expressions of dissent have never reached levels like those seen in 2021.

The pandemic had a profound impact on the island’s economic and social life this year, joined by rising inflation, blackouts and shortages of food, medicine and basic goods.

One of the engines of the Cuban economy, tourism, was practically paralyzed for months due to the pandemic.

In early 2021, the government proposed a new package of economic reforms that, while increasing wages, sent prices skyrocketing.

Economists such as Pavel Vidal, from the Javeriana University of Cali, estimate that they could increase product costs by up to 900%.

And in June, the government decided to “temporarily” stop accepting dollars in cash, the main currency Cubans receive in remittances, a measure that was seen by economists as the most restrictive imposed on the US currency since it was penalized during the government. by Fidel Castro.

From shortage to the streets

The economic situation, together with the coronavirus crisis and access to the internet and social networks, prepared the breeding ground to make 2021 a peculiar year.

The moment that marked the year took place on the morning of July 11, when hundreds of people took to the streets of San Antonio de los Baños and made the rest of the island join in a few hours like a domino effect.

More than 1,000 people have since been detained in what human rights groups called a “hunt for protesters.”

As a result of the protest, a group created then, Archipelago, called a new protest for November, which led the authorities to ban the march and to carry out a broad military deployment on the day it was scheduled.

New trials and new sentences are expected in early 2022, as uncertainty multiplies for those who have already been convicted. And for their relatives.

“What a Christmas and what end of the year they are giving us. Nobody knows the pain we are going through. We no longer think about the New Year, but about the years that they are putting our children in jail,” says Mabel.