The resonant verdict of the country’s highest court was announced on October 7, and the case was considered on the initiative of Moravetsky. The Constitutional Court ruled that four provisions of the Treaty on the European Union contradict the Polish Constitution and should not override it. These provisions refer to respect for human dignity, freedom, democracy, the rule of law and equality, as well as the jurisdiction of the European Court of Justice. According to Polish lawyers, these clauses of the treaty create the possibility that European courts may overrule the Polish Constitution, including when they question the legality of the appointment of judges in the country.

Judicial restructuring: why Poles are protesting against judicial reform

The strife around the Polish judicial reform has been dragging on since 2017, when the ruling Law and Justice party initiated a judicial renewal. In Brussels, the reform has been repeatedly criticized, pointing out that it leads to the establishment of political control over the courts and deprives Polish citizens, who are also EU citizens, the right to an independent judicial process. The European Court of Justice in Luxembourg in July this year ruled that the reform initiated by Warsaw undermines the independence of judges and is incompatible with EU law.

French Foreign Minister Clement Bon said the decision of the Polish court was an attack on the EU. “The Polish authorities do not respect the values ​​and fundamental rules of the union,” he said and threatened Warsaw with a refusal to allocate EU funds to restore the national economy after the pandemic. France and Germany issued a joint statement in which they recalled that EU membership “goes hand in hand with full and unconditional adherence to common values ​​and rules.” Poland is a key member of the EU, and any member of the association is obliged to abide by these rules, and this obligation is not moral, but legal in nature, stressed the foreign ministers of the two countries Jean-Yves Le Drian and Heiko Maas.

Hungary became the only EU country to welcome Poland’s decision. The corresponding government decree was signed by Prime Minister Viktor Orban. It says that the Polish court was forced to consider the rule of law due to the ineffectiveness of EU institutions, which ignore the principle of delegation of powers. From the point of view of the Hungarian authorities, the priority of EU law should be applied only in those areas in which the association has competence, and also the national identity of the member states must be respected. According to Budapest, national law enforcement agencies, including constitutional courts, have the right to check the scope and limits of the EU’s powers. 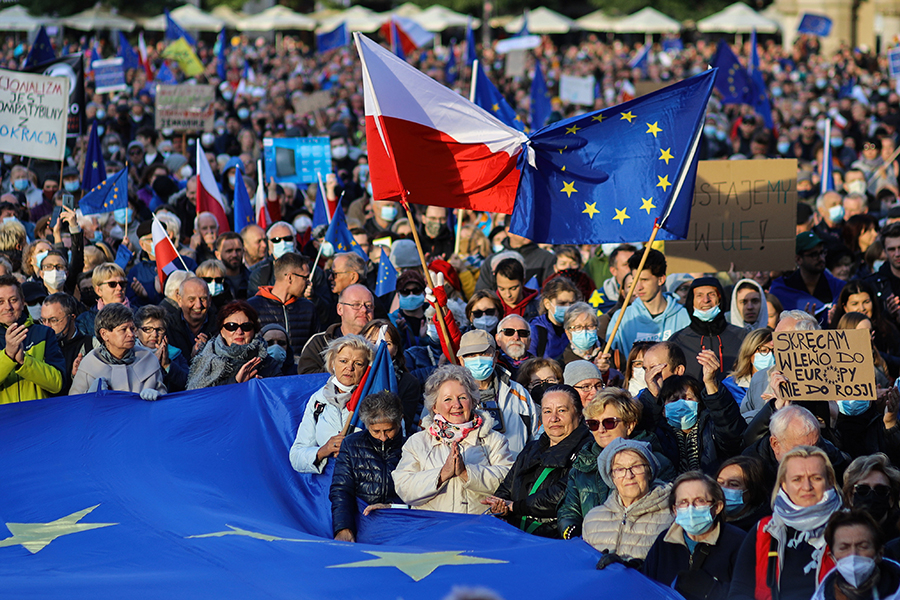 Between court and financial pressure

According to Politico, the European Commission has two options for influencing Warsaw. The first is to initiate legal proceedings. For Poland, this development of events will not be new: the European Commission has already resorted to such a step before, as well as to Hungary, including for the infringement of the rights of minorities. If the decision is positive, Poland may be subject to penalties. Penalty interest will be charged daily until the country complies with the court’s decision. In case of refusal to pay fines, money will be withdrawn from other financial programs.

The second option is to suspend funding from the EU. First of all, we are talking about the € 750 billion Recovery and Resilience Fund, which was created to restore the economies of countries affected by the pandemic. To receive funds from the fund, EU members had to present a plan for their spending and approve it in Brussels. Poland approved such a plan in early May, claiming € 23 billion in EU grants and over € 34 billion in loans. The first tranche in the amount of 13% of the requested amount was supposed to arrive at the beginning of August, but the EU postponed the procedure for considering Warsaw’s application. European Commissioner for Economic Affairs Paolo Gentiloni attributed the delay precisely to differences over the rule of law.

Theoretically, there is a possibility that Poland could be deprived of the right to vote in the EU, but this requires the consent of all 27 members of the association, which is hardly possible given the position of Hungary.

Polish political scientist Anthony Dudek believes that the most likely scenario is the conservation of the current situation. Warsaw will continue to declare the legitimacy of the decision of the Constitutional Court and will not recognize the decisions of the European Court that are unfavorable for the country. The allocation of funds from the Recovery Fund remains in question. “Without this money, Poland, of course, will not go bankrupt. But if Brussels stands its ground and does not allocate these funds, it will be a huge blow to the image of Law and Justice, which has so far convinced the Poles that it is pursuing a tough policy towards the EU and that the EU is inferior to Warsaw, ”commented Dudek Bi- bc.

If the Polish authorities adhere to their strategy, the European Union can deprive the country of financial assistance from the Recovery Fund, and this is a rather powerful financial instrument, says Irina Kobrinskaya, a leading researcher at the Institute of World Economy and International Relations of the Russian Academy of Sciences. The idea of ​​Polexit, according to the expert, is more speculation. If the issue of leaving the EU had been raised, the decision would have been made in a referendum, as was the case in Great Britain in 2016, and the majority of Poles would have voted against, Kobrinskaya is sure. “The situation in Poland is similar to the American one, where society and elites are largely divided: power stands behind Law and Justice, but liberal forces are gaining popularity again. Protests are expressions of support for these alternative forces, ”she explains. According to Kobrinskaya, the protests are unlikely to lead to early parliamentary elections, and the next one is scheduled for 2023.