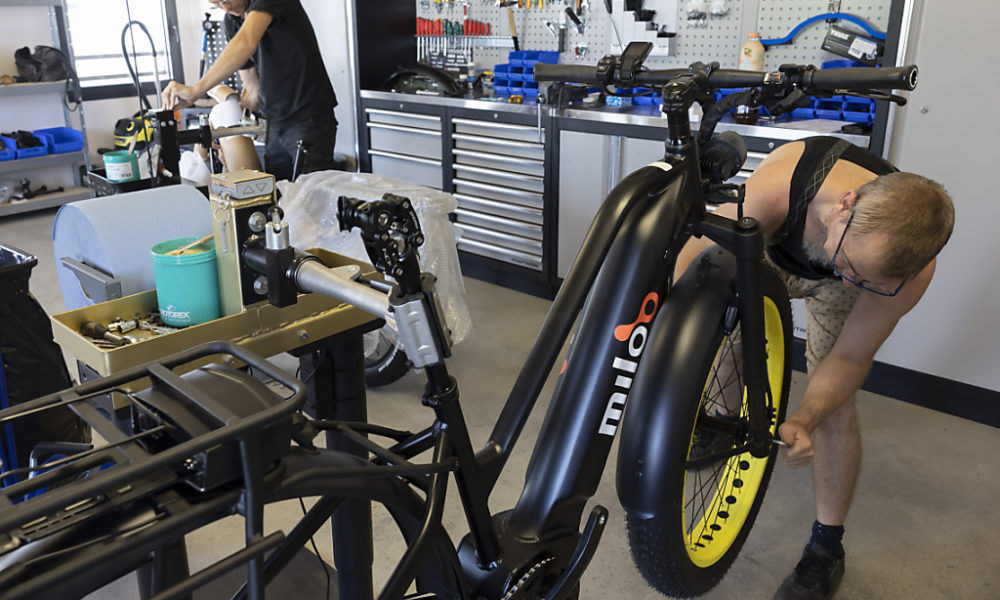 Production and distribution: the winning bet of a bicycle manufacturer

Miloo, a young Geneva company that manufactures electric bicycles, has experienced strong growth since its inception. Despite the shortage of parts in this sector, she, who masters the production and distribution of her bikes, manages to deliver them quickly.

Two mechanics are busy this Monday morning in July around still naked executives, in the new premises of the company located in the industrial zone of Meyrin (GE). In two to three hours, the bikes will be assembled. The two specialists will look for the necessary parts in the stocks stored in the adjacent room.

“The stock of equipment built up two years earlier is sufficient to deliver a new bike in less than three weeks,” says Anna Bory, co-founder of Miloo. Since it assembles its bikes and distributes them in its stores in Geneva, Lausanne and Zurich, the company does not need to go through a “wish list” with manufacturers, underlines Ms. Bory.

“Controlling the chain upstream and downstream: this is Miloo’s chance,” adds the co-founder. If the design and assembly of Miloo bicycles is done in Switzerland, the same is not true for the origin of the parts “It is impossible to find this type of material in the country”, notes the co-founder.

Half of the parts come from the United States (transmission), a quarter from Europe (saddles and electronics) and the rest from Asia (batteries, brakes and frames). With the increase in transport costs, Miloo tries to find new, closer suppliers in Europe. The uncertainty generated by the war in Ukraine also pushes to favor proximity.

See also  Who Said An Electric Mustang Wouldn't Succeed? Ford will triple the production of the Mach-E - News - Hybrids and Electric

Another type of shortage worries the co-founder of Miloo: the lack of qualified personnel. The company, which has grown from three employees in 2020 to about fifteen currently, needs cycle mechanics, a hard-to-find workforce. Only 16 cycle mechanic CFCs were issued in French-speaking Switzerland in 2020, including only one in Geneva, according to orientation.ch.

Anna Bory hopes to be able to quickly train apprentices. The company, which works with external engineers to develop its new models, also wants to integrate a research and development department within it.

Miloo, which benefited from a fundraising of 2.5 million francs last March, has sold nearly 2,000 bicycles since the first sales in March 2020, including 130 in the last five weeks. “Sales have tripled in 2022”, rejoices Anny Bory.

Founded with Daniel van den Berg, the company is riding the wave of electric urban mobility. However, it dropped the development of electric scooters which “was not going in the right direction”. Its objective is to make motorists switch to electric bikes.

To succeed in this modal transfer, Miloo relies on safety and comfort by offering models with very wide frames and wheels. Miloo’s electric bikes, described as “e-SUV-bikes”, are thus larger machines than ordinary bicycles. Fully customizable, they don’t go unnoticed, like this all-pink Miloo that you regularly come across downtown.

This article has been published automatically. Source: ats