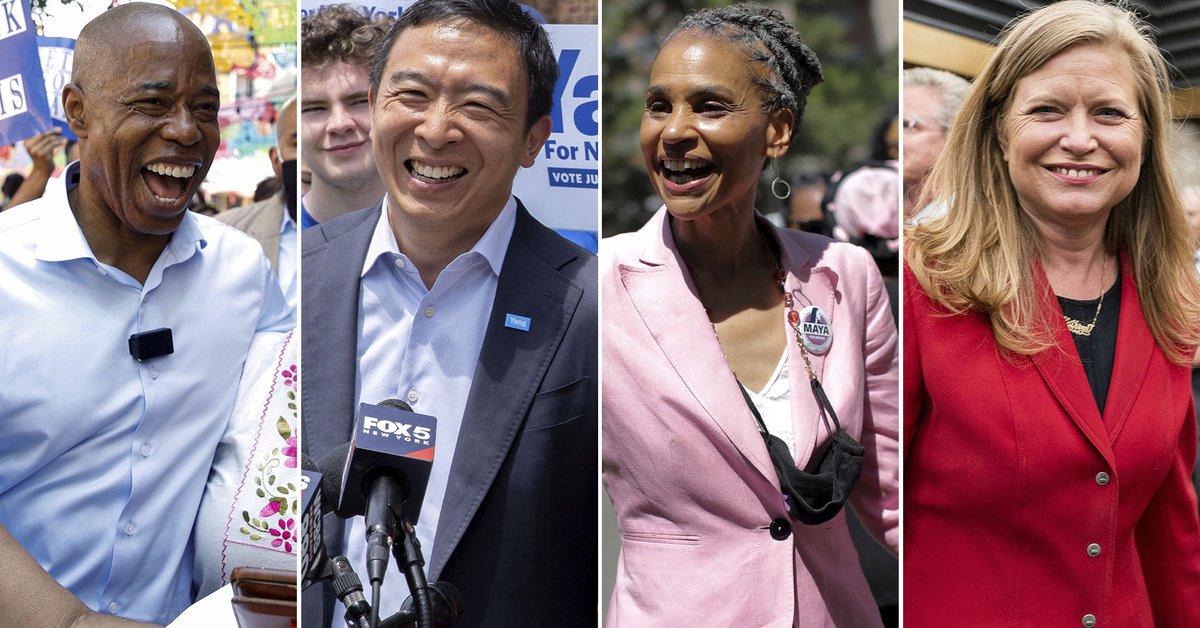 Registered Democrats must choose from a diverse group of 13 candidates vying for “the second most difficult job” in the country after that of president, as the office of mayor of New York is known.

New York will celebrate this Tuesday close primary elections to elect the candidates of the two main parties for mayor and other municipal offices, which In the Democratic Party they are lived as a true election since its dominance in the area is such that all forecasts point to the candidate chosen by this political group being the next mayor of the Big Apple.

Surveys highlight how main favorite the current president of the borough of Brooklyn, Eric Adams, although closely followed by three other contenders: the former director of the Department of Sanitation Kathryn García, the former presidential candidate Andrew Yang Y Maya Wiley, former advisor to the current mayor, Bill de Blasio.

The first three represent the more moderate wing within the Democratic Party, while Wiley, a black lawyer specializing in human rights, has the backing of the most progressive voiceslike Congresswoman Alexandria Ocasio-Cortez and Senator Elizabeth Warren.

Other well-positioned candidates with far fewer options, such as City Controller Scott Stringer and activist Dianne Morales, are vying for votes on the left for Wiley.

The campaign is atypical for the multiple-choice system, in which voters can choose up to five candidates defining the order of preference.

Eric Adams, a former police officer, has been able to galvanize the growing concern of New Yorkers in the face of the rampant increase in insecurity and shootings to present himself as the best-equipped candidate to stop crime.

Beyond security, education and the return to face-to-face classes, economic recovery, employment and housing have been the topics most addressed by the candidates.

For their part, Yang and Garcia, who share Adams’ vision of strengthening the police force, joined their political campaigns this weekend in a final attempt to steal the most votes from the favorite.

In the Republican arena, the campaign has not gained the same intensity or notoriety as on the Democratic side, neither because of the media noise nor because of the number of candidates. Only two opponents will face tomorrow at the polls, Fernando Mateo, director and founder of the New York Taxi Drivers Federation, and Curtis Silwa, the father of the Guardian Angels urban patrols.

And it is that the Democratic tradition of the New York electorate presages that in the mayoral elections the Democratic candidate will prevail if there is no surprise.

A new electoral trend that is gaining weight in the United States takes its most important test in the elections for mayor of New York: the electorate will not vote only for their preferred candidate in Tuesday’s primaries, but will vote for up to five candidates, in their order of preference.

The system is based on the simple notion that democracy works best if people don’t have to stake everything on one chip. The voter selects several candidates in order of preference and if their preferred figure does not receive enough votes to be elected, they can still influence the winner of the contest.

It is a complex system, which makes it difficult to predict a winner and in which it may take longer to determine the winner.

Through this initiative, the person elected the most times as the first choice may not be the winner if the second most supported candidate is designated on many more occasions as the second choice of the voters.

In several joint events, quasi-allies Yang and Garcia asked Democratic Party voters to choose the businessman as their first choice and the moderate candidate second. This strategy has not been to the liking of Adams (African American), who has tried to play the racist card by accusing his two opponents of Asian and European origins, respectively, of having devised their strategy to prevent “a person of color from reaching the mayor’s office ”.

Faced with the new voting system, Andrew Yang and Kathryn Garcia, although they are rivals, campaigned together (Reuters)

The narrow margins between the favorites and the entry into force of the new system leave the door open for any of these candidates to prevail tomorrow.

However, as has happened in other elementary dates in New York, Results could be delayed for days while mail ballots, votes cast in advance and votes cast this Tuesday are counted.

Unemployment, homelessness, shootings and homicides have increased since the start of the health crisis. Thousands of businesses have closed, many wealthy residents have fled the city, and huge numbers of employees still work from home.

Maya Wiley was endorsed by Congresswoman Alexandria Ocasio-Cortez, a star of the left wing of the Democratic Party, and could be the first female mayor of New York (Reuters)

The pandemic and then protests sparked by George Floyd’s death in May 2020 in Minneapolis and attacks on Asian Americans have underscored racial inequalities in this metropolis of 8.5 million people.

The new mayor of New York will also face fiscal deficits of several billion dollars estimated for the next couple of years.

More than 191,000 people have already voted during the nine days of early voting that ended on Sunday. Tens of thousands of observed votes will also have to be counted.

(With information from AFP, AP, EFE)

New York returned to massive music events: this was the Foo Fighters concert at Madison Square Garden
New York without chinstraps or protocols: the day after COVID-19 restrictions were lifted