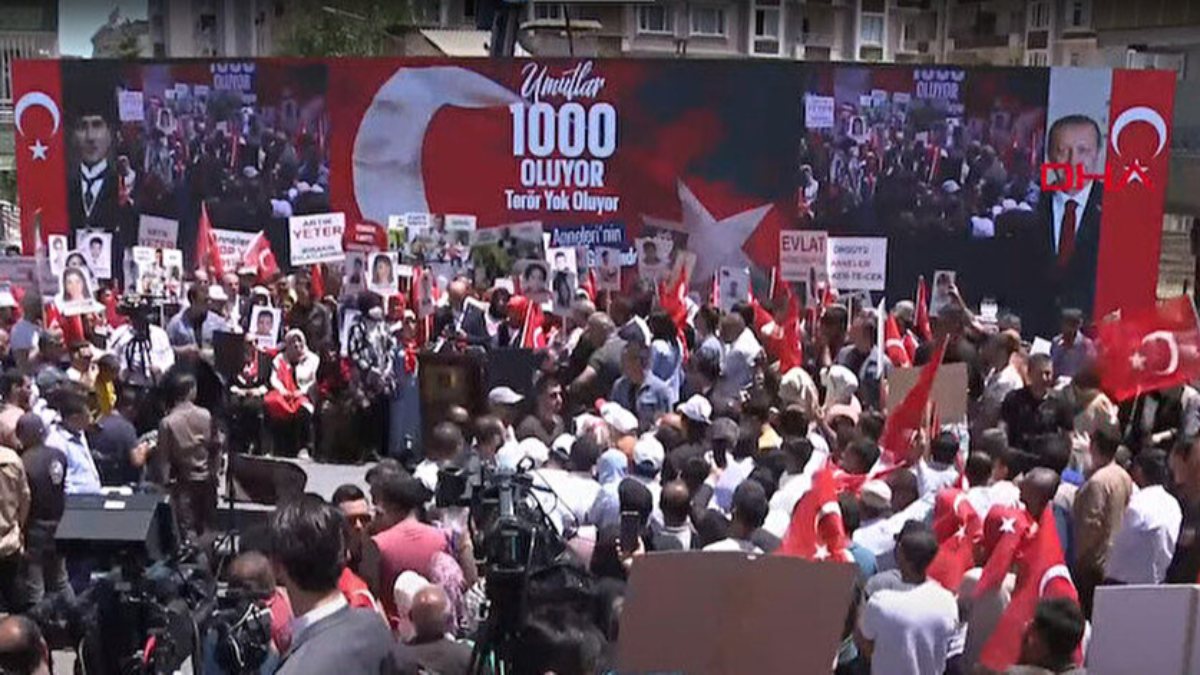 President Erdoğan addressed the mothers who resisted for 1000 days

The protests of families whose children were kidnapped by the terrorist organization PKK in front of HDP entered its 1000th day. Calling Diyarbakır mothers, President Erdoğan stated that the terror corridor would be closed.

After the son of Diyarbakır mother Hacire Akar’s son was kidnapped by the terrorist organization PKK, a process of action started.

Mother Hacire Akar, who reunited with her son with her resistance, became a hope for thousands of mothers whose children were forcibly abducted into the mountains.

Mothers are in action for 1000 days

On the occasion of the 1000th day of the resistance, a program was organized with the participation of the Minister of Interior Süleyman Soylu. President Recep Tayyip Erdoğan attended this program by telephone.

President Erdoğan addressed the mothers who resisted for 1000 days VIDEO

“You showed them that you wouldn’t give in”

The following statements came to the fore in President Erdogan’s statements:

“I would like to thank each and every one of the heartbroken mothers in Diyarbakir. I congratulate the mothers who saved their children and relatives from the terrorist organization.

You gave a very important message to the terrorist organization and the party under its command in Diyarbakır. By being the brave mothers of this country, you have shown them that you will not bow down. Your struggle, which started exactly 1000 days ago, is written in history as an epic of perseverance.

Now that the terrorist organization knows that the square is not empty, it cannot easily hook our children. The party under the leadership of the organization cannot mediate this low plan recklessly. I cannot thank you enough.

The effect of mothers on the decrease in participation

Even though the whole world is on the side of terrorists, the opposition of mothers shakes all the balances. We feel the pain in our hearts of each of our children who are deceived, abused and dragged to death.

We are completing the struggle of our mothers in Diyarbakır with our cross-border operations. Your struggle was as effective as the operations of our security forces and soldiers in reducing the participation to the organization to almost zero level.

Hopefully, the security corridor that we are establishing step by step along our Syrian borders will be completed as soon as possible. We will completely eliminate the mechanism that deceives our children and leads them to the mountain.