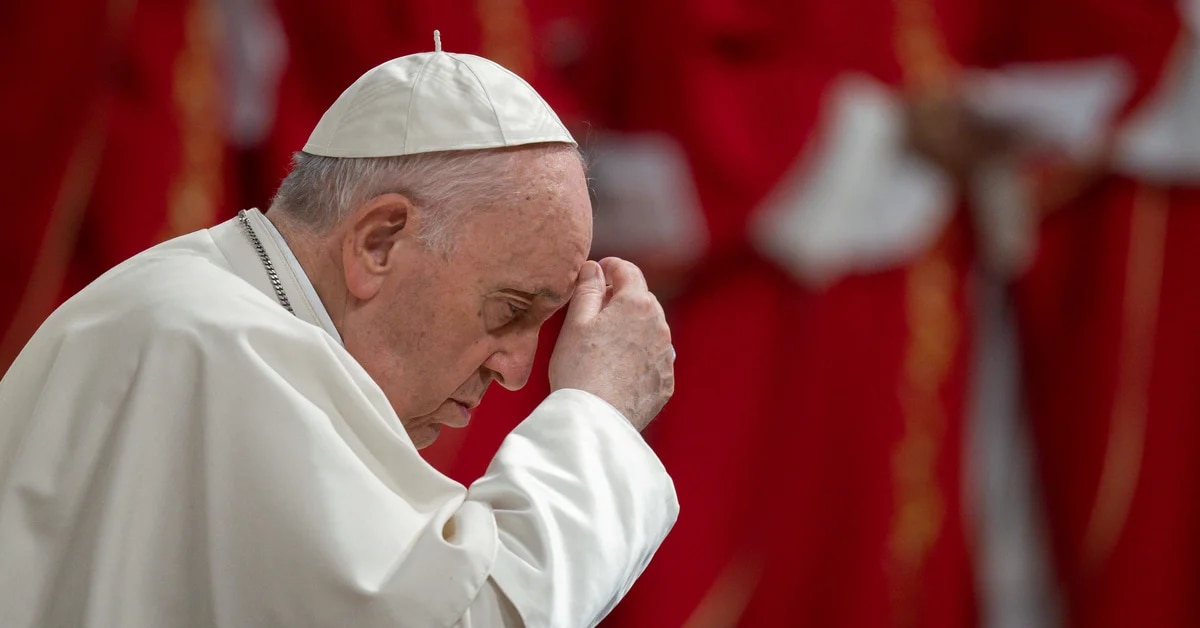 Pope Francis stated that, in his opinion, “the Third World War has been declared”. But perhaps more surprising than that is that the Supreme Pontiff considered that the Russian invasion of Ukraine “perhaps, in some way, was provoked or not prevented”, according to the transcript of the conversation he had a few days ago with the directors of the European cultural magazines of the Society of Jesus and which La Civilta Cattolica published this Tuesday.

“A few years ago it occurred to me to say that we were living through a Third World War in pieces. Now, for me, the Third World War has been declared. And this is an aspect that should make us reflect. What is happening to humanity that has had three world wars in a century?”Francis said.

Responding to Russia’s aggression against Ukraine and how it can contribute to peace, Francis stated that “you have to get away from the normal pattern that Little Red Riding Hood was good and the wolf was bad. Something global is emerging, with very intertwined elements”.

And he quoted the opinion of a Head of State that he met before the start of the war and who expressed his concern “for how NATO was moving”.

“I asked him why and he replied: ‘They are barking at the gates of Russia. And they don’t understand that the Russians are imperial and don’t allow any foreign power to get close to them’ and concluded by saying that ‘the situation could lead to war. That head of state knew how to read the signs of what was happening”Francis recounted.

For Francis, there is a danger of focusing only on “the brutality and ferocity with which this war is waged by the troops, generally mercenaries, used by the Russianswho prefer to send Chechens, Syrians and mercenaries” and that “it’s something monstrous”. 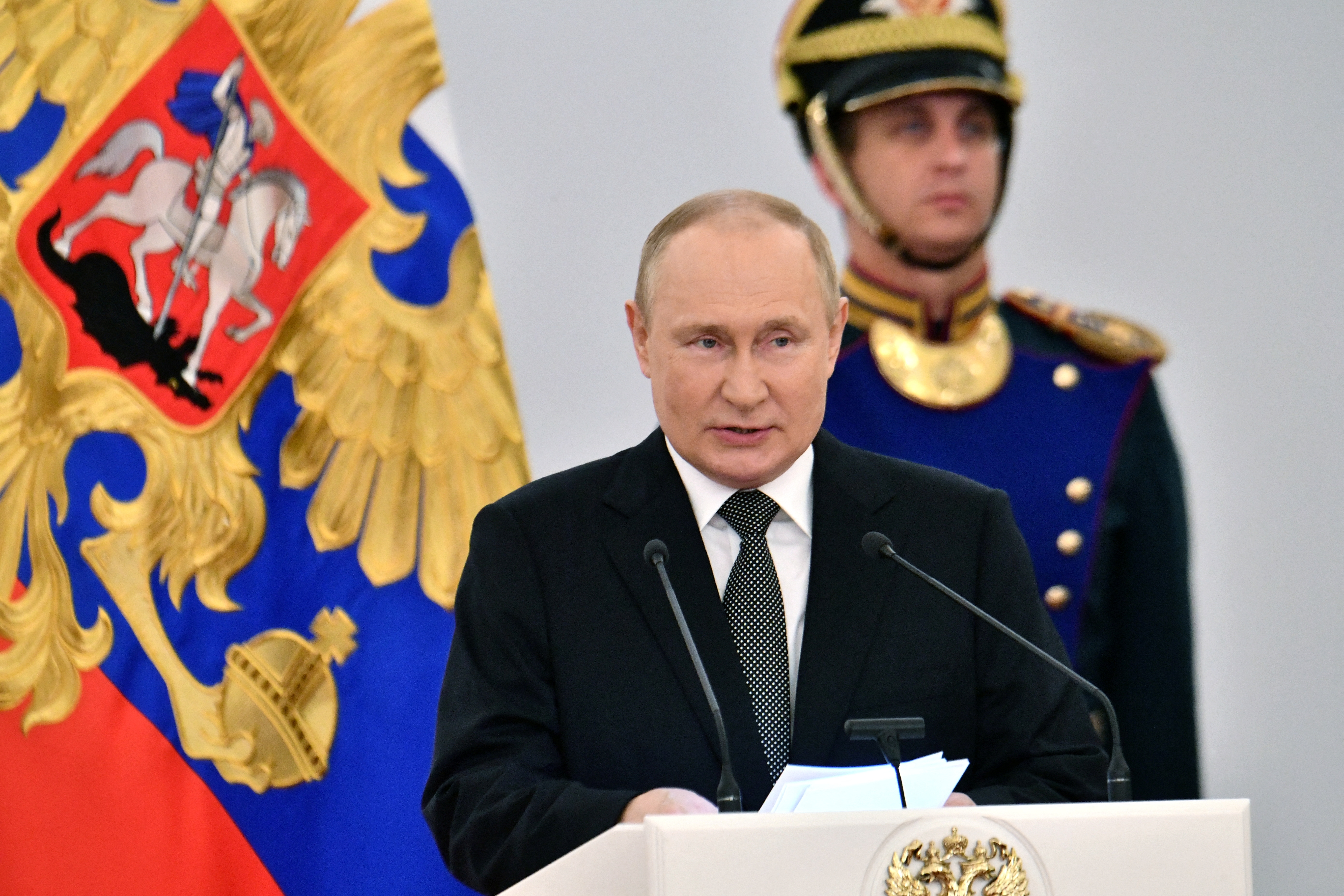 The Pope seemed to approach the positions of Vladimir Putin, although he later denied it

But, he added, “to also not see all the drama that unfolds behind this war, which was perhaps somehow provoked or not prevented. And I register an interest in testing and selling weapons. It’s very sad, but basically this is what is at stake.”

The pontiff said that some believe that with this thought he is in favor of Russian President Vladimir Putin. “No I’m not. It is simplistic and wrong to say such a thing. But I am simply against reducing complexity to the distinction between good and evil, without thinking about roots and interests, which are very complex”he asserted.

Francis wanted to reiterate his admiration for “the heroism of the Ukrainian people” and opined that “what we have before our eyes is a situation of world war, global interests, arms sales and geopolitical appropriation, which is martyring a heroic people”.

“Also is true that the Russians thought it would all be over in a week. But they miscalculated. They found a brave people, a people that struggles to survive and has a history of struggle”, he said in the transcript of the conversation, published by the Jesuit magazine La Civiltà Cattolica. 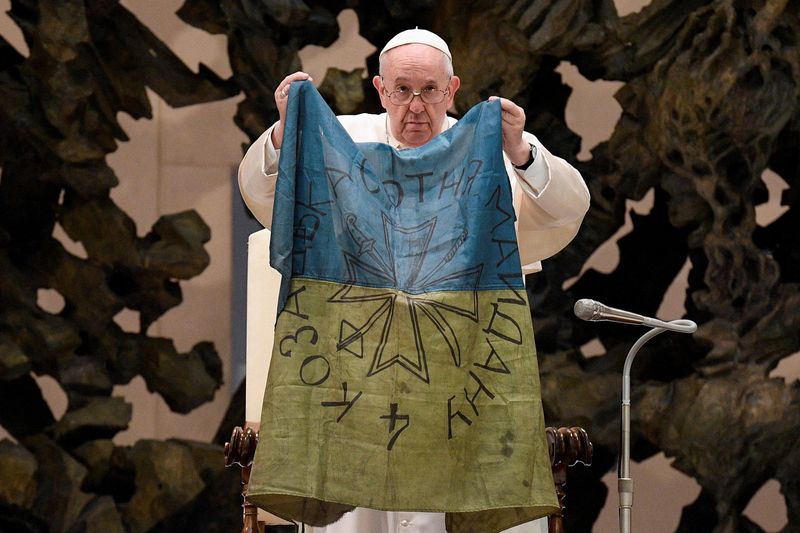 Francis holds a Ukrainian flag at the Vatican (Reuters)

The Argentine pontiff also stressed the danger that the attention on what is happening in Ukraine will diminish over time and asked: What will happen when the enthusiasm to help wanes? Because things are getting cold, who is going to take care of these women? We must look beyond the concrete action of the momentand see how we are going to support them so that they do not fall into trafficking, so that they do not exploit them, because the vultures are already circling”.

Jorge Bergoglio recounted that during the 40-minute conversation he had with the patriarch of the Russian Orthodox Church, Cyril, he read him “a statement in which he gave the reasons to justify the war” and that he replied: “Brother , we are not clerics of the State, we are pastors of the people”.

He explained that it was decided by mutual agreement to postpone the meeting that had been scheduled for June 14 in Jerusalem “so that the dialogue would not be misunderstood” and announced that he hopes to meet with the Russian patriarch in Kazakhstan in September when he attends the VII Congress of Leaders of World and Traditional Religions, to be held in Nur-Sultan.

In its message for the VI World Day of the Poor, which is celebrated on November 13, but which was advanced this Tuesday by the Vatican press office, the Pontiff criticized that meanwhile millions of women, children and the elderly are forced to seek “protection as refugees in neighboring countries”. “Those who remain in the conflict zones, live every day with fear and lack of food, water, medical care and above all love,” he lamented.

In his opinion, in these situations, “reason is obscured and those who suffer the consequences are many ordinary people, who add to the already large number of indigents.”

Secondly, The Pope lamented that there are some Christians “attached to money” who end up “getting bogged down” in poor management of heritage and assets and “chained to an ephemeral and failed vision of life”.

The Pontiff made it clear that “the problem is not money itself”, that it is part of “everyday life”, for which he has urged to reflect on the value that is given to it. “It cannot become an absolute”, the Pope settles, while stressing that there is nothing “more harmful” in a Christian community than “being dazzled by the idol of wealth”.

Francis warned that when “the only law is that of calculating profits” at the end of the day, then “there is no brake” to move on to the “logic of exploitation” of people.