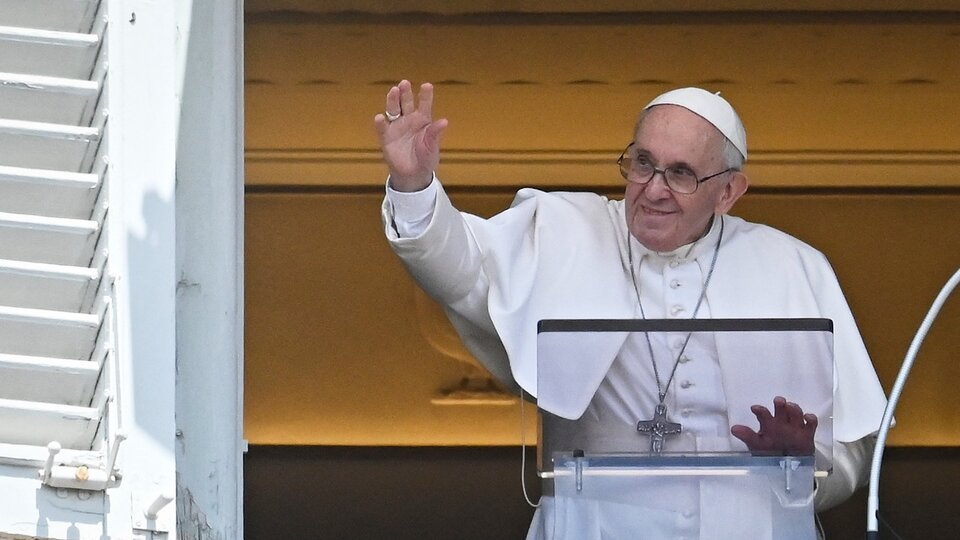 Pope Francis expressed his concern about the “difficult moments” that Cuba is experiencing as a result of the protests that broke out last Sunday and called for “dialogue and solidarity” in that country., after praying the Angelus from the window of the Apostolic Palace. Francisco, who left the hospital last Wednesday after spending ten days in hospital for a colon operation, briefly referred to the unprecedented demonstrations of sectors opposed to the government of Miguel Díaz Canel, motivated among other causes by the delicate economic situation and the effects of the coronavirus pandemic.

“I am close to the beloved Cuban people in these difficult times, especially close to the families who suffer the most.”Francisco said according to the official Spanish transcription of his message delivered in Italian. “I pray to the Lord to help him build in peace, dialogue and solidarity an increasingly just and fraternal society,” the pontiff added.

The reference to Cuba was received with applause by the faithful and pilgrims who listened attentively to his words from the Plaza de San Pedro, some of them with Cuban flags. The Pope invited the Cubans to entrust themselves to the patron saint of the island, Nuestra Señora de la Caridad del Cobre. “She will accompany you on this path,” he promised.

Francisco’s closeness to Cuba is not a novelty. The first Latin American pope in history visited the island in 2015, stage of a trip that also took him to the United States. By then met with Fidel Castro at his home in Havana, months before his death in 2016.

The Argentine pope follows the situation in Cuba and demonstrated this by discreetly mediating the historic rapprochement between the island and the United States in 2014, something that the leaders of that time thanked, both President Raúl Castro and his American counterpart Barack Obama.

The latter, in fact, confessed the “personal” involvement of Pope Francis in the process of negotiations between his country and Cuba to initiate a normalization of bilateral diplomatic relations, a process that cooled down again after the government of Republican Donald Trump.

The origin of the protests

On July 11, a massive demonstration took place in Cuba in the western municipality of San Antonio de los Baños, triggered by the economic crisis and the increase in coronavirus cases. As the hours passed, the mobilizations were replicated in other locations in the country.

The protests, unprecedented since the 1990s, during the crisis that occurred due to the fall of the Soviet Union, which was the main ally of the Cuban Executive, resulted in protesters clashes with police and government supporters. The latter were summoned by President Miguel Díaz Canel to defend the streets on suspicion of incitement to protest from outside the island.

Without a defined program or leadership, the protesters reiterate slogans of “freedom” and demand changes in the country, amid demands for a humanitarian intervention with the alleged purpose of facing the ravages of the pandemic.

Díaz Canel admits that there are reasons for social unrest, but he attributes them fundamentally to the economic, financial and commercial blockade that the United States has maintained against Cuba for more than six decades. This embargo is especially noticeable in the lack of supplies to combat the coronavirus.

The historic demonstrations provoked a first gesture from the Díaz Canel government: the authorization for Cubans to enter the country food, hygiene products and medicines, without limit of value and payment of fees, until the end of this year. On Saturday, the Cuban president denounced the spread of “lies” about the protests on the island during an act of “revolutionary reaffirmation” in the company of Raúl Castro and in front of tens of thousands of supporters.