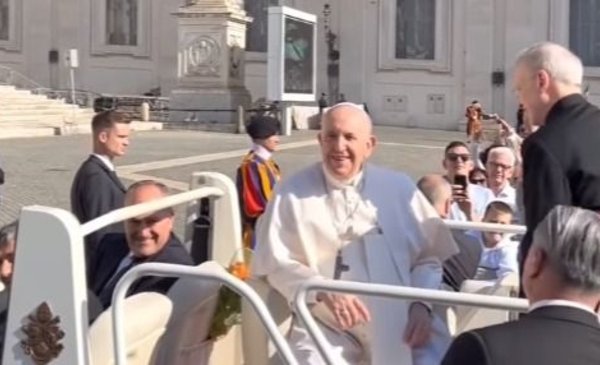 Pope Francis and a witty request for his health: “A little tequila”

On board the “Mobile Pope”, the Pope Francisco had a fun time The Vatican. A Mexican priest asked him how he was in health and as a result of that a particular exchange of words was generated accompanied by a suggestive request from the Argentine.

Prior to his general audience this Wednesday, he greeted a handful of future priests from Mexico. There one of them called Rodrigo Fernandez de Castrowho lives in Rome and studies the priesthood, took the floor and caught the attention of the Supreme Pontiff. “Pope Francis, how are you with your leg, your knee?” He asked.

She immediately looked up and replied, “Very capricious.” The health problems that concern him have to do with a the rupture of a ligament, for which he was going to be intervened with infiltrations and since he was unable to walk, he was seen a few days ago in a wheelchair.

“Thank you for your smile, your joy, for being here despite the inconvenience, you give us a lot of example also to future priests,” said the Mexican while Bergoglio was about to leave in the “Mobile Pope” from the Plaza de Saint Peter. At that moment he revealed what you need to ease the pain.

“Do you know what I need for my leg? A little tequila,” the Pope released to the laughter of all those present. Another of the priests who accompanied Rodrigo Fernández de Castro retorted: “If one day we go to Santa Marta, we’ll bring you a little bottle.”

The particular moment was captured because the future Mexican priest filmed everything with his cell phone. Hours after the video was published, it was shared everywhere and went viral through the different social networks..

Jey Mammón surprised by recounting a memory with Pope Francis that caught the attention of all those present at The Rock of Morfi. The cycle mimic phone personified the highest authority of the Catholic Church in the world and the humorist traveled to the past, when he dedicated himself to catechism.

“I’m excited to see it. What happens is that I’ve seen it so many times that for me it’s like a friend, like a buddy,” Mammón began in dialogue with Pato Muzzio in the skin of Jorge Bergoglio. Mammón served as a catechist during his youth, when the now Pope was Archbishop of Buenos Aires.