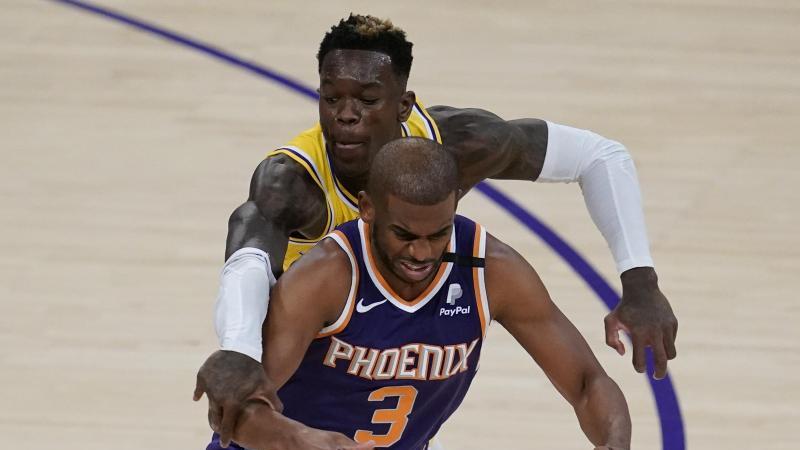 Los Angeles (AP) – Dennis Schröder does not want to say goodbye to Los Angeles with a playoff clap and also play for the Lakers in the coming NBA season.

Less than an hour after the defending champion’s 100: 113 defeat against the Phoenix Suns and the 2: 4 loss in the first round, the 27-year-old Braunschweig tried to wipe all speculations about a farewell after just one year. Before he announced his participation in the national team’s Olympic qualification tournament at the end of June, he sent even clearer signals to the Lakers fans.

“Gonna rip my butt off”

“I’m going to work my butt out to come back here and give everything. We owe the fans more. I’ll be back and forth this summer, come back and be myself. I want to be here and win a championship,” said Schröder . When the hall spokesman asked for a final round of applause for the failed record champions, Schröder snuck from the field with his head hanging. After the shower, however, the national player radiated confidence again – for his personal future and that of the failed Lakers around the superstars LeBron James and Anthony Davis.

“We’ll be back next year. Everyone will be healthy, it will be great,” he predicted. After the mini-break following last season’s title and the additional stresses caused by the corona pandemic, the professionals from Los Angeles can take an unusually long breath and regenerate before the start of the coming season.

In particular, James and Davis, who have been injured for a long time this season, can use it well – Davis failed in his attempt to help avert the end despite an injury and had to abandon it in the first quarter. “Number one is we have to get AD healthy. We have to get my ankle ready. And then we start from there,” James said.

20 Schröder points are not enough

Schröder could not have a decisive influence either, despite the 20 points after the catastrophic first half. Together with speculation before the game as a result of an alleged change to his Instagram profile, it seemed immediately after the game that he might have played in the Lakers jersey for the last time.

Finally, he had reportedly rejected a four-year contract with a total volume of 84 million US dollars in the spring. However, Schröder already said what he now repeated: “This is my eighth season in the NBA. And I wanted to make my own decision once. Once.” The Lakers are a great organization and he feels good. “At the end of the day I want to be here and win a title. It wasn’t about the money. Sure, it should be fair. But at the end of the day, it’s not about the money.” Hesitation has damaged his reputation in the city, and the understanding of the Lakers is limited. But if you are successful in the coming season, that is quickly forgotten.

Next goal: to the Olympics with the DBB team

Before that, Schröder wants to go to the Olympics with the German national team. “National team, if I’m not injured and feel good, I’ll be there,” said Schröder after the playoff from the German press agency. The association hopes of course that the point guard will agree. “We hope that he is not too disappointed now and would of course be very happy if he would be there in the summer,” said the sports director of the German Basketball Federation, Felix Leuer, of the dpa. Schröder’s buddy Daniel Theis, on the other hand, will be absent. He canceled the association to look into a new NBA contract.