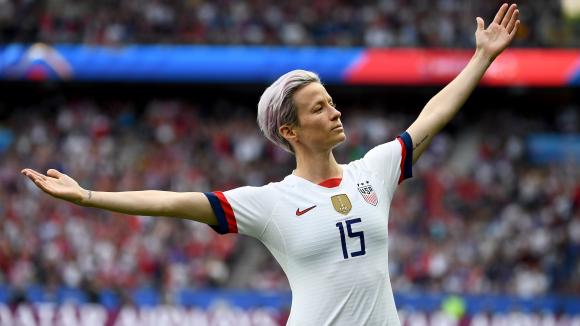 Planète Sport, the summer meeting which explores subjects on the border between sport and politics, takes us to the United States on Friday to meet the soccer player Megan Rapinoe. The attacker is openly committed to the defense of minorities. If she is known for her positions within the LGBT community, she is also engaged on several other fronts.

Many French people discovered it last summer. The 2019 Women’s World Cup is organized in France, and a player, hair dyed purple, leads her team to victory: Megan Rapinoe. A few months later, the striker won the Women’s Golden Ball.

Excellent on the pitch, Rapinoe is also making a name for herself beyond sport. A fervent LGBT activist, she does not hesitate to shout this message after eliminating France in the quarterfinals of the World Cup: “You can’t win a tournament without gays on the team!”

Since she is known, Megan Rapinoe tries to be a model for homosexuals who do not dare to assert themselves, in sport and in society. “Being a gay athlete, being a soccer player and giving the best of myself is important. It gives young people an example, the model of someone who takes responsibility and is recognized as such. “, says the champion in a promotional video. Born into a conservative background, Megan Rapinoe suffered from feeling different. Today, she feels that she has a responsibility with the youngest.

Megan Rapinoe’s commitment goes well beyond the LGBT minority, as Marie-Cécile Naves, a specialist in the United States, explains. The footballer is involved in many other areas. “It is her commitment on several fronts that it is interesting to observe in Megan Rapinoe , describes the researcher. When she knelt in support of Colin Kaepernick, an American football player who refuses to sing the anthem and kneels down, she showed her support for the protests against the death of George Floyd and, more recently, to the Say her name movement, which denounces police violence against black women and that it also fights discrimination against the LGBT community, Megan Rapinoe wants to show the universality of progressive struggles. “

Few activists are so visible in the United States and carry a universality of progressive struggles, of an inclusive society that does not prioritize the fights against discrimination. This is what Megan Rapinoe stands out for.

Megan Rapinoe is a pretty exceptional case in sports “She’s really committed. She’s not in the posture of someone who clicks on Twitter to say ‘discrimination is wrong’. She really acts., continues the researcher. She makes donations to associations, she takes part in conferences, she supports a number of causes. She is not in an opportunistic and ad hoc posture, it is really a long drawn out fight. “

Despite her success and her media exposure, Megan Rapinoe is not in a process “individualistic”, notes Marie-Cécile Naves. “She shows a leadership of solidarity, cooperation and exemplarity, which is quite exceptional in the world of sport. And as she wins everything, Olympic champion and world champion, she has the image of a winner, of a fighter, which contrasts deeply with the image of ‘winner‘that President Trump wishes to embody. We are witnessing a face to face of two images of the win. Trump the individualist who crushes others and Rapinoe who advocates solidarity. “

Is a political destiny emerging around Megan Rapinoe? Vice TV asked him the question last May, and here is his answer: “I don’t fully close the door, but it sounds crazy, she explains, laughing. If I go for it, I want the biggest function : president ! I will then choose people who are much smarter and much more qualified than me to do the job right. I am absolutely not qualified for any government position, but if that happens, I will know how to surround myself. “

With the emergence of new political figures, especially among the Democrats, Megan Rapinoe could find her place. Unless his political commitment is no longer effective in civil society, as for Michelle Obama. While waiting for the supreme office, Megan Rapinoe has other fights in progress. In September, justice must rule on a request from the player and all her team: have the same salary as the men’s team …