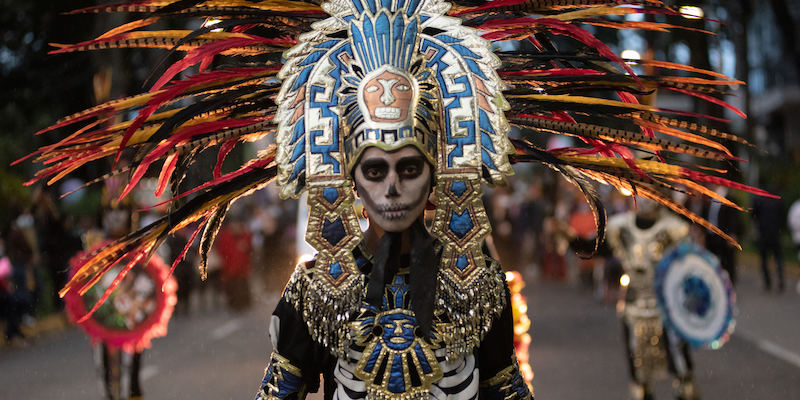 Photos of the Day of the Dead celebrations in Mexico

The Day of the Dead, or “Día de Muertos”, is one of the most heartfelt and famous celebrations in Mexico and among Mexican communities in the world: every year, between October 31 and November 2, Mexicans adorn their homes, the streets and cemeteries, and gather in parades that last several days in which the dead are remembered by dancing and singing. They are very popular holidays, which last several days and also attract many tourists. Similar celebrations are also organized abroad, for example in California, Texas and in countries where Mexican immigrant communities are numerous.

In 2020, the official demonstrations planned in particular in Mexico City had been largely canceled due to the coronavirus pandemic, but this year, given the improvement in the situation, various parades could be held throughout the country.

The Día de Muertos is celebrated in the area of ​​Mexico and Central America, which was home to cultures such as the Aztec and Mayan, even before the arrival of the Spaniards. After the colonization it became a mestizo festival, which is celebrated according to the Catholic calendar (November 2 according to the Church is the day of the commemoration of the dead) but is extended for several days and still has its own characteristics.

Tradition has it that between 1 and 2 November the dead return to visit their families to spend time with their loved ones who are still alive. For this reason, altars with offerings are prepared in homes (Offerings) of food and drinks, which are then consumed by families: the most famous of these Offerings it’s sugar skulls, that is, sugar sweets in the shape of a skull, and the bread of the dead, sweet loaves with bone-shaped decorations. In the communities where it is celebrated, however, the Día de Muertos is also a cheerful and ironic party, in which people dress up as skeletons and parade down the street, with celebrations similar to those of Carnival, which last many days and involve all the cities .

In the Día de Muertos the graves of the dead are also decorated: with candles, with Offerings of food and with the typical cempasúchil, a Mexican flower with orange petals that looks like a chrysanthemum. The candles and the cempasúchil, according to tradition, they show the souls of the dead the way home. In many regions, families spend all night in the cemetery, watching by candlelight.

See also  Rose Revolution Day: I also experienced violence at the birth of my daughters